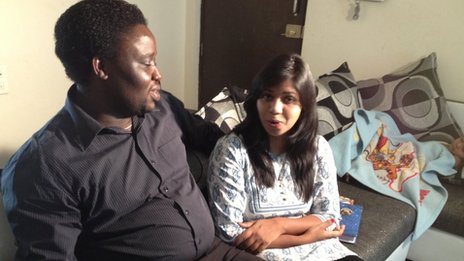 Nigerian Sambo Davis is married to an Indian woman and lives in Mumbai.

All his documents are valid, but he was arrested by the police recently on suspicion of being a drug dealer.

He and 30 other black Africans were detained for hours before they were let off with an apology.

But the following day, Mr Davis said that he was shocked to read in local newspapers that they were “arrested for drug peddling”.

“The police treat us Africans like dogs,” he says.

Mr Davis claims he often faces discrimination when he goes to restaurants or when he tries to rent an apartment in gated middle-class communities.

If Africans don’t have papers, then deport them, don’t put them in jail”

But he is nevertheless one of the lucky ones. He found a decent flat to rent, thanks to his Indian wife.

But his fellow countrymen, he says, still face discrimination: “When they go to rent flats in a normal building they are told – ‘you are a black man, you are Nigerian, and you are not wanted’. This is racism.”

There is no official data on how many Africans live in Mumbai, but since India’s economic progress gathered momentum in recent years, many have come to work in and around the city. Unofficial estimates put their numbers at more than 5,000.

Most of them are engaged in exporting garments to Nigeria and other African countries.

Many others are students, enrolled in the region’s prestigious educational institutions.

But there are also hundreds of Africans, mostly Nigerians, who live as illegal immigrants in India. They have either “lost” their passports or their visas have “expired”.

Every day, these people play hide-and-seek with the police – if they are caught, they are sent to jail.

Ikeorah Junior from Lagos runs a cafe for Africans in a crowded market on Mumbai’s Mohammed Ali Road.

“I don’t understand why they [police] have to go from house to house to arrest the people who don’t have their papers. If they don’t have papers, then deport them, don’t put them in jail,” he says.

Ahmed Javed, who is in charge of maintaining law and order in the state of Maharashtra, says it is not that simple: “In most cases they have no passports. So, unless their nationalities are determined, they cannot be deported.”

Dozens of Africans have taken up residence on Mira Road, a dusty, nondescript town just outside Mumbai.

One “illegal immigrant” there asked me for money, claiming he had not eaten for two days.

He looked worried and told me that he had been approached by drug dealers to work for them. 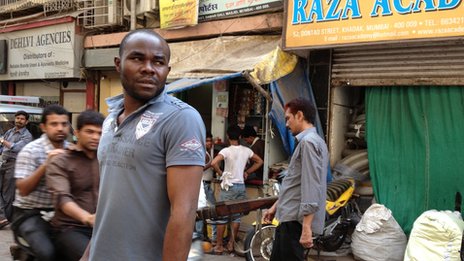 Many Africans face discrimination when they try to rent apartments

“I have been here for three years – my visa expired a long time ago. I want to go back home. Please help me, brother,” he tells me.

In this neighbourhood, Negro or kaalia (black in Hindi) are the two words indiscriminately used to describe all black people.

“We call them Negro because they are black. They look frightening,” says one woman.

“They don’t find homes to rent in Mumbai, they only stay in Mira Road. Why? Because of the way they behave. They sell drugs and indulge in other illegal activities. They cannot be trusted,” a local man commented, seemingly unaware of the offensive nature of his words.

Against such a backdrop of pronounced prejudice, Sheeba Rani married Sambo Davis four years ago and the couple have two children.

Mrs Davis says her parents are enlightened Christians and they blessed them because they thought the marriage was God’s wish.

But, she says, she has been ostracised by many friends, relatives and society since her marriage.

Mrs Davis is “embarrassed and ashamed” by the behaviour of the Indian people towards black Africans. 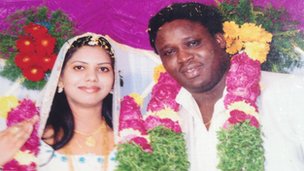 “When I used to go to a mall or if I walked with him, I always wanted him to hold my hand. But when people saw me with him, they thought I was from a bad family or even a prostitute.”

Earlier, she did not understand why black people were being looked down upon, but now she says she does.

“Because our society is obsessed with white skin. If I had married a white man, I would have gained more friends and society’s approval too.”

Mr Davis believes that the discrimination is solely “because I am a black man”.

“It’s because I am from Africa, I am a Nigerian. I think Indians see us as inferior.”

Yet despite the discrimination they face, nearly all Africans the BBC interviewed said they had a soft spot for their adopted country.

They say the relations between India and Africa are “rock solid”. Many argued that Indians and Africans are brothers.

“We look after Indians in our countries. They have become rich there. All we want here is for Indians to understand we are not drug dealers. We are not violent. We are just like them.”