SC under pressure to probe another law intern harassment case

Pressure mounted on the Supreme Court on Friday to probe into the allegation of sexual harassment levelled by a second law intern against another retired judge of the court. Mail Today broke the story three weeks ago about the second intern’s complaint to the Chief Justice of India P. Sathasivam at a time when the row over retired Justice A.K. Ganguly was at its peak.

The second intern alleged she was sexually harassed twice by the judge at his official residence at a time when he was serving as a judge in the Supreme Court. The judge is at present heading a statutory body (which reports to Parliament) in Delhi as a post-retirement assignment.

The second intern, also a former student of West Bengal National University of Juridical Sciences, Kolkata, like the intern who complained against Ganguly, had sent the complaint against the other judge in the last week of November 2013, even as a three-member judge panel was in the process of probing the charges against Ganguly. 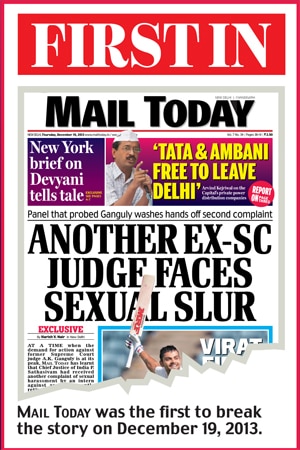 But she was told that there will be no action taken on her written complaint. In a full court meeting (attended by all the judges of the Supreme Court) convened on December 5 to take a call on Ganguly issue, a decision was taken that no more complaints against retired judges will be entertained by the court.

Therefore the second intern’s complaint was returned without any action and the decision of the court was informed to her.

The second intern said she was encouraged by the stand taken by her fellow student who complained against Ganguly. “I had not made any formal representation to any authority. I was a student who was about to start her final year in law school and I was not sure if I could withstand the public and legal scrutiny that would invariably follow. However I recently came to know about a complaint made by a law intern. The promptness with which Supreme Court set up committee gave me courage” Additional Solicitor General Indira Jaising, who had spearheaded a campaign against Ganguly, has now come out in support of the second intern.

“I am very clear that action should be taken and an inquiry should be done by the Supreme Court against the then sitting judge against whom the allegations have been levelled,” she said.

Jaising said the intern is all set to challenge the administrative decision of the full court not to act on her complaint through a petition on the judicial side.

The ASG was of the view that the administrative decision of the apex court should not come in the way of holding a thorough inquiry into the alleged incident and she has information that the resolution of full court is not acceptable to the intern.

“Since the intern has reposed confidence in me and shared her affidavit, I am aware that it is Justice Swatenter Kumar,” Ms Jaising said.

In her detailed affidavit to Chief Justice Sathasivam, the lawyer, “On one occasion, the judge placed his hand on my lower back. I felt quite uncomfortable and disturbed… he asked me if I would be comfortable travelling with him during the internship, and staying in hotel rooms… I felt extremely awkward and uncomfortable.”

But the top court reportedly told the young lawyer that it couldn’t act against the judge, as he had already retired. A similar stance adopted by the Supreme Court panel during the Justice Ganguly case had invited much criticism from activists. But unlike in the latest case, Justice Ganguly was not a sitting judge when he allegedly sexual harassed his intern.

Ms Jaising was among those at the forefront of an aggressive campaign, seeking Justice Ganguly’s removal. She had also made public the statement of the young lawyer to the judges’ panel probing the case.