#India – After Rape and Neglect, A Survivor’s Family Fades into Oblivion in Delhi #Vaw #Mustread 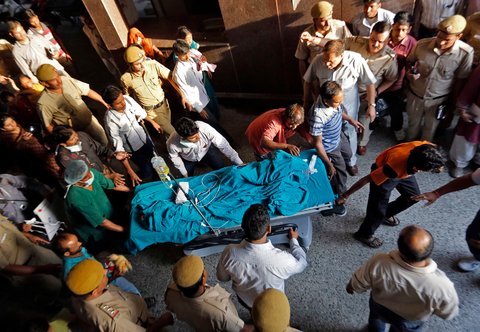 Adnan Abidi/ReutersA five-year-old rape victim moved from Swami Dayanand hospital to the All India Institute of Medical Sciences for treatment in New Delhi on Apr. 19.

In April, a 5-year-old girl was raped and tortured in eastern Delhi, then left for dead, with her internal organs and private parts damaged. The horrific nature of the crime set off a renewed fury in the streets of Delhi, which had already seen thousands of people protest after the gang rape of a 23-year-old student on a moving bus. Five months later, the public’s outrage has moved on to other rape cases, like the one in Mumbai, where five men are accused of sexually assaulting a young photographer. Meanwhile, the 5-year-old girl, who was nicknamed “Gudiya” (“Doll”) by the Indian press, and her family struggle on their own to help the girl recover from the trauma of the rape. On a July afternoon, the girl’s father, stood in the corridor outside the Intensive Care Unit at All India Institute of Medical Sciences in New Delhi. A small patch of translucent film pasted on the glass door of the intensive care unit had come off. He peered through the opening in the door and waved his hand every few minutes to his daughter, who was lying on a bed in the I.C.U.   With two pillows propped up under her, Gudiya, with her short, wavy hair, wore a purple frock, as a white sheet covered her lower body. Her father was waiting to meet her after her fifth and last reconstructive surgery, this one for her colon. During the rape, Gudiya’s internal organs had been damaged, so she had needed an immediate colostomy, which required a bag to hold her body’s wastes. “The passage for the stool would leak every half an hour,” said Gudiya’s mother, a wiry woman in her mid-20s, who wore a blue and yellow sari and had shabbily tied her hair into a bun. The surgery was a success. Gudiya, seeing that she no longer needed a colostomy bag, pointed to her stomach and screamed in glee, “Papa, everything has gone inside!” It was one of the very rare moments of joy the family had experienced since Gudiya was found semiconscious in an abandoned apartment near her home in Gandhi Nagar in eastern Delhi. The area is populated by daily wage laborers and factory workers, many of them working in the massive textile market of the area. Gudiya’s father, a laborer, had moved from flood-prone Sitamarhi in Bihar state, which is among the 100 poorest districts in India, to Delhi in 2010. He found work as a construction worker and earned close to 200 rupees ($3) a day. Around the same time, his younger brother, also migrated to Delhi to work at a bicycle shop. Gudiya and her mother came to New Delhi last year after her father found regular work. The family lived in a cramped single room with a tiny window in a Gandhi Nagar building rented to poor workers. The 20 families on their floor share a few bathrooms and toilets at the far end of a corridor. Gudiya’s mother had never left her village in Bihar before she and their child joined her husband in Delhi last year. The city had overwhelmed her, and she feared for her husband’s safety as he went to far corners of the expanding metropolis to work as a laborer. He had bought her a cheap mobile phone to reassure her. On April 16, Gudiya’s father and his younger brother were at the New Delhi railway station, dropping off their third sibling, who was returning to Sitamarhi to sow paddy on their ancestral land. Her father’s phone rang. Her mother was on the phone. Five-year-old Gudiya was missing. After her father received the alarming call from his wife, he and his brother rushed home and looked for Gudiya. They went to the local police station. Dharmpal Singh, the officer in charge, shooed him away, according to Gudiya’s father. “Go and look for her yourself. Inform us if you find her,” Gudiya’s father recalled the police officer telling him. 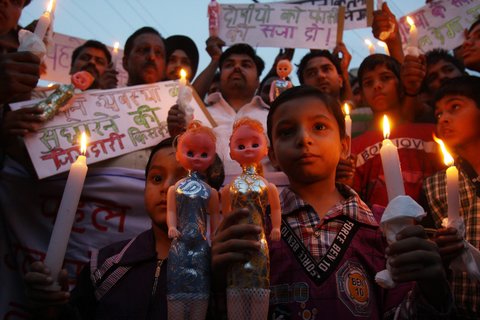 Raminder Pal Singh/European Pressphoto AgencyA candle light vigil in Amritsar, Punjab, on Apr. 22 to protest the rape of a five-year-old girl in Delhi.