India has hardly been a haven for journalists.

For years, reporters and editors have faced harassment, coercion, and threats from vested interests in the government as well as private ones. A number of them have even been killed for performing their duty or voicing an opinion. No wonder India is the third-most dangerous placeto be a journalist, behind war-torn Iraq and Syria.

But something seems to have changed this September.

Gauri Lankesh, a Bengaluru-based senior journalist and editor of the Gauri Lankesh Patrike, was gunned down outside her home on Sept. 05. What began as crass exultation over her killing among sections of social media users and even political opponents now seems to be degenerating into even more threats—some even brazenly promising copycat attacks on journalists. In fact, the jubilation was followed by a “hit list” of media people. 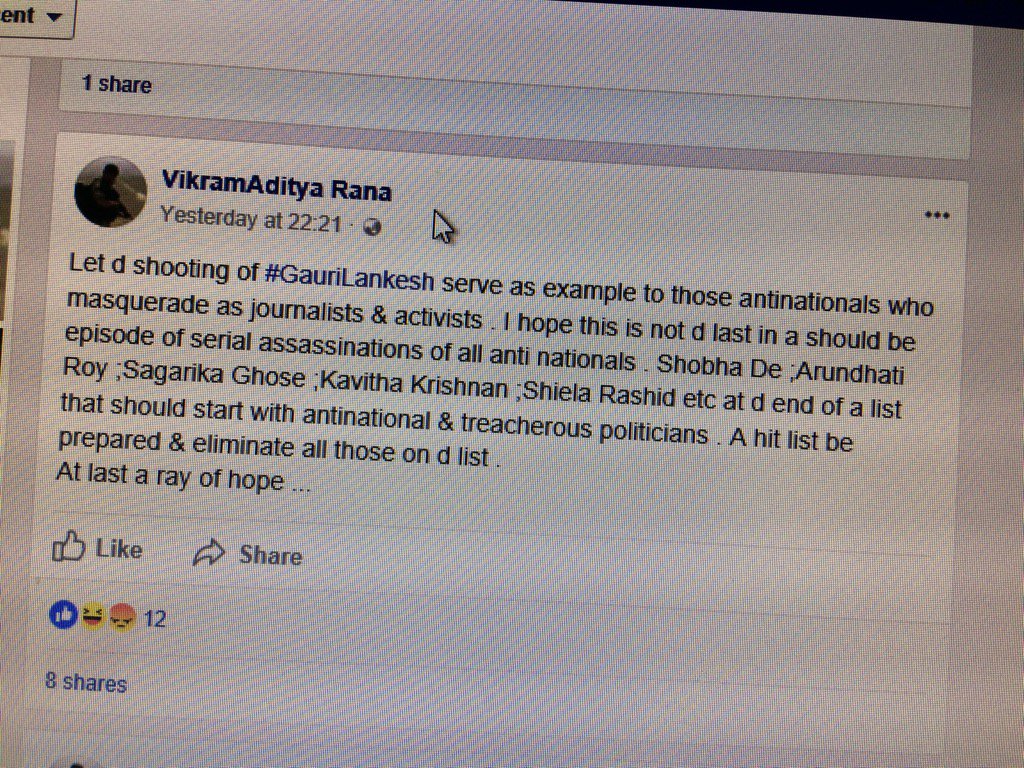 Here he is again : VikramAditya Rana on Facebook with a hit list. @DelhiPolice you need to check this

There wouldn’t have been reasons to take these seriously if not for even more murders since Lankesh’s death.

On Sept.20, Santanu Bhowmik, 28, a reporter with the Din Raat television channel, was killed in the northeastern state of Tripura. He was allegedly abducted by a local tribal outfit and stabbed to death. A probe is on.

Three days after Bhowmik’s death, another senior journalist, KJ Singh, along with his mother, were found killed at his residence in Mohali near Chandigarh, the capital of Punjab. Singh, who was in his late 60s, had been a former news editor with The Indian Express newspaper and also worked for The Times of India and The Tribune.

Meanwhile, four journalists based out of New Delhi and the Delhi National Capital Region have received death threats via text messages and calls. Reports say that others who have received such vile messages have not followed up. Those issuing the threats often use Lankesh’s death as a template to strike fear.

The probe into Lankesh’s murder hasn’t yielded any results yet. However, the police have found similarities between the incident and a few earlier gruesome ones from the last two years involving the killings of elderly rationalists, social activists, and intellectuals. The one thread connecting all these is that the victims were vehemently opposed to Hindu extremism and were vocal about it.

D N Jeevaraj, a local legislator, openly claimed that Lankesh would have been alive if she had not spoken up against the Rashtriya Swayamsevak Sangh (RSS). The RSS is a Hindu nationalist organisation and the ideological mothership of the Bharatiya Janata Party (BJP), to which both Jeevaraj and Indian prime minister Narendra Modi belong.

Not surprisingly, a number of those who issue such threats and pass crass comments against journalists on social media describe themselves as Hindu nationalists and supporters of the BJP or RSS. In fact, many of them even claim to have the blessings of Modi himself. As if to validate their claim, the prime minister follows a number of their Twitter handles.

For instance, Ravish Kumar, a senior editor with the Hindi news channel NDTV India and its prime time anchor, received through a WhatsApp group a message expressing grief that he was still alive. Kumar said he was being repeatedly added to such groups that then go on to abuse him. When Alt News, a website that works at busting fake news and urban legends, tracked the numbers issuing abusive messages to Kumar, it zeroed in on one Niraj Dave.

Dave, like many others trolls, is followed by Modi.

Several appeals have been made to the prime minister to stop backing such anti-social elements. To drive home the point, a #BlockNarendraModi campaign was set off following Lankesh’s murder.

However, all these have not just been ignored but even actively defended by the BJP’s spokespersons.

On Sept. 29, Kumar himself penned an open letter to the prime minister. He wrote:

Whatever he (Nikhil Dadhich, a troll who abused Lankesh on Twitter after her murder) said about Gauri Lankesh after her death, you may not like it and I am sure you do not sanction it, but the fact is that you still happen to follow him if my information is correct. Recently, Amit Malviya, chief of the BJP’s IT Cell, shared a distorted video of my speech designed for misrepresentation. Even after AltNews revealed the truth, Amit Malviya expressed no regret.

In the meantime, abusing journalists is almost a national pastime on social media. The tiniest of provocations unleashes the vilest of expletives.

One journalist with the Quint news website was subjected to online harassment and even rape and death threats that resulted in her story being pulled off the site. And all that her video story had done was call out the sexism and abuse in the lyrics of a song.

Dhanya Rajendran of TheNewsMinute website was subjected to offensive tweets following a casual comment of hers about a Tamil language movie. #PublicityBeepDhanya received over 30,000 tweets, mostly derogatory.

Recently, the International Federation of Journalists (IFJ) expressed its concern over attempts silence the freedom of press in India.

Under Modi Government, VIP Hate Speech Skyrockets - By 500%
Maharashtra - 40% cut in gender budget allocation, although 48% of women in the state are anaemic
Remembering Wilma: First modern woman chief of the Cherokee Nation
US signs MoU ( death certificate ) for building nuclear plants in India