#India and the Power of Unkept Promises

Guest Post  by Anuj Wankhede
THE POWER OF UNKEPT PROMISES
Not many people would have heard of a person R.K Gupta from Mumbai. Earlier this year we spoke with him, and he had some telling insights about the functioning of the Indian Nuclear power industry and what really happens in the background.
This is his story. 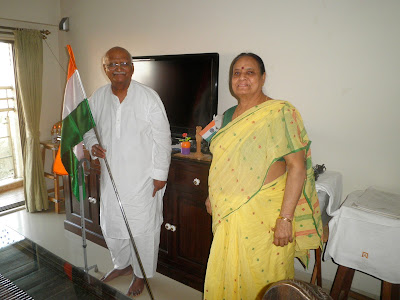 BUT FIRST THE BACKGROUND:
India should listen awaken and try to understand exactly how this country functions despite over 60 years of this so called “Independence” from British Raj.
And as India gears up to display and show-off its military might on 15th August, one needs to also ponder and reflect on the fate of the sailors aboard the submarine which India has lost just a day before its Independence Day.
India has today has become a nation which can be easily bought.
Everything in India is today on a fire sale. From politicians, to journalists, media, bureaucracy, police, and courts……all are “buyable”, naturally, only if the price is right. That price is being set by foreign companies and it’s a huge price!!!
These companies can afford to pay the price because India is such a huge market for any product and the profits are practically limitless when compared to the investments which these MNC’s and trans-national companies have to make before setting up shop in India.
This shift started somewhere in the 1990’s when India – under current PM Manmohan Singh’s wisdom – decided to “liberalize” its economy and opened the flood gates for foreign investments into India. The decision to do so was motivated by the IMF and World Bank (which are totally controlled by the US and European countries.) And politicians from across the spectrum have embraced this as a solution to all problems in India – from poverty to health to transport and to practically everything……All has been sold out to foreign companies..
Why is India celebrating an Independence Day?
It is more of a joke now because this is now a country where Gandhi led a struggle against the British and independence was “earned” at a huge cost of lives and a long struggle. And yet, today, the country wallows in its supposed dependence from Foreign Direct Investments (FDI) or on Foreign Institutional Investors (FII) money to prop itself up!
All this has hurt this country badly – its social fabric has broken down; the poor have become poorer and on the whole it has caused enormous losses which are not measurable in monetary terms at all.
One such person who has been a victim of this Independent India is one Mr. R.K. Gupta.
NOW: 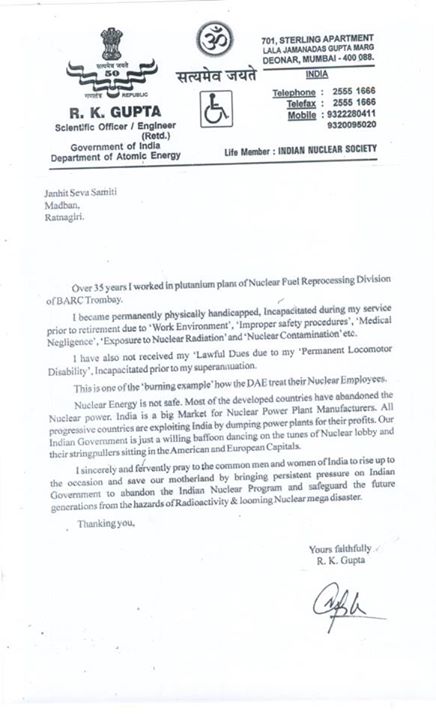 India has in a way been sold away to the nuclear industry – although nuclear power contributes barely 2-3% of the Indian power generation. But the gains for this industry, the bureaucracy as well as the “nuclear scientists” is so huge that a person like R.K. Gupta has been left crippled and in a bad shape at an age when the establishment which employed him should have been caring for him.

R.K. developed psoriasis,and also got a hip injury while working at the Bhabha Atomic Research Centre (BARC) in Mumbai. He was diligent at work and hence never complained about the working conditions at the Plutonium extraction facility where he served for 35 long years -Silently.  He joined BARC and he retired from it believing in the Homi Bhabha dream of making India into a nuclear super-power.

Yet, today he has many serious health problems; he has written to the government about them, and what is worse is that nobody has even acknowledged his issues. As he says, when he was seriously ill, the officials and hospital authorities manipulated his seriousness of health and he had no recourse to claim any compensations or to go to court for any kind of assistance.
R.K. Gupta worked in the plutonium extraction division with BARC which makes the raw material for the Indian Atomic (nuclear) weapons that are supposed to be a “national pride”. And yet this man has been left practically on the streets by the very organization he worked with for decades!!!
He has been denied benefits accruing to him out of retirement and service for the many decades he served in that hazardous job at the Nuclear Fuel Extraction facility at BARC and now he has been tossed out like a vegetable. His thoughts are for the poor farmers, fishermen and ordinary people who will continue to face the brunt of the high handedness of the Department of Atomic Energy (DAE) in Delhi and these officials will continue to sit in their plush air-conditioned offices and claim that nuclear energy is ‘safe’.
And this is what India has got for its independence -:
Dependence on Russia for the Kudankulam nuclear project, Dependence on France for the Jaitapur project, Dependence on USA and Japan for the Mithivirdi and Kovadda projects…..
Sure, and this is the REAL INDEPENDENCE  INDIA has obtained from the British!!!
Let’s all celebrate the sellout of a nation on this Independence Day with R.K.Gupta and salute our corrupt establishment which has become a source of extraction of resources and energies of people and no care for them once extracted.
A nation that has tumbled down in the world corruption index and fares poorly to be seen as one of the most corrupt nations. (Transparency International)
A nation that does not see shame about the fact that it has seen the most number of scams and scandals in the world.  (Read more here about them.)
Happy Independence Day, India.