Advanced democracies have banned them as they are tamperable, so why is the EC adamant on proving this wrong? And do citizens have the right to know the correct election results?

India’s Emergency era just completed its 42nd year. This was how civil rights stalwart Rajni Kothari had described the state-of-affairs during that period: “It was a state off-limits, a government that hijacked the whole edifice of the state, a ruling party and leader who in effect treated the state as their personal estate. It was the imposition of a highly concentrated apparatus of power on a fundamentally federal society and the turning over of this centralised apparatus for personal survival and family aggrandisement. It was one big swoop overtaking the whole country spreading a psychosis of fear and terror….”

Under the brunt of such onslaught, India’s institutions and instruments of democratic governance—Legislative, Judicial and Executive—were running in panic. Though caused by an autocratic prime minister, it had the backing of a presidential mandate issued on June 25, 1975: “In exercise of the powers conferred by clause (1) of Article 352 of the Constitution, I, Fakhruddin Ali Ahmed, President of India, by this Proclamation declare that a grave emergency exists whereby the security of India is threatened by internal disturbances.”

This time around, there is no such proclamation, yet institutions are running in panic. Parliament passes harsh laws as Money Bills; Reserve Bank “demonetises” the currency, throwing people on the streets, “voluntary” Aadhaar is being thrust down the throats of everybody through executive diktats and sedition is slapped at the drop of a hat.

But it is the sense of panic prevailing in the Election Commission of India (ECI) that should alarm those who believe in India as a democracy. Article 324 of the constitution vests with the ECI the task of superintendence, direction, control and conduct of elections to the parliament, state legislatures and the offices of President and Vice-President. Elections being the backbone of democracy, ECI becomes its bone marrow.

The panic is reflected in the ECI writing to the Union law ministry, seeking powers to act against those questioning the poll panel’s credibility through “unfounded allegations”. ECI has reportedly sought amendments to the Contempt of Courts Act, 1971, to empower it to punish anyone who is disobedient or discourteous towards its authority. The matter is currently under consideration with the law ministry. Strangely enough, the ECI has cited the example of the Election Commission of Pakistan, which can initiate contempt proceedings against anyone sullying its image. What an icon of democracy ECI has chosen to emulate!

It all started when complaints of tampering of EVMs surfaced during the recent assembly elections in UP, Uttarakand and Punjab. ECI dismissed the allegations as baseless, speculative and wild. To drive home the point, it challenged the political parties to prove that the EVMs are tamperable and set the date as June 3, 2017. This came to be known as EVM “hackathon”.

ECI held the “challenge” with only two small political parties—NCP and the CPI (M)—attending the event. It had got 14 EVMs for use during the challenge but refused to give the access code or share the memory and battery number of the machines. In the event, the much-hyped “challenge” turned out to be a damp squib. 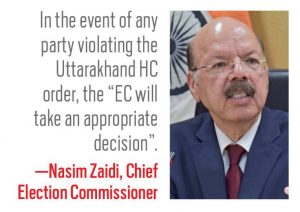 Even then, the ECI had armed itself with a stringent mandamus in favour of EVMs and a gag order against its criticism from the Uttarakhand High Court. This order verbatim was reproduced in the press release issued by the ECI on May 20, soon after the controversy broke out.

Unilaterally certifying that EVMs are not hackable and tamperable, the order went on to say that EVMs use some of the most sophisticated technological features. The judges barred all political parties, individuals, media and even social media networks from criticising the use of EVMs because “it is the duty of the courts to preserve, promote, nurture and maintain the independence of constitutional bodies and to insulate them from unhealthy criticism since otherwise the foundation of democracy would be weakened”.

Chief Election Commissioner Nasim Zaidi claimed a one-sided victory in the non-event and declared that the issue of tamperability “stands closed”. He invoked the Uttarakhand HC order and warned that in the event of any party violating the order, the “EC will take an appropriate decision”. Not content with the protective shield provided by the High Court, the ECI now wants contempt powers for itself!

Be that as it may, the integrity of EVMs has been challenged from the time they were introduced in 1999. It flared up in 2009 soon after the UPA’s victory in the parliamentary elections. The most articulated opposition to EVM came from those aligned to the BJP. The grounds on which EVMs were thrashed were: the whole world has discarded similar EVMs; use of EVM is unconstitutional and illegal; EVM software and hardware are not safe; EVMs are sitting ducks; insider fraud, storing and counting are concerns; ECI is clueless on technology and there is trust deficit.

Dr Subramanian Swamy chipped in and took the matter to the Delhi High Court and then the Supreme Court. The ECI responded with the Voter Verifiable Paper Audit Trail solution which facilitates the voter to physically see the printout of the vote cast by him.

ECI’s core technical argument that EVMs cannot be hacked or tampered because these are stand-alone equipments and not “networked” has been nailed by the German IT expert, Dr Ulrich Weisner, who had taken the EVM case to the German Federal Supreme Court in 2009. According to him, the NEDAP (NV Nederlandsche Apparatenfabriek) voting machines, now banned in the Netherlands, Ireland and Germany, are not networked either. They are similar to the Indian EVMs, and need to be connected to a configuration device before the election, but work stand-alone with no connection to the internet or other networks during the election and the counting phase.

Someone with access to the machines can replace the implanted software with any software, including vote-stealing software and a chess programme. Weisner also counters ECI’s claim of “non-tamperability”, saying that this can only refer to “by-user-operation-via-keys”. But someone who has sufficient access to opening the machines and replacing software or hardware can implant virtually any functionality, including vote-stealing that is only activated under certain circumstances and would not be spotted in tests.

The ECI and our courts are totally obsessed with the technology arguments without any concern for the democracy aspect of elections wherein a vast majority of voters are ordinary citizens without any knowledge or understanding of technology.

Under the paper-ballot system, voters could examine and check the accuracy of the ballot-paper, candidate’s name and symbol and verify whether it has been correctly marked. In case of electoral dispute, physical reconstruction of the vote for authentication is possible. Vote counting was open and transparent.

Under the electronic voting system, all that voters do is to press a button and hear a sound. They have no idea whether the vote has been registered and if so, to which candidate. During counting also, there is no transparency because EVMs are just plugged in and counted on the computers.

The ECI had full control and supervision over the manufacturing of ballot-boxes, printing of ballot papers, their dispatch and counting of votes. But it is not so with EVMs that contain two EEPROMS (Electrically Erasable and Programable Memory) inside the control unit in which the voting data is stored and can be manipulated from an external source.

The manufacturers of EVMs—Bharat Electronics Limited, Bengaluru, and Electronic Corporation of India Limited, Hyderabad—are not under the control or supervision of the ECI. These entities share the confidential software programme with Microchip of the US and Renesas of Japan to copy it on to micro-controllers used in the EVMs. When these foreign companies deliver micro-controllers fused with software code to the EVM manufacturers, neither the manufacturer nor ECI officials can read back their contents because they are locked.

Elections are not an exercise in technology display, but accurate recording of the democratic will of the electorate to their satisfaction. The German Federal Supreme Court acknowledged this by pointing out two major flaws in the EVM. First, these machines did not provide for recording the votes independent of the vote storage module and enabling the respective voter to check his ballot. Second, the essential steps in the ascertainment of results by the voting machines also could not be verified by the public.

On these counts, EVMs fail. Given the shenanigans of EVMs, advanced democracies have abandoned them. By sticking to these machines is Digital India going to be a Digital Democracy? The jury is out!

—The author is a former bureaucrat and arm