The nurse’s case, which gave us various landmark laws, yet again impacts our lives.

Yesterday, the Supreme Court of India revalidated its landmark judgement of 2011. The judgement, which allowed passive euthanasia and which was passed by a two-judge bench, was announced on March 8, ironically International Women’s Day. Equally ironic, though, was the fact that the woman, Aruna Ramchandra Shanbaug, in whose name the public interest litigation was filed in 2009, was denied the same freedom which was being given to everyone else.

In 2014, the new government was asked in the Parliament about passive euthanasia. It quoted the Aruna Shanbaug judgement and said it was fine with it and not in a hurry to bring in a new law. However, an NGO from Delhi went to the Supreme Court and said they had a PIL pending with the court in which they had sought active euthanasia as well as living will.

The new five-judge bench of the Supreme Court has now mostly upheld the validity of the 2011 judgement. It has also allowed advance medical directive (living will) that lets a person decide in advance whether or not to be put on life support in case of terminal illness. (This has already been introduced in the Mental Health Care Act.) So now, a total of seven Supreme Court judges have stood by the passive euthanasia judgement brought by Aruna Shanbaug case.

Aruna Shanbaug came to this city, then called Bombay, fiercely determined to become a nurse. She didn’t know much English, and she had never left her tiny village in Karnataka. But she made Bombay her own. She became a nurse, a very good one at that, and met a doctor. They were to marry. The night before she was to proceed on leave for her wedding, she was brutally sodomised by a sweeper at her very own workplace – a hospital. While sodomising her, he used a dog-chain to strangle her. It cut off the blood supply to her brain and thus began her biggest tragedy – he did not kill her completely, but left her partially brain-stem dead. He took her jewellery and watch and left her in the basement of the hospital to die. She was found the next morning on all fours, exactly the way she had been sodomised. When they touched her, she toppled over. There was blood all over her body, agony in every sinew of her being. And that is how she stayed locked in, from that night in 1973, aged 24, through 2015 when she died, legally.

My mother Roshanara Mody, a teacher and a social worker, told me about Aruna as the world’s most cautionary tale on what can happen to women, and also men, when they are sexually assaulted. I went to see Aruna. I saw her, I never stopped going to see her.

When our country celebrated 50 years of Independence, it occurred to me that she was about the same age. I went to the hospital, dug out her file, found her admission card and got to know her date birth was June 1. Then I wrote an article in the Sunday Times of India. The publisher David Davidar, then with Penguin, called me up and said he wanted a whole book on Aruna’s story. I told him I was not sure about whether I’d be able to write it. What do you say about a woman who lay unseen on a bed in one corner of a hospital, in a city that had changed? All the people she knew had gone, not that it mattered to her. But, all the same, I decided to give it a go.

I traced her village in Karnataka. Then I went to the court – in Bombay — where the case was being heard. I discovered that her rapist was never tried for rape. He walked as a free man for merely stealing her earring and watch. He was tried for attempt to murder because he had not murdered her. I wrote the book and we released it by her bedside on her 50th birthday. I wrote the book in a rage because I could not believe so many injustices could be heaped on that one single, small, bird-like person that she had become.

My residential status changed from Mumbai to Delhi to Bangalore to Pune, but I always made it a point to visit her. All she needed was adult diapers. When she turned 60, something happened to me. I said this woman, who has been in this state since she was 24, is turning 60. Something is horribly wrong with us if we cannot try and set this little bird free.

I approached the Supreme Court in 2009. Every single advocate I got in touch with said no to me. They said there was no way I would win the case. They also said that I was no one to her, not related, and she didn’t even know me. But she didn’t know anybody around her. People would ask me about my locus standi.

Beginning of a long battle

Finally, I met senior advocate Shekhar Naphade, who is also from Mumbai. He was somewhat familiar with her story. He asked me to give him my book and call him after 10 days. When I called him, he wouldn’t take my calls. But I turned into a telephonic stalker. He finally took my call and, in his deep voice, said that he was taking my case and I should see him in Delhi. I took the next flight to Delhi.

He said this case can be thrown out because you are nobody to her. On the other hand, he said, if I was willing to file the case as “her next friend,” which is a constitutional guarantee if there is nobody in the country for someone, he could give it a try. Nobody had tried it before.

The Supreme Court accepted the case after hearing it for two years. I was accompanied by Mr Naphade as my lawyer and his associate Shubhangi Tuli. But the other side came with the might of the State because they were opposing it.

My contention was that there is something called Glasgow Scale, through which I wanted the court to evaluate the level of her consciousness, and if it was established that she was in a Persistent Vegetative State, then let us, according to international protocol, reduce her feed (a narrow tube was inserted via her nose into her stomach) and increase her medication and to let her go peacefully. It would take about 18 to 20 days to let her go. That’s all that I had asked for, but it was vehemently opposed.

I wasn’t allowed to talk to the media, as Mr Naphade was not fine with me doing that in an ongoing case. But, because of this, there were many other people talking unnecessary things, making it about everything except Aruna, including even religion.

In the 2011 judgement, the Supreme Court had also held that attempt to suicide should be decriminalised, which, too, has been brought via the Mental Health Care Act. In the Criminal law amendment of 2013, which was brought into effect post the Nirbhaya case, the words “before, after or even in the process of trying to sexually assault, if you put a woman in a persistent vegetative state, you will be tried for murder” have been added owing to the Aruna Shanbaug case.

So, from one Aruna Shanbaug case, the world’s worst case of sexual harassment, we have got so many laws – passive euthanasia, living will, decriminalising of suicide and a strengthened rape law. Aruna Shanbaug lives on. – As told to Sunil Baghel 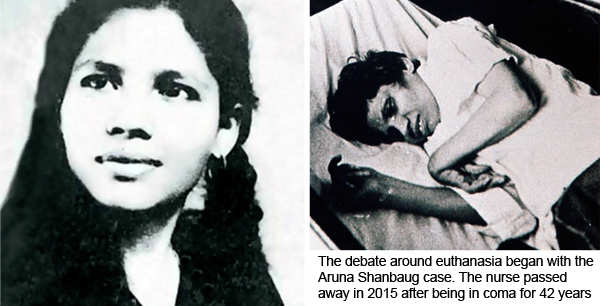 # When the doctor, treating a terminally-ill person with no hope of recovery, would be informed about advanced directive, the medical practitioner shall ascertain the directive’s genuineness and authenticity from jurisdictional judicial magistrate before acting upon the same.

# The patient will be given a go-ahead to discontinue treatment only after the doctor treating him/her is fully convinced that the executor is terminally ill and is undergoing prolonged treatment or is surviving on life support and that the illness of the executor is incurable or there is no hope of him/her being cured.

# If the doctor is convinced that instructions given in the document need to be acted upon, he/she shall inform the executor or the patient’s guardian or close relative about the nature of illness, availability of medical care and consequences of alternative forms of treatment.

# Hospital where such patient has been admitted shall constitute a medical board consisting of the head of treating department and at least three experts from the fields of general medicine, cardiology, neurology, nephrology, psychiatry or oncology with experience in critical care and having experience of at least 20 years.

# The members of the board would visit the patient in the presence of his/her guardian or close relative and form an opinion whether to certify withdrawal or refusal of further medical treatment. This decision shall be regarded as a preliminary opinion.

# After the board certifies that advanced directive be carried out, the hospital shall forthwith inform about it to the jurisdictional collector who would then set up another medical board to look into it.

# The chairman of the board nominated by the collector shall convey its decision to the judicial magistrate before giving effect to the decision to withdraw medical treatment to the patient.

# The magistrate shall visit the patient at the earliest and after examining all the aspects, authorise implementation of the decision of the board.

# If the medical board refuses to grant nod, it would be open to the executor of the advance directive or his family members, the doctor or hospital staff to approach the high court and the Chief Justice shall set up a division bench to decide it expeditiously after affording opportunity to the state.

# The high court will be free to constitute an independent committee consisting of three doctors from the fields of general medicine, cardiology, neurology, nephrology, psychiatry or oncology with experience in critical care and with overall standing in the medical profession of at least 20 years.

# In cases where there is no advance directive about terminally-ill patients, the doctor treating him/her may inform the hospital which, in turn, shall constitute a medical board.