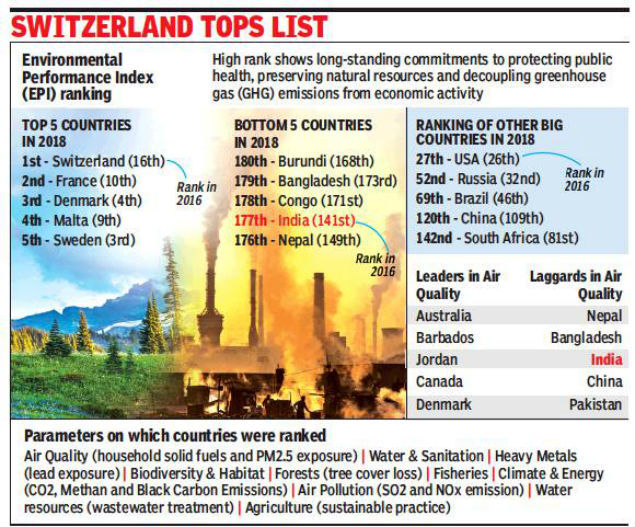 Air quality (household solid fuels and PM2.5 exposure), however, remained the leading environmental threat to public health and the report noted that the countries such as India, China and Pakistan which scored badly on air quality front “face public health crisis that demand urgent attention”.

On this front, India’s ‘Ujjwala Yojana’ – meant for LPG connections to women from Below Poverty Line (BPL) households – got a special mention in the report which noted that if the goal of this scheme is realised, it has potential to positively impact the lives of millions of BPL households by providing them with access to safe, affordable cooking technologies and fuels.

The biennial report, brought out by the Yale and Columbia Universities in collaboration with the WEF, noted that the low ranking of the emerging economic like India and China (120th) reflects the strain population pressure and economic growth impose on environment.

The report at the same time also cited Brazil (rank 69th), suggesting that a concerted focus on sustainability as a “policy priority” will pay dividends.

“Low scores on EPI are indicative of the need for national sustainability efforts on a number of fronts, especially cleaning up air quality, protecting biodiversity and reducing GHG emissions”, said the report which is the 10th version of the EPI ranking.

Though the report noted that the some of the laggards (mainly African countries) face broader challenges such as civil unrest, the low scores in many other countries can be attributed to weak governance.

The US ranked 27th in the 2018 EPI, with strong scores on issues, such as sanitation and air quality. But, the country’s weak performance on issues such as deforestation and GHG emissions, puts it behind other rich nations like France (2), the United Kingdom (6), Germany (13), Italy (16), Japan (20), and Canada (25).

The report claimed that the data for the latest EPI ranking came from international organisations (like World Bank and the UN Food and Agriculture Organisation), research institutions (such as Institute for Health Metrics and Evaluation and the World Resources Institute), academia and government agencies and the sources used variety of techniques, including remote sensing data collected and analysed by research partners.

Referring to countries performance on ‘climate (mitigation) & energy” front, the report noted some positive results but emphasised that efforts need to be accelerated to meet the ambitious targets of the 2015 Paris Climate Agreement — the deal meant which calls for multiple actions to cut GHG emissions so that average temperature rise globally is kept below 2 degree celsius till the end of this century from pre-industrial level (1850).