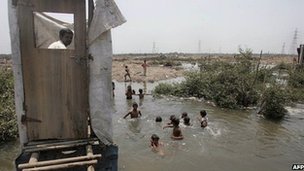 Most of the cases of rape of women and girls in India’s Bihar state occur when they go out to defecate in the open, police and social activists say.

Some 85% of the rural households in the state, one of India’s poorest, have no access to a toilet, a study says.

The police reported more than 870 cases of rape in Bihar last year.

More than half-a-billion Indians lack access to basic sanitation. Many do not have access to flush toilets or other latrines.

The issue of sexual violence against women and girls in India has been under intense scrutiny since the gang rape and murder of a student on a Delhi bus in December led to widespread protests.

In March, India passed a new bill containing harsher punishments, including the death penalty, for rapists.

There have been a number of recent cases where women and girls have been raped in Bihar after they stepped out of their homes to defecate:

Senior police official Arvind Pandey told the BBC that such cases happen every month in Bihar.

“They take place when women step out to defecate early in the morning and late evening. It is a very worrisome trend.”

Mr Pandey said that about 400 women would have “escaped” rape last year if they had toilets in their homes.

A recent study by global health organisation Population Service International (PSI) and Monitor Delloitte, done in collaboration with Water for People, said that Bihar had India’s poorest sanitation indicators with 85% rural households having no access to toilets.

The report added that 49% of the households that did not have a toilet wanted one for “safety and security”.

Some 45% wanted a toilet for “convenience”, while 4% wanted one for “privacy”.

“Surprisingly, only 1% indicated health as a motivator for having a toilet,” the report said.

The Bihar government says it plans to provide toilets to more than 10 million households in the state by 2022 under a federal scheme.

A law making toilets mandatory has been introduced in several states as part of the “sanitation for all” drive by the Indian government.

Special funds are made available for people to construct toilets to promote hygiene and eradicate the practice of faeces collection – or scavenging – which is mainly carried out by low-caste people.