India – BJP is testing the limits of #censorship 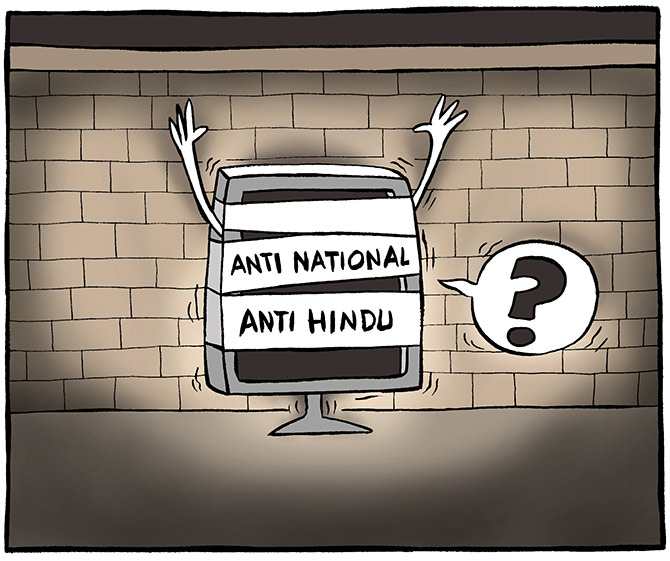 ‘There is perhaps a need to pay heed to L K Advani’s belief about an Emergency re-run,’ says Amulya Ganguli.
Illustration: Uttam Ghosh/Rediff.com

The blacking out of a television channel for a day can be regarded as the Narendra Modi government’s first step towards imposing its writ on the nation in a more comprehensive manner.

The dark screen will also be reminder to the people about the government’s inherent power to do as it pleases.

The explanation for its decision is the customary one. Ever since the government and the BJP took upon themselves the onerous task of determining what is good for the country, they have been intervening in various spheres of the nation’s life to ensure that no one transgresses the limits set by the guardians of national interest in the corridors of power, chosen by 31 per cent of the popular vote.

These interventions can include dictating what people can say and eat — the critics of Modi and beef-eaters can leave the country, said the two BJP ministers, Giriraj Singh and Mukhar Abbas Naqvi.

Or thrashing a student on the suspicion of being a seditionist by lawyers sympathetic towards the BJP in the premises of a court while the police, led by Union Home Minister Rajnath Singh’s favourite commissioner, B S Bassi, looked on benignly.

Or the ‘disappearance’ of a student after becoming involved in a fracas with the Akhil Bharatiya Vidyarthi Parishad, a saffron student organisation.

Or the suicide of a student after the vice-chancellor of the university where he studied is badgered by the Union human resource development ministry to ascertain why the campus had become a ‘den’ of Left extremists.

Or the expression of regret by a saffron godman that the law doesn’t allow him to behead those refusing to say ‘Bharat Mata ki Jai.’

All these acts are the result of the government’s and the BJP’s conviction that those who do not agree to the saffron viewpoint are anti-nationals.

Since these dubious individuals use the media to disseminate their unpatriotic views, the Hindutva camp first dubbed newsmen as ‘presstitutes’ and has now taken the next logical step of silencing some of them, for a day to start with.

If the government can get away with gagging a television channel, it can consider further measures in line with what Union Minister of State for Home Kiren Rijuju said about the ‘habit of raising doubts questioning the authorities and the police,’ which, according to him, is not ‘a good culture.’

The antipathy of the government and the BJP towards the media cannot be unrelated to Modi’s personal aversion in the aftermath of the Gujarat riots which saw the ‘modern day Nero,’ to quote the Supreme Court, at the receiving end of adverse criticism for a prolonged period.

Not surprisingly, the prime minister has never held a wide-ranging press conference where nearly all the media houses are represented. All that he has conceded is to give interviews to ‘friendly’ journalists. And these, too, have been few and far between.

Meanwhile, the term ‘presstitutes’ has been gleefully picked up by the saffron camp’s cyber warriors, who also freely use the term, anti-Hindu, to describe dissenters.

For instance, one of them has said that ‘while most of the mainstream media has become cautious (after Modi’s victory), there are many magazines and Web sites which are solely devoted to churning out anti-Hindu material.’

The word, anti-national, has been added to the tag, anti-Hindu, to justify the latest ban on a television channel for allegedly breaching national security during the Pathankot operation of the security forces against the terrorists.

Prohibitions of this nature may not become as common as the outlawing of a large number of NGOs on the grounds of their ‘anti-national’ activity. But there is little doubt that the government is testing the limits to which it can go in curbing dissent.

Some of its earlier peremptory acts have not passed muster as, for instance, when the judiciary criticised the government’s decision to prevent a Greenpeace activist from travellng to Britain to speak to the MPs there on environmental issues.

The court said the activist’s interaction with British lawmakers ‘cannot be construed as an anti-national activity.’

Although nearly all the representative organisations of the media like the Editors Guild, the Press Club and others have described the ban on the television channel as being reminiscent of the Emergency, Information and Broadcasting Minister Venkaiah Naidu thinks that the move is ‘broadly’ supported by the people.

The claim recalls then Congress president Dev Kanta Borooah’s belief during the Emergency that ‘Indira is India.’

There is perhaps a need to pay heed to L K Advani’s belief about an Emergency re-run which he expressed last year.