Political Advertising in the Pradhan Mantri Bharatiya Janaushadhi Pariyojana?
The PMBJP logo is a more blatant political advertising than naming a scheme after a former prime minister.
NEW DELHI: Public health activists have criticised the government for using the Jan Aushadhi scheme to “advertise” the name of the Bharatiya Janata Party. All medicines being sold through this scheme across the country carry a logo that highlights the Hindi letters “Bha”, “Ja” and “Pa” in saffron in the scheme’s acronym (see image).

Not only all medicines, even the website of the scheme carries this official logo. “A scheme run using government funds is being used to advertise the name of a particular party,” said Dr Amit Sengupta of Jan Swasthya Abhiyan. “This is nothing but surrogate advertising for BJP with public money”. 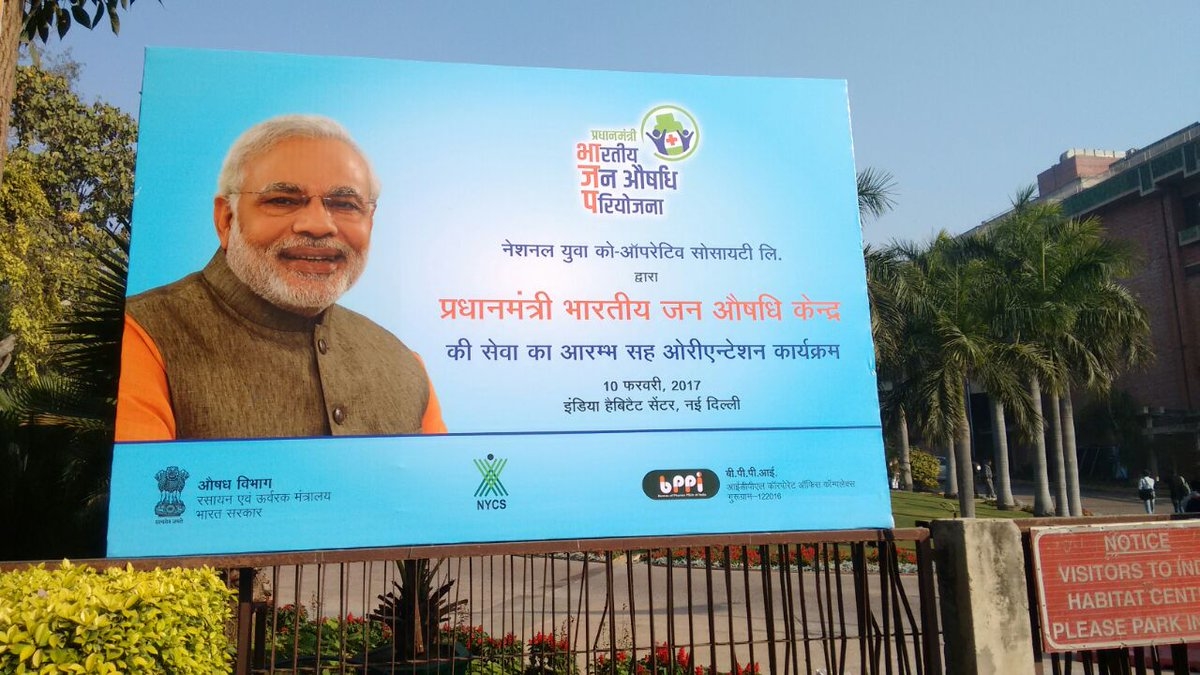 “It looks like the name of the scheme has been intentionally altered to make it PMBJP. Renaming it to add ‘Bhartiya’ otherwise just doesn’t make any sense,” said Chhaya Pachauli of Prayas, an organisation working on public health in Rajasthan. Attempts to get a response from the government on the charges being made by the activists proved futile.

The scheme is being implemented through the Bureau of Pharma PSUs of India, under the Department of Pharmaceuticals. According to the scheme’s official website, as on March 15, 2018, 3,200-plus Janaushadhi stores were functional offering more than 700 drugs and 154 surgicals & consumables. However, reports from the ground suggest problems of availability of drugs at these stores.

The ‘Jan Aushadhi’ scheme launched in 2008 by the UPA government to sell low-cost generic medicines was re-branded twice by the Modi government in the last three years. Now the advertising and marketing of the flagship programme for the poor has taken a complete saffron and BJP hue — literally.

The saffron-hued logo of the scheme — with Bha Ja Pa in Devanagari, also the short form for the Bharatiya Janata Party (BJP) in Hindi — stands out starkly.

It can be seen on the website of the rebranded Pradhan Mantri Bhartiya Janaushadhi Pariyojana (PMBJP) and packaging of the medicines sold at special outlets under the flagship programme of the Ministry of Chemicals and Fertilizers.

Earlier the packages carried the logo of the medicine manufacture — Bureau of Pharma PSUs of India (BPPI) established in December 2008.

“The packaging till last few months was not like this. Now it includes Bha Ja Pa in saffron colour,” said a store owner selling generic medicines under the Pradhan Mantri Bhartiya Jan Aushadhi Pariyojana (PMBJP).

Earlier, when the name of the scheme was changed, its packaging remained the same. However, medicines sold under the scheme at specialised outlets come in new packages that has saffron writ large on its logo.

IANS visited some PMBJP stores in Delhi and NCR to check packages of the medicines manufactured in 2016, 2017 and 2018.

Those manufactured before January 2018 had the original logo of the scheme with only ‘Jan Aushadhi — Quality Medicines at Affordable Prices for All’ written on the packs.

But the medicines manufactured after January 2018 have the new logo and colour on their packages.

The scheme was launched to make quality medicine accessible to all at an affordable price.

The medicines are available at a ‘Jan Aushadhi Medical Store’, whose name has also changed to Pradhan Mantri Bhartiya Janaushadhi Kendra with a photo of Modi and the new logo.