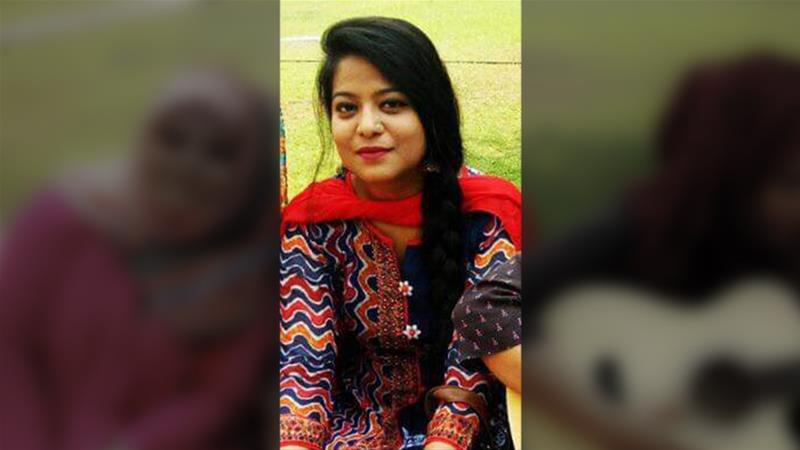 Zargar was associated with the Jamia Coordination Committee, which organised weeks of peaceful protests in the capital against a citizenship law passed last December [courtesy of Zargar's family]

Safoora Zargar who was behind anti-CAA protests stands accused of being a key ‘conspirator’ in the February Delhi riots.by Valay Singh26 Apr 2020

The 27-year old, in the second trimester of her first pregnancy, was arrested on April 10 and subsequently charged under the stringent anti-terror law, the Unlawful Activities Prevention Act, 2019 (UAPA), by the Delhi police.

Zargar was associated with the Jamia Coordination Committee (JCC), which organised weeks of peaceful protests in the capital against a citizenship law passed last December.

Police accuse Zargar of being a key “conspirator” in the February violence that erupted in northeast Delhi after supporters of the Hindu nationalist government attacked peaceful sit-ins. At least 53 people were killed, mostly Muslims, in the worst violence in the capital since the 1984 anti-Sikh riots.

“She was the strongest women voice in the JCC but, she wasn’t there to just be in the spotlight unlike some others”, said Kausar Jan, an art student, who along with others had painted protest art on the walls of the university.

Speaking to Al Jazeera, one of Zargar’s teachers described her as “outspoken and hard working”. “I really hope that the judiciary will consider her academic record and her medical condition and release her soon,” she said, requesting to remain anonymous.

A member of the JCC, who also wished to remain anonymous, said the arrests amid the coronavirus pandemic were to ensure that the anti-CAA movement died a slow death, even after the lockdown is lifted.

On February 10, Zargar had fainted after being caught in a scuffle between the police and students, and had to be hospitalised briefly.

“Since then, with her advancing pregnancy a concern, she had gradually restricted her physical movement. And after the outbreak of COVID-19 she had virtually stopped stepping out of the house except for essential work. She was mostly working from home,” her husband, who requested his name not be used, told Al Jazeera.

The Tihar prison complex in New Delhi is one of India’s most overcrowded prisons with nearly double the number of inmates than it can accommodate.

The COVID-19 outbreak has led to Indian courts ordering the release of those who have not been to trial but Zargar, charged with as many as 18 crimes including rioting, possession of arms, attempt to murder, incitement of violence, sedition, murder, and promoting enmity between different groups on grounds of religion, is not eligible for an early release.

“In fact, we had secured bail in the Jaffrabad case where she had been accused of leading women and children to protest and disrupt traffic,” her lawyer, who also withheld his name, said.

But, before she could be released, police arrested her in another case. They refused to disclose what the exact charges were against her, or even the material which formed the basis for her arrest.

It was after the court ordered that charges and material be disclosed that the police invoked UAPA against Zargar.

“Incarcerating her despite her pregnancy on the basis of vague charges is a grave miscarriage of justice,” her lawyer said.

Al Jazeera called Delhi Police PRO MS Randhawa, who referred to a statement issued by the police last week. On April 20, the police tweeted that all arrests in relation to the Delhi riots were in compliance with the law and based on scientific evidence, warning that “it will not be deterred by false propaganda and rumours…”.

Justice in time of pandemic

Concerns are being raised about limited access to justice during the coronavirus pandemic. Visits to prisons by lawyers and families have been banned.

After several days, the court allowed Zargar’s lawyer to speak to her over the phone.

“I am aghast to learn that in the name of quarantine, Safoora [Zargar] is being kept in solitary confinement! Can you imagine the psychological toll this will take on her? She told me that she had made five applications to speak telephonically to her husband but was denied each time by citing COVID-19 protocols,” the lawyer said. The lawyer is worried that Zargar is suffering from medical and dietary negligence.

UAPA is often characterised by activists as ‘the process which is the punishment’. It allows police up to six months to file charges against the accused – as against three months under regular criminal law. Using it against an ordinary student such as Zargar has raised serious concerns about the Delhi police’s impartiality.

“This case shows that diminished access to justice during the lockdown is being used to implicate and imprison student activists who led the peaceful anti-CAA protests,” said Vrinda Grover, a Supreme Court advocate.

“Given her pregnant condition she is at high risk and having been sent to jail by a court order, the court is fully responsible that as an undertrial, her health is in no way harmed in judicial custody,” Grover said.

Zargar’s family marked the first day of Ramadan with sadness and anxiety.

“It would have been a very joyful occasion given that we are expecting our first child. All we did was pray for her safety and quick release. In her condition she needs care, not jail,” her husband told Al Jazeera.