India – Chittisinghpura Sikh Massacre: 18 years ago, It was a BJP Government 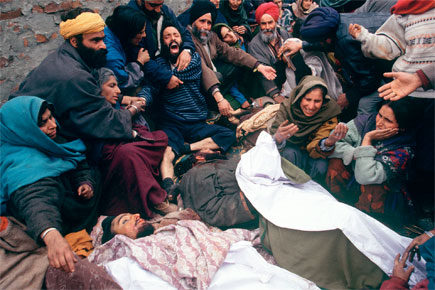 Our wounds are legion. Yet, in the face of evil, we continue to stand tall and firm and undaunted.

This week marks exactly 18 years since the tragic day when Sikhs around the world woke up to yet another brutal massacre of innocent members of the community. 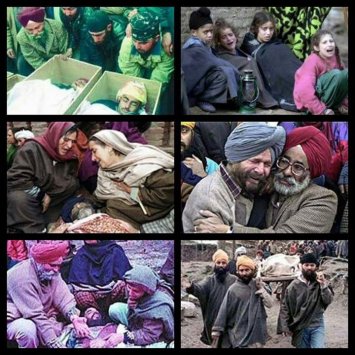 It was on 20 March, 2000 that 36 Sikh men and children were killed execution style in cold blood at Chitti Singhpora (”Chitthi” – literally, ‘letter’ or ’missive’ in Punjabi). [The town is also referred to as ‘Chattisinghpora‘.]

I was then living in Kashmir and was in the village on the day after the massacre.

The Sikhs in this sparsely populated area of south Kashmir have been living here since their forefathers settled in Kashmir during the Khalsa Raj of Maharaja Ranjit Singh. Mostly, the villagers were farmers with small land holdings. A few of their members were in government service. In all, it was not an affluent community.

On that cold rainy evening which was also the day Holi is celebrated all over India, people were herded out from their houses by masked armed gunmen and made to line up before being sprayed with automatic gunfire. Even children were not spared: one of the dead was a young boy aged 9 who was killed along with his father.

The day for the massacre had not been chosen at random by the murderers. The then President of United States, Bill Clinton, was in India on an official visit. Amidst worldwide condemnation of the incident, the finger of suspicion was, as intended by the perpetrators of the crime, automatically raised towards Pakistan.

Since 1989 an armed insurgent movement against the Indian administration had erupted in Kashmir. It was no secret that Pakistan had been overtly and covertly supporting the armed groups fighting for a free Kashmir. During the early days of the insurgency about half a million Kashmiri Brahmin Hindus left the valley and migrated to other parts of the country.

The minuscule Sikh community living in the valley decided against leaving their home and hearth and even during the worst bloodshed in the valley there was hardly any incident against the community. In fact the Sikhs and Muslims of Kashmir have always had a cordial coexistence.

This incident shook the faith of Sikhs around the world in the Kashmiri Muslim community. The militants were blamed of ethnic cleansing and wanting to erase any sign of a plural society in Kashmir.

Back in the United States, it was the powerful lobby and community members of the Sikh intelligentsia which rose up against the killings. They petitioned world leaders against this dastardly act and meetings with senators and congressmen in Washington became everyday news. Pakistan was badly cornered although almost all the militant organizations operating in Kashmir swore that they had no hand in this massacre.

While the killing left behind scores of broken families, widows and orphans, the Indian government was secretly rejoicing a major diplomatic coup. Indians noted jubilantly that even President Clinton, who had during his inaugural speech on January 20, 1993 mentioned the freedom struggle of Kashmir and equated it with Bosnia, had now been forced to ‘rethink’ his stance.

Bill Clinton condemned this incident while in Delhi and without naming Pakistan warned of stern action against the killings.

While the Indian media and the government immediately labelled it a terrorist hit against an unarmed ethnic minority, the facts started coming out within a few days.

There was an Indian army camp near Chitti Singhpora and the villagers knew quite a few of the army men since they patrolled the area frequently. On that fateful day many people from the village had seen the army men playing holi and applying colours to each other in their camp.

When the villagers were asked to assemble at two places in the village, eyewitnesses remember that they saw a few partially masked faces of the gunmen with “holi” colours on them and even recognized the voice of one “Subedar” (Corporal) who used to man a checkpoint near the village almost daily.

The gunmen appeared to be intoxicated and even offered drinks to the victims before shooting them. They even knew the names of the ones they wanted to, and did shoot — they had called out a few of the men by name.

After the massacre, they left behind a few bottles of alcohol which clearly bore  distinct Indian Defence Service markings.

The question is: what would the militants and Pakistan have gained by killing innocent Sikh villagers at a time when the aspirations of Kashmiri Muslims was being discussed at diplomatic levels? The status of Kashmir as a disputed territory between India and Pakistan was suddenly getting recognition by the international community.

Even Syed Salahudin, the chief of the dreaded Hizb Ul Mujahideen group, swore that no Kashmiri or foreign militant was involved in the killings.

Five days after the massacre, on March 25, India’s Home Minister L.K. Advani claimed that its security forces had killed all the five Lashkar-e-­Taiyeba terrorists involved in the Chitti Singhpora massacre. He identified them as “foreign mercenaries” in the Indian parliament.

The place of this encounter was about 50 miles from Chitti Singhpora. Within days of this new incident, it was reported in the Indian media that all of the five thus killed were daily waging laborers from a remote village of Anantnag who were rounded up by an Indian army contingent led by one Colonel Bajaj and summarily executed.

After a public outcry, the bodies which had been buried in the forests by the army, were exhumed and the identity of each of the five was proven.

Surprisingly, the Indian army later denied that these people who had been by them were in any way involved in the Chitti Singhpora massacre!

There was no doubt any more that this second massacre too was stage-managed by the Indian Army, as was the earlier Chitti Singhpora massacre.

Till today, the army and police officials involved in these massacres have not been punished.

A few months before the Chitti Singhpora carnage, on 24 December, 1999, the ruling BJP in India — it was then in power at the centre in India — had to face ignominy and public flak when they released seven top terrorist leaders including Maulana Masud Azhar in exchange for the hijacked Indian Airlines 814 in Kandhar, Afghanistan.

First, Pakistan was immediately castigated internationally as a terrorist state and isolated on the international forum.

Secondly, the BJP government of that time was successful in deflecting the public criticism for their surrender before the terrorists, thus laying the entire blame on ISI, the Pakistani intelligence agency.

Between these diplomatic coups and conspiracies of the highest order, the Sikh community of Chitti Singhpora was scarred for life. Till this day, there has been no justice for them in a country which they call their own.