Waste generation in India each year (in tonnes)

Did you know? While Maharashtra tops the list of states with highest solid waste generation per day (26,820 tonnes), Delhi records the largest per capita waste generation every day (501.4 g) 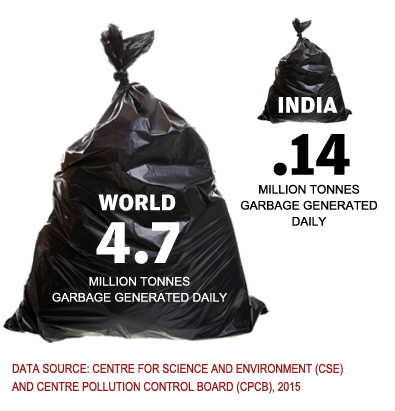 Did you know? Each year, around 10 million tonnes of garbage is generated in metropolitan cities such as Delhi, Mumbai, Chennai, Hyderabad, Bengaluru and Kolkata. Out of the total municipal waste collected, 94 per cent is dumped on land and only five per cent is composted.

Did you know? In India, around 3 million trucks worth of garbage is untreated and disposed of by municipal authorities everyday in an unhygienic manner

✎  move mouse over the bars to know detail☛  Data source: Not in my Backyard, CSE, 2016

Only 68 per cent of the garbage generated in the country is collected, of which 28 per cent is treated by the municipal authorities. Thus, the poor collection and treatment of waste leads to dumped garbage on streets clearly showing up the poor and inefficient system available to tackle waste management in urban areas. The total waste generation is projected to be 165 million tonnes by 2031 and 436 million tonnes by 2050, according to the Ministry of Environment, Forest and Climate Change.

Did you know? By 2025, 1.4 billion people will be living in cities and each inhabitant of every city will generate around 1.42 kg of trash a day

Compared to those in developed nations, residents in developing countries, especially the urban poor, are more severely impacted by unsustainably managed waste. In low and middle-income countries, waste is often disposed in unregulated dumps or openly burned. These practices create serious health, safety, and environmental consequences. Poorly managed waste serves as a breeding ground for disease vectors, contributes to global climate change through methane generation, and even promotes urban violence.

In the Sunita Narain’s words, “We know that we have a serious garbage problem. But the problem is not about finding the right technology for waste disposal. The problem is how to integrate the technology with a system of household-level segregation so that waste does not end up in landfills, but is processed and reused.”
Data source:

✿   Not in my Backyard, CSE, 2016
✿  Swachhta Status Report 2016, NSSO
✿   Assessment and quantification of plastics waste generation in major cities, 2015, CPCB
✿  Report of the Task Force on Waste to Energy (Volume I), In the context of Integrated MSW Management,
Planning Commission, 2014
✿  What a Waste : A Global Review of Solid Waste Management, World Bank