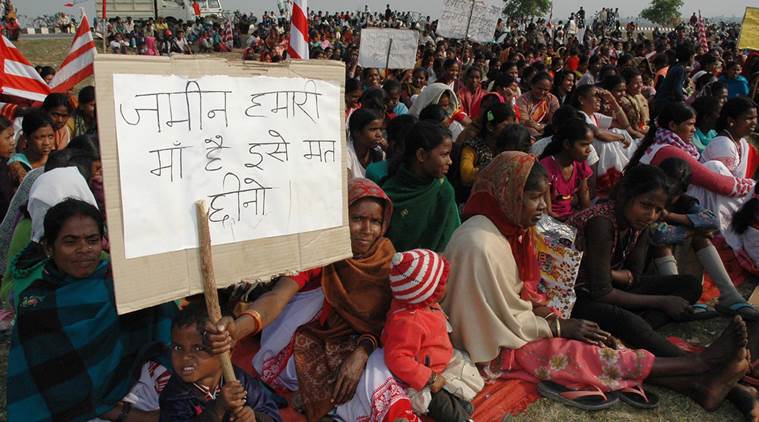 The National Alliance of People’s Movements (NAPM) unequivocally condemns the recent series of killings of Adivasis by the CRPF and C-60 elite anti-Naxal force of the Indian State in the name of ‘encounters’ at Gadchiroli (Maharashtra) and Bijapur (Chhattisgarh). Various news reports have revealed that at least 39 people, including 19 women were killed on 22nd – 23rd, April at Gadchiroli and 8 people, including 6 women were killed on 27th April at Bijapur. Some of those killed and/or have gone missing are, reportedly minors.

Barely a month ago, Telangana’s elite anti-Naxal force Greyhounds gunned down 10 suspected Maoists, including 6 women. Estimates point that in the past four months alone, the toll of alleged Maoist killings has risen to 108. Killings of this scale, which should have shocked and shaken the ‘collective conscience’ of this nation, unfortunately, does not even make evoke the necessary outrage, what with the State ever-ready to package these as deaths as necessary, rather inevitable, for safeguarding ‘national interests’!

Numerous civil liberties groups have already raised disturbing questions about the circumstances of these ‘encounters’, the unilateral nature of the attack and deaths, the ‘unpreparedness’ of the ‘maoists’ who had reportedly camped nearby for a wedding party, disproportionality of the use of force with Under Barrel Grenade Launchers (UBGL) bound to cause excessive causalities, more bodies fished out vis-à-vis arms recovered. Followed by the ruthlessness and scale of the attack, what left us dumbfounded was the ‘celebration’ of these killings by certain jawans!

Encounter killings both in the ‘maoist-infested’ regions as well as in certain other states have crept into the state policy in an unannounced way and are being brutally employed to shut down dissenting voices and people. Uttar Pradesh shines brightly on this front with over 1,000 encounter killings to its credit in the past one year!

While encounter killings in the Adivasi-populated, geopolitical terrain of the Central and Eastern India have a different and larger context in some ways, it is important to also note that at least since 2014, concerned of the increasing number of such unaccounted and unaccountable encounters, the Supreme Court laid down elaborate guidelines to be followed while inquiring into encounter deaths and directed that these guidelines shall serve as law of the land under Article 141 of the Constitution.

This set of 16 guidelines includes recording of ‘tip-off’ of any criminal activity, registration of FIR and prompt forwarding of FIR, diary entries, panchnamas, sketch, etc. to the competent court, independent investigation by CID or a police officer above the rank of officer leading the team that indulged in encounter, magisterial inquiry under Sec 176 Cr.P.C, furnishing all information to NHRC / SHRC, expeditions trial, six-monthly report by DGPs of all states to NHRC on encounter killings / police firings, compensation to family of deceased; legal, medical services as required, disciplinary action against concerned officers, refraining from glorification and grant of gallantry awards without establishment of facts, option for family to approach sessions judge in case of questions about the impartiality of inquiry. However, one finds that in a large number of instances, meticulous compliance with even these minimum guidelines is not ensured.

What is worrisome for any democratic, peace-loving citizen of this country is that these heavily forested areas inhabited by countless Adivasi communities come under the protected Schedule V status of the Constitution. These areas are supposed to be administered and governed by Governors of these regions along with consultation by Tribal Advisory Committees constituted with three-fourth members from Scheduled Tribes. The Governors are directly answerable to the President of India regarding the political situation of these areas

. However, what we have been witnessing is an absolute police-raj and paramilitary-raj in these areas in the name of ‘eliminating naxalism’, backed by state-impunity, at the behest of corporate interests. India’s anti-insurgency and anti-terrorism laws like Section 121 of IPC and UAPA are implemented with a heavy hand whereas talk, let alone implementation, of Schedule V, Panchayats (Extension to Scheduled Areas) Act, 1996; Forest Rights Act, 2006; Scheduled Castes and Scheduled Tribes (Prevention of Atrocities Act), 1989 is nowhere to be seen in government parlance or policy of these adivasis areas.

Recently, numerous Adivasi villages of Jharkhand and Chhattisgarh erected stone memorials with the Schedule 5 tenets inscribed on them to assert their special status as enshrined in the Indian Constitution. These assertions were suppressed again by heavy police action and made infamous as the Pathalgadi incident by jingoistic media.  What makes it doubly disturbing is that these forests are homes to Adivasis rich in mineral reserves, forest produce, endangered species of flora and fauna and have been the favorite target of neo-liberal multinational corporations. Adivasi communities living in these areas since centuries have already faced the brunt of colonial oppression and forest mafia and continue to live on the margins, fighting an unequal battle against predatory onslaughts on their autonomy and survival. Various fact-finding missions have time and again established that many Adivasi men and even women are routinely picked up, detained, arrested for months-on, tortured, without legal aid. Adivasi women and at times even young boys are subject to worse forms of sexual violence and rapes.  In the specific context of Gadchiroli, the mass ‘encounter’ also needs to be seen as a counter-strategy by the State to delegitimize the mass uprising by Adivasis against mining by companies in the Surjagarh Hill area.

It is indeed unfortunate that the Indian government is choosing to establish the Rule of Law in these areas only through brute force and not by active political and social intervention. This mindset also reflects the bias and prejudice through which the ‘adivasi’ subject has been viewed historically. Equally condemnable is the violence, jailing, fabricated cases on democratic activists who are asserting the legal and human rights of Adivasis in the region. One is not unmindful of or condoning the violence by Maoists in previous instances such as Sukma, Burkapal, Chintalnar etc. leading to casualties of many jawans. However, the ‘welfare State’, as it claims to be, has an ethical and constitutional duty and is also more privileged in terms of the impunity and enormous power it enjoys to reach out for a meaningful and lasting political dialogue for peace in the region.

We condemn tactics by the state-police-corporate nexus of branding all Adivasi resistance as ‘Left Wing Extremism’ in order to use brute force as seen in the case of Niyamgiri. The very survival of our democracy depends on our environmental and ecological heritage along with participation by Adivasi cultures that have inhabited these natural reserves in harmony and sustenance for centuries.. No amount of war and neo-liberal scramble for natural resources will guarantee our survival in the future where more than profits we need clean air, water, food and life of dignity for all communities. Only by allowing autonomy in Adivasi areas through Gram Sabhas as enshrined by the Constitution can be a way towards peace in these areas.

We demand that the directives issued by the Apex Court in PUCL vs the State of Maharashtra be fully implemented in all cases of ‘encounter-killings’ including in the recent Gadchiroli and Bijapur ‘encounters’. Given the scale and circumstances of these killings, a high-level, independent judicial probe is warranted.

We call upon the Indian government to fundamentally reflect upon its policy of military suppression of Adivasis and Adivasi resistance in the forests of Central and Eastern India and reach out with a meaningful political dialogue, stopping all forms of violence, including searches, raids, arrest, rapes, and harassment of Adivasis and activists.

We urge Governors of the states of Jharkhand, Maharashtra, Chhattisgarh, Orissa, Telangana and Andhra Pradesh to live to up to their constitutional mandate and intervene in territories that are under their care and supervision in consultation with Tribal Advisory Committees and the President of India and ensure full implementation of all legislation that safeguard interests of adivasis.

We appeal to the National Human Rights Commission to take immediate notice of the relentless state repression on Adivasis and prevent human rights abuses by security forces in Schedule V areas.

Rohith Vemula’s Death A Noose around the Bharatiya Janata Party’s Neck
If women’s safety is all about owning a handgun, what about the rapist who lurks at home?
To operate or not to operate: A serious question with no clear answers #healthcare
Press release - In solidarity with Tamil Novelist Joe D'Cruz #FOE