#India – Cultural Activist Hem Mishra has no links with Naxalites 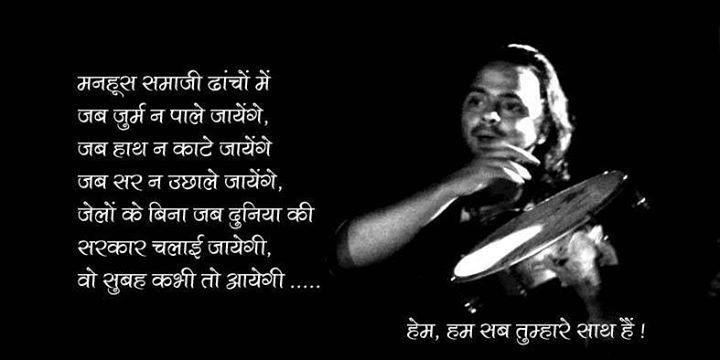 ‘My son has no links with Naxalites‘

NAGPUR: Keshavdutt, father of Hem Mishra, the student of New Delhi‘s Jawaharlal NehruUniversity (JNU) who was arrested for allegedly being courier for Naxalites, has alleged thatGadchiroli police had framed his son in false cases.

Keshavdutt, a retired teacher, claimed Hem was actually picked up from Ballarshah in Chandrapur and not Aheri in Gadchiroli as the police claimed. “False charges were framed against my son as is routinely done by police in Naxalite areas by planting materials on his person. My son is a meritorious student and was never an outlaw as police are projecting him,” he said. Keshavdutt, who spoke to TOI from Almora in Uttarakhand, stated his only knowledge regarding Naxaliteswas what he had gathered from media.

He said that the family was in touch with Hem till August 20 when his mobile phone was suddenly switched off. “We learnt about his arrest and charges from Hem’s contacts in Delhi,” he said. “I spoke to SP Gadchiroli (Mohd Suvez Haque) on phone. The senior officer was telling me about all sorts of charges he framed against Hem which I believe were not true,” the distressed father said.

Police had claimed that Hem was arrested along with Pandu Narote and Mahesh Teerki from Morewada in Aheri Taluka on August 22. The trio, remanded for 10 days in police custody, has been arrested for its alleged connection to top Naxalite cadre and divisional committee member Narmada Akka. Police said Hem was carrying a microchip having details about Naxalite activities in urban centres. A letter and some cash were also found in possession of Hem who, police claimed, was likely to meet Narmada.

Keshavdutt also claimed his son had a congenital problem in his left hand and he was heading to Dr Prakash Amte‘s hospital. “Hem had earlier visited Chennai for treatment and had been visiting elsewhere in the country during vacations. He had already undergone surgery on his hand but was not relieved,” he said. Dr Amte said he was unaware of any development as his Lok Biradari Project Hospital at Hemalkasa in Gadchiroli had been cut-off from rest of the district due to heavy rains. “Am yet to know of any arrest,” he said.

Keshavdutt said his son had an inclination towards culture and stated that he would request son’s party colleagues to ensure legal help for him. “My son wanted to get a job as soon as possible. He was working hard towards it,” he said. The father also called Hem a helpful soul. “Hopefully cops are not torturing him for anything,” he said.

#Aadhaar made mandatory to prevent black marketers from purchasing onion #WTFnews
The Scars of a Riot
FIR Registered By women Of Nendra village, Bijapur, Against Security Forces For Gang Rape And Loot #...
Gujarat - AGAIN- 2 Dalits Thrashed For Refusing To Clear Cow Carcass