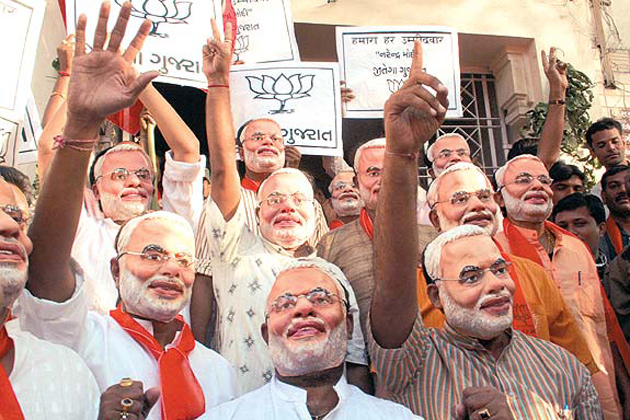 A FRENZY OF COUNTING

In the lead up to the 2014 general elections, India seems consumed by a frenzy of counting. How much is the annual growth rate? What is the extent of poverty? How much debt is the country facing? How much has inflation grown? What is the value of the rupee, and how much further did it plummet of late? How will vote-share change between the various political parties? How many percentage points did the popularity of this leader increase and of that one fall? The discourses of economic development and electoral democracy are becoming completely saturated with statistics. Recently, economists Amartya Sen and Jean Drèze on the one hand, and Jagdish Bhagwati and Arvind Panagariya on the other, have dominated the front pages of newspapers with their mutually opposed economic and political diagnoses and prescriptions. The CSDS-Lokniti Election Tracker survey, conducted across states over many months, puts charts and graphs in the headlines and on television channels.

Accompanied by interpretation and commentary, the numbers do help us to get a sense of the escalating crisis in our economy, and also provide a warning that a regime change at the Centre, with the Bharatiya Janata Party coming back to power, is not unlikely next year. In this way, counts and calculations of all types are an important component of the political conversation. The numbers paint a picture, give us yet another means to understand the complex and contradictory events in which we are immersed. This much is both common to many democracies and also desirable, in that citizens of a free country ought to have access to information that directly affects their everyday reality, presented in as clear a form as possible.

The trouble begins, though, when the counting spills out of discussions about development and elections into other areas of discourse, and this is a problem that is directly attributable to the new entrant in national politics, Narendra Modi. His political style entails a language of measurement applied in areas of our collective life where it is not just inappropriate — it is immoral.

We are slowly becoming exposed to a political language in which violence, too, falls within the purview of measurement. In this hitherto-unfamiliar atmosphere, violence is measured in the following ways: it is either denied altogether (nothing criminal and culpable happened to Muslims in Gujarat 2002: the damage to the minority community there amounts to zero); or it is cancelled out relative to other violence (the number of the dead in Delhi in 1984 cancels out and justifies the number of the dead in Gujarat in 2002); or it is compared and contrasted in terms of lives lost and harm done, but only to be used as a weapon of blame against others (fatalities in riots and pogroms under Congress or Left administrations in some states provide a justification for fatalities under BJP administrations elsewhere; the “action” of X number of Hindu killings in Godhra explains — and exonerates -— the “reaction” of Y number of Muslim killings in Ahmedabad, where Y is many times X). In this calculus, books are balanced in such a way as to allow Modi to state repeatedly that he cannot apologize or express remorse for what happened under his watch as Gujarat’s chief minister, because he has never been proven, personally, to be “guilty”.

Dead Sikhs, dead Muslims, dead Kashmiris, dead Maoists, dead Dalits, dead tribals — how many were there, and how many make up for the dead Hindus at the end of any given episode of state-sponsored or quasi-spontaneous, sectarian strife? The PR machine of Modi, his coterie of supportive journalists and intellectuals, his sometimes self-appointed and other times carefully hand-picked spokespersons in print and broadcast media, social media, and academic institutions, busily go about measuring violence, counting the dead, dividing and diminishing communities, and decimating the foundations of tolerance, civility and a basic respect for human life and fundamental rights that underpin our democracy.

The claim is that more of “us” died than “them”. Or maybe in absolute numbers fewer of “us” died, but the value of one of “us” is always more than the value of one of “them”, so even if more of “them” died, “we” suffered more. “We” are more in sheer numbers — since “we” are the majority — so it follows that “we” are more than equal in terms of our value to society, who counts and who is worth what. If critics of Modi bring up 2002, an episode of protracted violence that overwhelmingly targeted Muslims, his defenders scurry to bring out their ledgers and balance-sheets, eager to prove, first, that on the whole no harm was done and, second, that nobody except them knows how to calculate the true costs and casualties of communalism.

In his short and very important tract, Fear of Small Numbers: An Essay on the Geography of Anger (2006), the cultural anthropologist, Arjun Appadurai, elucidates how majoritarianism works, through the “anxiety of incompleteness” and “predatory identities”. In any diverse society, the majority is not the whole: it is continually plagued by the anxiety that what constitutes the difference between itself and the entirety of the nation is precisely the small non-majority: the minority. (There could be multiple, even smaller minorities, of course, but let us set aside that scenario for the sake of simplicity of argument and look at the picture only in terms of a majority and a single minority).

If the minority were eliminated, the majority would be one with the totality, it would become the nation itself, purified and homogeneous. The minority, howsoever small its number, keeps the majority from constituting a complete, undivided and undifferentiated national community. The anxiety generated by this incompleteness of the majority leads that majority to become predatory upon the minority, seeking to close the gap between itself and the nation. The minority, even though it might be numerically no match for the majority, is seen as a source of threat, and a kind of anticipatory revenge is visited upon it in order to get rid of it altogether.

The state of Gujarat under Modi’s rule — not just in early 2002, but throughout the three terms of his administration since 2001 — exemplifies this fear of small numbers. Through mass violence, through a systematic denial of justice, through the failure to rehabilitate and compensate victims of the 2002 pogrom, through lopsided economic policies, through the hijacking of state institutions as well as through all of the cultural, symbolic and rhetorical resources at the disposal of Hindutva ideology and its vehicle, the sangh parivar, Gujarat’s Muslims under Modi have been reduced to second-class citizens.

It is not just that their votes do not count. The fact is that the community itself no longer adds up to so much as a blip on Modi’s development agenda, never mind on his conscience. But all the number-crunching in the world is not going to be able to conceal their pathetic socio-economic condition, the erosion of their political status, and the repudiation of their human rights that Modi has comprehensively achieved in the past decade or more — a situation that he unapologetically promises to extend to all Muslims across India should he become prime minister next year.

There should be no uncertainty or doubt about the real manifesto for the 2014 elections: Narendra Modi intends to bring to a final conclusion the incomplete realization of the two-nation theory and the incomplete project of Partition. If he cannot physically remove 175 million Muslims from the Hindu rashtra, he can do the next-best thing, which is to ensure that they simply do not count.