#India – Do women in Parliament make a difference to other women? #Womenrights #Sundayreading 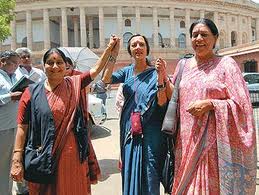 Do women holding formal political power make a difference to other women? In other words do they represent women? and in any case what does representation mean in a highly stratified society like India where the class and caste divide is greater than the gender divide ?

The news that three of India’s women chief ministers Mamata Banerjee, Jayalalitha and Mayawati (now ex chief minister) -had opted out of joining the “fronts ” and coalitions that are emerging prior to the Lok Sabha elections–  and that each was aspiring as the newspapers put it “to reach Delhi” as a Prime Minister, has interesting meaning. This group of three, often called MAJAMA, have some very special characteristics. These women are not only single women, they are not part of the family dynasty syndrome- wives/widows/ daughter-in-laws. Sheila Dixit, daughter in law of a very senior Congress leader Uma Shankar Dixit. Sonia of the Nehru-Gandhi Dynasty, Meira Kumar, daughter of Babu Jagjivan Ram, a powerful Dalit leader and not to forget Rabridevi standing in for Lalu Yadav. This trend is also present in the Panchayat elections.

And these three women ruled some of the largest states with a total population of over 363 million which is around 30% of the Indian population. They are powerful women and political heavy weights and aspire to be even heavier. They are sometimes mocked at by male chauvinists for being bachelor girls and somewhat idiosyncratic, which is often used as a frailty or a characteristic of women by such men. There is also the additional snipe that they were partners of powerful men though Mamata does not fall into this bracket.

Unlike the caste or minority vote banks, women are not a vote bank for themselves. Their collective and individual votes are merged into the voting patterns attached to other lobbies or interests – not only caste and religion but also farm, tribal and so on. Given this situation how will reservation of seats, bring in representation?

An interesting analysis has been made by the senior journalist Neerja Chowdhury of this issue of representation. Not only does she argue that the women in power do not represent women but she suggests that women in political spaces whether it is parties or legislatures hesitate to be seen as being associated with women’s movement as they think they will be marginalized. Further the perception of power is to be in charge of what are called the significant ministries such as industry, power, telecommunication, foreign affairs, finance etc. The Ministry which represents women is considered to be soft; hence the association with women’s cause is soft as compared to other expertise.

With the Lok Sabha elections round the corner, and a sense of disappointment within the feminist movements, that the reservation bill that has been pending for several decades, could not pass through the last of the UPA’s parliaments – it is important to raise the question whether it makes a difference to women to have women in legislatures and positions of power. What brings power seems to be another track rather than “representation.”

The underlying assumption with the Women’s Reservation Bill is that women as policymakers are more sensitive to women-related issues. This has generated  interesting research on whether women’s reservation has had any impact on the allocation of resources towards women, apart from dealt with other domains such as economic inclusion, enlargement of economic rights , restraint on sexual and other sources of violence.

An article entitled “India’s missing women,”  Mudit Kapoor and Shamika Ravi published on 10th February , (drawn from a longer paper entitled “Why so few women in Politics? Evidence from India”)  could not have been more perfect in timing and in the message it holds. Apart from showing the limitations of the women’s reservation bill, in stimulating “the upliftment of women “, an important observation in the context of current preoccupation with the forthcoming General elections, and “women’s demands”, it shows the abysmal absence of women amongst the electorate, the decline matching the decline in the population. “As a percentage of the female electorate, missing women have gone up significantly — from 13 per cent to approximately 20 per cent. Hence, fewer female voters will voice their opinions through elections. Political decisions which are based on election outcomes therefore underrepresent the female population. The worsening sex ratio of the Indian electorate has deep and long lasting consequences given the democratic system of governance. Within a democracy, politicians compete to get elected and though it is well recognised that men and women differ in their policy preferences, the adverse sex ratio of the electorate will make it unlikely that the preferences of women get significant attention.”, they say.

They also highlight in their article how even though a politician may not be biased against women and women related policies, due to the electoral competition of our democratic system, she is compelled to choose policies in favour of the average electorate which is increasingly male-dominated in India.

The mandated participation of women in Panchayats has opened gates for debates and research on whether the elected women have made a difference to the women in their constituencies . Do they represent women and their voice and capabilities ?  An NCAER Working Paper by Deininger et al (2012) concludes that political reservation for women in India has an empowerment effect on women in terms of lesser hours  of house work for women (compensated by more hours by men). It also increases the extent to which women assert reproductive choices and control their own resources. A significant increase in girls educational attainment was found hinting that women sarpanchs tend to spend more on education. Esther Duflo’s (2004) randomized controlled trial study in West Bengal and Rajasthan has indicated that when women are leading local government, the choices or priorities seem towards health, education and social services, in comparison with male led Panchayat institutions. These studies, therefore, show that women are more altruistic but they fail to show that women leaders raise women’s issues. For example, there seems to be no evidence of inverse relation between women leadership and incidence of violence against women. Also, even if we have women to women representation, will it find the sub location? What about caste and minority issues?

For this one needs to do voter education, enable women voters, especially from the masses, the “last woman” who in fact is the majority, to discuss her ideas on what she wishes to gain from the political institutions. According to the Election Commission of India, the number of first time voters in the age-group 18-19 is 23.16 million. It also shows that the voter registration is only 45.87% of the 50.47 million youth falling in this age group. So, more than one in two voters of 18-19 years are not registered to vote. Within these young voters according to the Ravi & Kapoor ratio there would be some 40 – 50 % women voters.

It is valuable to recall, that one of the first efforts of extraordinary Indian women leaders, such as Kamaladevi Chattopadhyay was to engage with educating women, not only to vote ,but what it is all about.

We need  strong voice for women’s concerns and issues, in powerful democratic spaces.. we need women politicians who are “feminist” . We need political formal power , though we have informal power due to the vibrant feminist movement .  It is necessary -and possible given the wide spread activism of the feminist movements in India, -to mobilize support for women candidates who represent women, whose lobby and sources of power are women voters- imitative of vote banks for other social groups.

While it may be possible to suggest that the last woman’s needs could be taken note of. It is her choices, her ideas that come out of her collectivities that need to becomes a block vote , – shifting the politics of economics , of institutions , of law .

This is  the task before the energetic Indian women’s movements, despite missing women, -even amongst voters as has been pointed out, -if those who are there , can get women who are their spokespersons elected, it would be more enabling than the reservation of seats for women .

Women holding positions of power in India today does prove to be a role model and an interesting point of departure, but their mere presence does not naturally lead to a transformed society. Women will have to be actively represented , through organized voice at all levels of political structure for a real change where women’s issues are everybody issues.