India – Do you know Jinnah defended Tilak in a sedition case ? 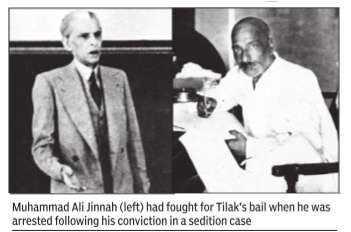 .That too is part of our history, says historian Irfan Habib

Prof Irfan Habib.
Irfan Habib was present when Muhammad Ali Jinnah came to Aligarh Muslim University and his portrait was installed in the students’ union hall over seven decades ago. The noted historian talks to Manimugdha S Sharma about the row, the politics of rowdyism, and allowing a private player to adopt Red Fort. Exerpts:
As a boy, you saw Jinnah when he came to AMU in a carriage pulled by the students. Could you tell us more about his visits to the campus?
Jinnah came twice to AMU. The first time, in 1938, he came with my father in his car. My father, Prof Mohammad Habib, was with the Congress and Jinnah then had the reputation of being a national leader. The Lahore Resolution (seeking Pakistan in 1940) had not come by then. The second time he came was around 1943 — I forget the exact date — when Muslim League had a very strong presence and influence here. That’s when the students had brought him from the station in a carriage they pulled.

Do you think the row over the Jinnah portrait is just an extension of the nationalist-style politics being practised these days?
It’s not nationalism. It is communal chauvinism. There were two aspects to Jinnah: one was Partition and the other was opposition to British rule from the time of Gopalkrishna Gokhale. Very few people know that he was the defence counsel of Bal Gangadhar Tilak (in a sedition case) and won him the case against the British government in 1916. It’s a part of our history. Even if somebody wants to be rowdy about it, history can’t be changed. In fact, Bhagat Singh should be a national hero for Pakistan as much as he is for us.

Right-wing groups also keep flogging Sir Syed Ahmed Khan, founder of AMU, every now and then as the “founder of Pakistan”…
They are not even right-wing groups, they are hooligan groups. Those people who behaved like that in Kathua (the gang-rape and murder of an eight-year-old) were not right-wingers. They were just hooligans and criminals.

Right-wing groups have also been blaming Jawaharlal Nehru for Partition. Now Jinnah is back in the crosshairs. Do you think this is deliberate?
Yes, but it surprises me that the press never asks what Modi’s ideological ancestors like M S Golwalkar did for the nation except divide it. Golwalkar said Muslims can’t be citizens of this country. He praised Hitler for suppressing the Jews. Modi may go to Israel but Golwalkar is on record praising Hitler’s treatment of Jews. These things were never brought out by the media while covering Modi’s visit to Israel.

Are we mirroring Pakistan now?
In his speech on August 11, 1947 (to Pakistan’s Constituent Assembly), Jinnah had said that Pakistan would be the same for all citizens whether they are Sikhs, Christians, Hindus or Muslims. There will be no discrimination. But then they made a Constitution that said it will be according to Islamic law. They had all kinds of Islamic laws until they reached the present position where any person could be hauled up and killed for blasphemy. Once religion begins to take hold and becomes an instrument of electoral politics, there is no end to it.

What are your views on corporate groups adopting monuments such as Red Fort? They are talking about holding concerts there.
What will the proposed interpretation centre interpret? They will probably interpret what the visitors would want to be told, even if it is a fake history of Red Fort. What experience does Dalmia Bharat have in monument management?

You had objected to the Aga Khan Trust for Culture working on Humayun’s Tomb too.

Aga Khan Foundation messed up the monument. They never gave the chemical formulae of the materials they replaced the originals with. They had no Persian-knowing historian of importance with them, no study of Persian sources, etc. They spoilt the monument in one way, and these people might do so in another way.

What about the other side that favours giving private groups a chance?

I think there is a legislation called Ancient Monuments Preservation Act 1904 that was re-legislated in 1958. We need to stick to that. And as far as these things are concerned, tomorrow they might say that they will privatise the police. Monument management is as important for a nation as policing.

We are in the bicentenary year of Karl Marx. Do you think he is still relevant?

People are relevant even after they’re gone. Plato and Aristotle are still relevant. So is Marx in many of his economic analyses. Whatever be the politics, the point is, any ideology that doesn’t think of humanity as a whole has little right to be heard. If it is confined only to one country, one community, one kind of people, then it is hardly an ideology worth following. And that also goes for the Hindutva types, Muslim communalism and the Trump type of Christianity.

US Multinational - Dow Chemical to be summoned in Bhopal Disaster Criminal Case #Goodnews
India - 'We have become guinea pigs for biometrics’ #Aadhaar
Attn Chennai- Culture Unplugged A Justice Rocks Concert
Kasganj: The Facts And Not The Hype