India – “Doctor For Beggars” Treats His Patients On Pune Streets, 6 Days A Week

Dr Abhijit Sonawane believes he has two families now — one at home and the other on streets.

PUNE:  The homeless and beggars in Pune have one thing less to worry about — medical care. They get free medicines, weekly check-ups and necessary treatment on the streets. And if they need special care or even surgeries, they are taken to hospitals and all the expenses are taken care of by a doctor.

Dr Abhijit Sonawane has been looking after these people who beg to survive or have been abandoned by their families. He has been doing it for years as he feels responsible towards them, he says.

Dr Sonawane’s day starts early. He can be seen wearing an apron with “Doctor for Beggar” written on the back. He carries his clinic on his motorcycle. It has medicines and basic medical equipment. By 10 am, he is outside a religious place doing his rounds and mingling with the crowd. He listens to their problems, runs basic tests and when necessary admits critical patients to hospitals. He is usually around till 3 pm from Monday to Saturday.

Even as beggars are everywhere in the city, Dr Sonawane goes to temples, mosques and other religious places to meet them. Since a lot of disabled and elderly people assemble outside temples, mosques and churches on special days of the week, he has drawn a roster and visits these places according to their turn. The Soham Trust has identified these religious spots base on the high density of beggars.

So one can find him sitting with his patients outside Lord Shiva temple on Monday, Devi temple on Tuesday, Ganpati temple on Wednesday, Sai Baba temple on Thursday, a mosque on Friday and Saturday is reserved for Maruti temple. 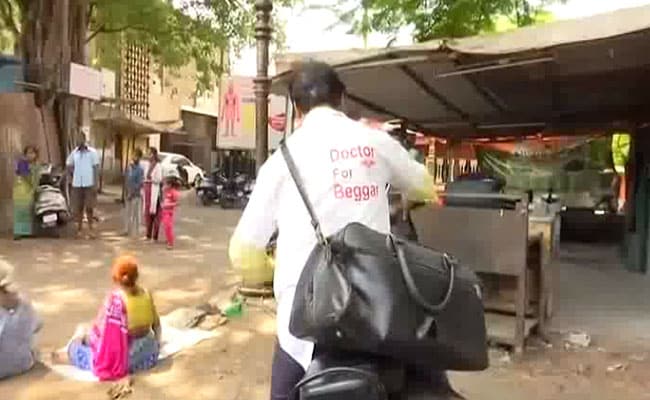 Dr Sonawane roams around Pune on a motorbike which is his clinic.

“We have established a connection. They know me and I know them. I believe I have two families now — one at home and the other on streets. So I have to look after them. I help them as a doctor, but my aim is to convince them to quit begging and do some work. Whenever I can, I offer them money through my trust so that they can create a better life for themselves,” Dr Sonawane said.

Several years ago, when Dr Sonawane became a medical practitioner, he treated patients in a village. “I didn’t have any money. I wasn’t employed at any hospital. So I knocked on doors and asked them if they had any sick person at home. I was soon losing my sense of purpose. I was going off track, and then I met a beggar family who helped me find an aim. Later, when I became financial stable, I thought of helping beggars so that they too find an aim in life,” he told news agency ANI.

He is hailed as “godsend” by his patients, who feel grateful for his services.
But Dr Sonawane wants to do more for them. “I urge everybody to treat these people as human beings and not to give them money as that way they are making them dependent on them. They should instead help them find work,” he said.

(With inputs from ANI)