India – Don’t misread Supreme Court order, #Aadhaar not a must

The DoT is wrongly asking subscribers to link their mobile numbers to Aadhaar in order to keep them active.
Under no situation can the ministry of communications establish that the two-judge bench’s order will prevail over the five-judge Constitution Bench’s order, says Gopal Krishna. 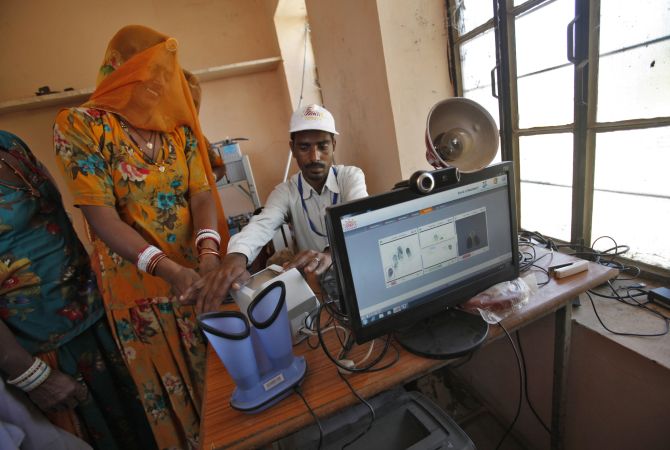 A recent newspaper report misrepresented an observation made by the Supreme Court in an order by a two-judge bench (external link) delivered on February 6.

The report appeared to be a part of the barrage of messages sent to mobile subscribers, asking them to mandatorily link their Aadhaar to their phone numbers to keep the latter active, as per the Government of India’s directions.

However, while referring to the government order, the reporter failed to examine the consistency of the letter (external link) from the department of telecommunications with the law and an October 15, 2015 order (external link) by the Supreme Court’s five-judge Constitution Bench.

The DoT issued the letter on March 23, 2017, with the subject ‘Implementation of Hon’ble Supreme Court orders regarding 100% E-KYC based re-verification of all existing subscribers’, wherein it partially refers to the observation made by the two-judge bench in the February order.

The observation of the two-judge bench which the DoT letter referred to is in para 5 of the order.

It reads: ‘In view of the factual position brought to our notice during the course of hearing, we are satisfied that the prayers made in the writ petition have been substantially dealt with, and an effective process has been evolved to ensure identity verification, as well as, the addresses of all mobile phone subscribers for new subscribers.’

‘In the near future, and more particularly, within one year from today, a similar verification will be completed, in the case of existing subscribers.’

After citing this part of the court’s order, the letter would have us believe that ‘this amounts to a direction which is to be completed within a time frame of one year’.

The fact is that the DoT has drawn a flawed inference with regard to whether or not the Supreme Court observation ‘amounts to a direction’ or not because under no situation can the ministry of communications establish that the two-judge bench’s order will prevail over the five-judge Constitution Bench’s order.

After the June 9, 2017 verdict (external link) of the Supreme Court bench, headed by Justice A K Sikri, on the 12-digit biometric Aadhaar, DoT’s letter has become invalid on three grounds.

One, the letter is illegal as it is in violation of the five-judge bench order.

Two, the letter is inconsistent with the Aadhaar Act, 2016 (external link), and three, the Supreme Court’s order of June 9, 2017 will prevail over the DoT letter dated March 23.

Notably, nowhere does the Aadhaar (Targeted Delivery of Financial and Other Subsidies, Benefits and Services) Act, 2016 provide for and authorise ‘seeding’ of UID/Aadhaar numbers in databases.

The Act provides for only two uses:

1. Authentication, which means that biometric or demographic data can be sent to the Unique Identification Authority of India’s Central Identities Data Repository to return a ‘yes/no’ reply to the question whether you are who you say you are; and,

2. eKYC, which does something they had said they would never do — give the data on their database (except core biometric data — although they have no means to stop any agency from collecting and keeping biometrics when it is given for authentication) to an authorised service agency.

It is germane to note that Section 8(2)(b) of the Act is categorical in stating that an agency requesting authentication ‘ensure(s) that the identity information of an individual is only used for submission’ to the CIDR of 12-digit biometric UID/Aadhaar numbers ‘for authentication’.

It does not authorise anyone to hold onto the number.

As per the order of the five-judge bench of the Supreme Court dated October 15, 2015, Aadhaar cannot be made mandatory for the purposes of linking to mobile phones.

The use of Aadhaar for linking to other databases, retention, storage or publishing is prohibited and is a punishable offence under the the Aadhaar Act 2016.

Apart from the foregoing, the following should be noted clearly:

1. Aadhaar cannot be made compulsory because of the orders of the Supreme Court.

3. The CIDR of Aadhaar numbers is not a verified or audited database. Neither the UIDAI nor any other government authority certifies it as a proof of identity, address, resident status or even the existence of any person.

4. The linkage of Aadhaar to mobiles will encourage imposters to obtain SIMs.

5. In its counter-affidavit in the Supreme Court in the Lokniti Foundation v Union of Indiacase, the Centre, through the then attorney general, stated that ‘currently Aadhaar card or biometric authentication is not mandatory for obtaining a new telephone connection’.

The proper wording of the submission of the attorney general and the Supreme Court’s order are important in light of the misreporting of the case. (The headline of the above mentioned news report, for instance, was ‘SC asks Centre to link all mobile numbers to Aadhaar within one year’.)

In its petition, the Lokniti Foundation, had prayed that ‘the Aadhar card or such other biometric identification may be made compulsory for verification of the mobile phone subscribers that can ensure 100 per cent verification of mobile phones’, but pursuant to the attorney general’s submission, the two-judge bench of the court decided not to purposefully violate the orders of a three-judge bench and the five-judge Constitution Bench, which assert that getting a biometric Aadhaar number is voluntary.

But the DoT chose to misinterpret the order.

6. It is germane to note that the August 11, 2015, order of a three-judge bench of Justices Chelameswar, S A Bobde and Nagappan observed, ‘The Union of India shall give wide publicity in the electronic and print media including radio and television networks that it is not mandatory for a citizen to obtain an Aadhaar card; The production of an Aadhaar card will not be condition for obtaining any benefits otherwise due to a citizen’.

7. The order passed by the five-judge Constitution Bench in the ‘UID/Aadhaar’ matter, reads: ‘We impress upon the Union of India that it shall strictly follow all the earlier orders passed by this court commencing from September 23, 2013. We will also make it clear that the Aadhaar card scheme is purely voluntary and it cannot be made mandatory till the matter is finally decided by this court one way or the other’.

8. This ‘Aadhaar is voluntary’ position has been repeated by the high courts of Kerala, Jammu and Kashmir, Karnataka and Andhra Pradesh.

9. In a significant case, a Punjab and Haryana high court bench, headed by then Chief Justice A K Sikri (currently a Supreme Court judge), heard a matter challenging a circular making Aadhaar mandatory.

The moment the court raised questions of laws, the circular making Aadhaar mandatory was withdrawn by the central government.

10. It must be noted that in keeping with court’s order, the West Bengal assembly passed a unanimous resolution against Aadhaar number-related schemes in the public interest.

11. In a related case, the Unique Identification Authority of India (UIDAI) vs Central Bureau of Investigation (CBI), the apex court passed an order dated March 24, 2014, which reads as follows:

‘More so, no person shall be deprived of any service for want of Aadhaar number in case he/she is otherwise eligible/entitled.’

‘All the authorities are directed to modify their forms/circulars/likes so as to not compulsorily require the Aadhaar number.’

This order in the case is a part of the ‘all the earlier orders passed by this court’ which is required to be followed ‘strictly’.

It is quite evident that repeated orders issued by the Supreme Court till June 27, 2017, make it clear that Aadhaar remains voluntary.

Therefore, no one can be mandatorily asked to produce or link biometric Aadhaar for anything.

12. The then attorney general had admitted in an affidavit filed on behalf of the Centre that Aadhaar is not mandatory.

14. A three judge-bench headed by the then Chief Justice of India on January 5, 2017, expressed concern about the collection of biometric data by private and foreign agencies.

It must be noted that the existing legal provisions as per the Supreme Court’s order and the Aadhaar Act, 2016 do not provide for seeding of Aadhaar with any scheme or project.

16. The views of the National Human Rights Commission reveal that the biometric authentication scheme has a number of dangerous ramifications.

The National Human Rights Commission’s view on the ‘need for protection of information’, ‘the possibility of tampering with stored biometric information’ and ‘disclosure of information in the interest of national security’ has been ignored.

It is evident that following the attorney general’s submission in the Supreme Court recorded in the February 6, 2017, order stating that UID/Aadhaar is not mandatory for telephone connections and keeping the orders of several high courts and apex court in mind, there is a logical legal obligation for the government and non-governmental agencies who are implementing UID/Aadhaar-related schemes and systems to revise their orders and circulars to comply with the court’s order in letter and spirit.

In the aftermath of the verdict of the nine-judge Constitution Bench declaring the Right to Privacy as a Fundamental Right, it is high time editors chastened their reporters to refrain from irresponsible and untruthful reporting.