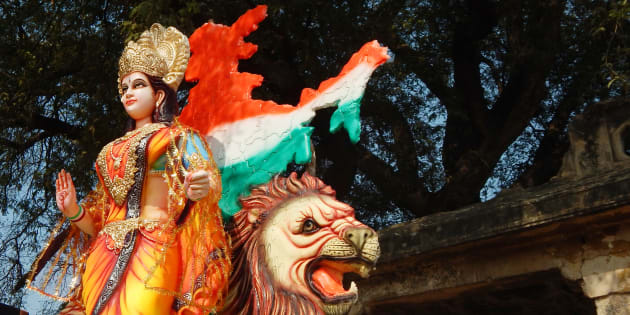 The courtroom is not a television studio.

That’s what a judge had to tell a government lawyer in court. Kashmiri separatist Shabbir Shah is on trial in a money-laundering case. He has been arrested by the Enforcement Directorate after a hawala operator said most of the money seized from him came from Shah.

Enforcement Directorate lawyer Rajeev Awasthi said Shah was using the money to fund terror and challenged him to chant “Bharat Mata ki jai” to prove his patriotism in court.

That brought about the admonishment from the judge, Sidharth Sharma.

“This is not a TV studio. If you want to say these things, you should sit in a TV studio,” he told him.

The problem is in the eyes of too many of us, everything is a TV studio. We do not live our lives so much as perform it. The daily shouting and mudslinging matches on our television have surely had some impact on our psyche. We watch them not to learn what happened in the news but to see the news enacted as soap opera. And if all the world’s a television studio, why should we not be players playing many parts? Why should courtrooms be immune from this kind of high-octane made-for-TV courtroom drama? And the more we can distill these issues into tweet-sized litmus tests the more audience-friendly the drama.

This is perfect for short-attention span television where you are either a patriot or a deshdrohi, and everything is black and white with no nuance allowed.

But this is also what happens when we spend too much time doing Facebook quizzes to find out what Bengali fictional character we most resemble or what (God help us) politician most resonates with us.

Life becomes a Facebook quiz. So it’s hardly surprising we find ourselves living out what seems like a Facebook quiz version of “What kind of patriot are you?”

In this quiz faith in the Constitution is not as important as slogans, songs and dietary choices.

What happened in the court was Shah’s lawyer said his client had “complete faith in Indian law and the Constitution.” Awasthi told The Telegraph that made him emotional and he drew on his “craft and skills as a lawyer” to challenge that supposed faith.

But he did not ask him to recite anything from the Constitution or name our fundamental rights as proof of that faith. He wanted him to chant a slogan because he was really testing a different kind of faith. Obviously this was tapping into the old debate about whether chanting Bharat Mata ki Jai goes against the Islamic idea of worshipping only one God. As a result Bharat Mata ki Jai has been seized on as a convenient way to identity the other. It can lend itself easily to television debates and hashtags. Best of all it’s ostensibly not about religion at all. It’s about that most sacrosanct of emotions – patriotism. But it can function as Shoaib Daniyal writes in Scroll as a code word for a theocratic Hindu state. But that’s a different debate.

What’s more at issue here is the fact that we do not debate via argument as much as via Agni pariksha. Even in a court of law, a lawyer wants to prove a point not by laying out facts and figures but by getting someone to chant a slogan. How’s that too different from a vigilante mob demanding someone recite from the Quran or the Hanuman Chalisa to prove their religious affiliations, to determine whether they should expect mercy or punishment?

In a country enamoured of performance patriotism this is only to be expected. And it’s equally unsurprising that those JNU students accused of chanting the wrong kinds of slogans should not only have found themselves hauled into court, but also been beaten up by some lawyers in the courthouse premises. It’s not enough to be punished by law if you have broken it, justice must be administered by mob in the guise of patriotic fervour.

That JNU case and this latest one have something more in common.

Lawyer Rajeev Tadac who was reprimanded by the judge in that case for shouting Vande Mataram and Bharat Mata ki Jai apologised when the judge told him to “maintain some degree of moderation” but like Awasthi told journalists he was not “ashamed” because he was “moved by patriotic feelings”.

Now if we could only be moved by this same patriotic fervour when it comes to keeping our country litter-free or female infanticide-free then we would certainly be a very different Bharat by now.