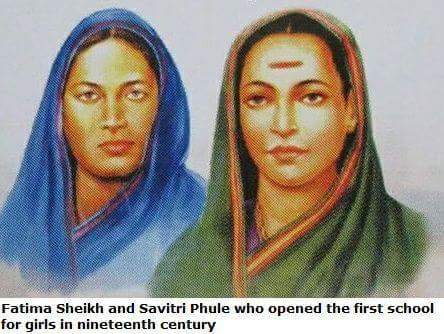 Bhide Wada, where the first school for girls was set up by Savitribai Phule and Fatima Begum, is to be converted into a commercial complex

Pune is a renowned education hub, with its proliferation of educational institutes and universities. There is a constant and growing influx of students who come here for education. But less known and acknowledged is Pune’s vital role in the history of women’s education in India.
Did you know that India’s first school for girls was set up at Bhide Wada, Pune, on January 1, 1848? It was the courageous initiative of Savitribai Phule and her associate, Fatima Begum, who set up the first school for girls in India. The aim was to free girls from social slavery and ignorance. They faced immense opposition and even abuse, but continued steadfast amidst adversity, and continued to run the school.

Savitribai Phule was the wife of the radical social reformer Mahatma Jyotiba Phule. The school was named ‘Bhide School’, after the owner of the property, Tatyarao Bhide. He gave some rooms to Mahatma Phule at his Bhide wada, to start the first school for girls. This school which was functioning for many years, is no longer in existence.

Girls and women have excelled in every field, but we all seem to have a collective memory loss in failing to recognise the historical significance of the first school for girls. It is a shame that such a crucial intervention that laid the foundation of women’s development in India, has been forgotten and no one understands and recognises its value and worth. The efforts of Savitribai Phule and Fatima Begum need to be documented and preserved, and one of the ways would be to make concerted efforts to restore Bhide Wada into a heritage site.

The future of Bhide Wada is now in a state of a stalemate. It was being converted into a residential-cum-commercial building but the combined efforts of a number of people’s organisations opposed it, and they were able to get the court’s stay order. Pratima Pardeshi, Convenor, Bhide Wada Bachao Samiti said that all the ruling parties have supported the demand for declaring Bhide Wada as a heritage site, and build a memorial in respect of it being the first school for girls. The demand has been submitted to the Maharashtra state government, and the samiti is continuously following it up, but all they are receiving are assurances, not decisions. Now the situation is critical, as the building is in a dilapidated state and the whole matter is in limbo.

Thus this historical site and memory is now in the process of being erased not only from our minds, but also from the city space. It is necessary to restore the glorious past of Bhide Wada, as it is a landmark place which has centrally positioned Pune in the history of women’s empowerment.