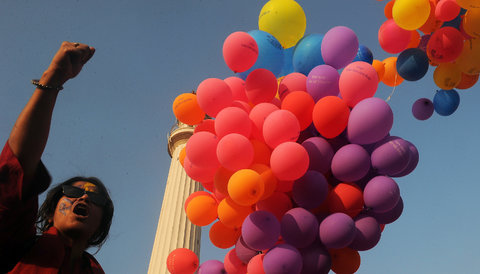 Dibyangshu Sarkar/Agence France-Presse — Getty ImagesA demonstration in Kolkata, West Bengal, on Feb. 14, which was part of the ‘One Billion Rising’ campaign, a global initiative to oppose violence against women.

KOLKATA, West Bengal —In February 2012, a woman was gang-raped in a moving car after she was offered a lift from outside a nightclub on Kolkata’s Park Street. Unlike the majority of rape victims in India, she decided to report the crime, not only to the Park Street police, but also to the media. With her back to the TV cameras, her frizzy hair being her only identifying feature, she fielded questions from journalists.

Not long afterward, as she waited at a bus stop, another person saw her curls and asked, “Are you the Park Street rape victim?”

The woman immediately fled the bus stop. After that, she began to tie up her hair every time she went outside. 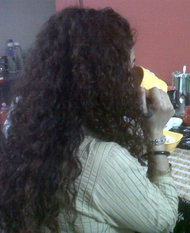 Courtesy of Swati SenguptaKatrina at a reporter’s house in Kolkata, West Bengal, on May 14.

“Even my family and friends now ask me to straighten my hair,” said the woman, a 38-year-old Anglo-Indian who asked to be identified as Katrina. “I am constantly identified everywhere I go. But why should I? I love my curls and always like to keep my hair open.”

Since the gang rape and murder of a 23-year-old student in Delhi last year shocked the nation, the central government has passedstronger laws on sex crimes and harassment of women, and the suspects are being tried in a fast-track court that was set up for sexual assault cases, which usually take years to conclude.

Katrina’s case is also in a fast-track court in Kolkata, where three of the five men she accused of raping her — Nishad Alam, Naseer Khan and Sumit Bajaj – began their trial in March. However, the Kolkata police commissioner, Surajit Kar Purakayastha, said the police are still looking for the other two men, Mohammad Ali and Kader Khan, the main suspect.

However, tougher laws on crimes against women can’t prevent the ostracization that occurs to rape victims in India, as Katrina has learned.

For example, the chief minister of West Bengal, Mamata Banerjee, responded to the initial reports about the rape by saying Katrina had lied in order to make her government look bad. Hours later, an angry mob formed outside Katrina’s apartment building.

Katrina has also been receiving calls from unknown people who have threatened her or offered her money to withdraw the case, the last one as recently as April, which she reported to the police.

The single mother of two teenage daughters decided to not take any chances with her safety. A former call center worker who was unemployed at the time of the rape, she has spent most of the past year at home while she looked for a job.

“I never stepped into a discotheque since then. I hardly go out with friends. I miss my life,” she says wistfully, sipping tea and nibbling on croquettes at a reporter’s house. She agreed to visit only after receiving reassurances that no one else would be home.

Her sense of isolation grew as her neighbors – many of whom used to celebrate Christmas and the New Year at her apartment — began to grumble about her. Katrina often came home at odd hours when she was running a call center, but after she went public with the rape, she said that her neighbors complained about her comings and goings.

“No matter how early I returned, everyone would suggest I got back late – hinting that I was in the wrong and had invited my rape,” Katrina said

Whenever she had guests or her teenage daughters stepped out, she said her neighbors would whisper: “Look! There they go!”

“Luckily, I have very strong girls,” she said. “I know they will protest every injustice, but I am scared out of my wits for them.”

Biswanath Acharya, one of her former neighbors, said the complaints about Katrina were purely for security reasons. “We objected about the odd hours in which she would leave and return home, or some of her friends – usually male – would visit her.”

His wife, Durga, said that while she supported Katrina’s decision to report the rape, she said that they got updates on the case from television and never from her. “We came to know from her landlord that she was facing a financial crisis as she couldn’t pay her rent,” she said. “But we were not close enough to discuss about her job requirements. Frankly, looking at her, you wouldn’t know she didn’t have a job.”

Katrina eventually moved, deciding that she didn’t want to deal with the dirty looks and snide remarks. But even while she was looking for another apartment, she was reminded of her status as a rape victim. She said landlords would take her deposit, make inquiries about her and finally return the money. They would tell her, “We can’t rent this flat to you. Surely you know why,” she recalled.

The government was partly to blame for Katrina’s plight since it didn’t offer her much help, said Bharati Mutsuddi, a senior advocate of the Calcutta High Court, who was also a member of the West Bengal Commission for Women when the Left Front governed the state. “The role of the state could have been to offer her succor, strongly supporting her in the case and to ensure she remains strong, mentally and physically,” Ms. Mutsuddi said.

The current head of the women’s commission, Sunanda Mukherjee, said that the commission was already handling many cases and that Katrina needed to file a case with the commission if she wanted aid.

Katrina ended up finding another apartment on her own, and, after many interviews that never went anywhere, another job. About six weeks ago, she was approached by Santasree Chaudhuri, an entrepreneur and a women’s rights activist, to work at a hotline she founded for victims of sexual and domestic violence, called Survivors for Victims of Social Injustice.

Ms. Chaudhuri, who was out of the country when Katrina’s case was first reported in the media, learned about Katrina after returning to India and contacted her through a nongovernment organization. “She came to my place and immediately offered me this job,” Katrina said.

She started the new job about six weeks ago. “Now I meet so many women and encourage them to go on fighting for their rights, and it feels good to support them in this manner,” said Katrina, who has been inspired to write a book about her own experience.

Katrina said she was hopeful that the next generation will have a more sympathetic view of rape victims, as her daughters’ friends have stood by them. “No snide remarks, no ditching my darlings because of my rape. I’ve been to parent-teacher meetings, and my children’s friends all surround me and chat,” she said.

She said although she had initially regretted coming forward about the rape, those feelings quickly dissipated, and now she was determined to see her case through to the end, no matter the cost.

“Had I died that night – and it’s only a miracle that I am alive – people would have sympathized,” she said. “The fact that I am alive, screaming, protesting with courage no matter how much I am crumbling inside, makes everyone angry. How can a raped, brutalized woman still have so much of courage and voice? They want me to break down.”