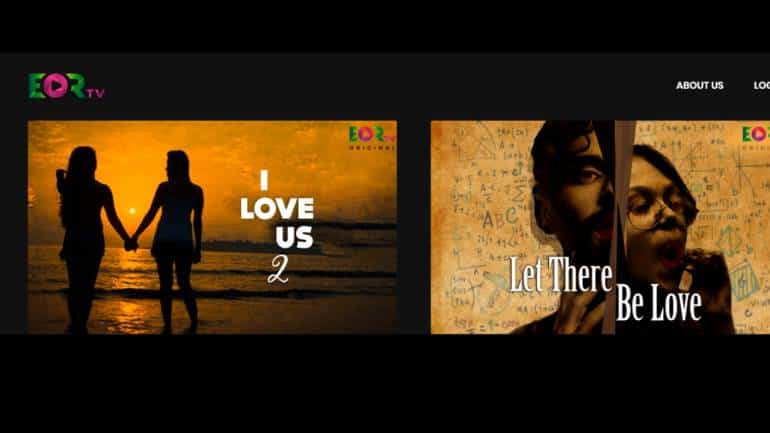 Targeting three to four million subscribers in the first year of its operations, EORTV’s original content will tell stories of the LGBT community.

With the launch of its website last week, India has got its first LGBT-focused video-streaming service called EORTV. An app is to follow soon.

EORTV is a play on YOUR TV, with E representing equality, creators of the platform said. EORTV will not only provide original content for the LGBT community but also offer it a chance to showcase its talent.

How is EORTV different

“In our originals, what we are showcasing is not the struggles or unacceptance in society of the LGBT people. Our stories are love stories,” EORTV executive director Kaushik Izardar said.

The series were to begin streaming in March but the coronavirus outbreak and the lockdown delayed the shooting.

Five stories, with a runtime of five and a half hours each, were ready to go on the floor, said Izardar, who has a wide experience of the industry having worked with Viacom18 Media, ZEEL, INX Media and Fulford India Limited.

EORTV, which has set itself a stiff target of three to four million subscribers in the first year of its operations, has been working on original shows, all focused on the LGBT community.

“Even if a girl is falling for a girl, the family is accepting. We have a series where a young boy finds out that he has a soul of a girl and who has a fascination for sarees or makeup and children around him accept this,” said Izardar.

Along with Izardar, industry veteran Deepak Pandey has joined EORTV as an executive director. He started his career as a cinematographer for TV.

He has also worked on films like Pink Mirror, Yours Emotionally and Baat Ban Gayi.

For long, films and television in India have shown a lack of sensitivity and understanding in their portrayal of LGBT persons, say experts.

On the big screen, there have been some notable exceptions like Deepa Mehta’s Fire or Onir’s My Brother Nikhil or Aligarh. But films have mostly reinforced prejudices and are stereotypically over the top when it comes to the LGBT people.

Karan Johar’s Dostana was criticised by the LGBT community for the stereotypical representation of gays. However, Neeha Nagpal, who is among the five lawyers who fought the legal battle to modify Section 377, said Dostana educated the masses and also promoted acceptance as well as tolerance for sexual minorities.

The Supreme Court in September 2018 read down Section 377 that penalised consensual sexual relationship between two adults, saying any discrimination based on sexual orientation violated fundamental rights.

While the film industry has been blamed for being sensitive enough, experts say video-streaming platforms are more aware and even-handed in their treatment of subjects like homosexuality and transgenderism. They also give a better representation to the community.

The protagonist in the Amazon Prime Video’s popular show Made in Heaven is gay but is comfortable with his sexuality, which he doesn’t wear on his sleeve. And perhaps that is the reason it is one of the top streaming shows.

Kubra Sait, who plays a transgender in rival Netflix’s Sacred Games, came in for praise but many in the LGBT community said a transperson could have been picked for the role instead of a cisgender actor.

Cisgenders are people whose identity matches the sex they are assigned at birth.

Cis actors playing transgender characters is a huge debate in the entertainment industry.

Can EORTV be a game-changer?

The platform in its originals is offering work to people from the community.

The platform had already created and would give even more opportunities to the LGBT community in the entertainment industry, Izardar said.

When the focus is on creating good content representing all gender identities, it automatically creates an opportunity for people from the LGBT community. The proof of this is recent examples of shows and films.

From sending feedbacks on scripts to being on the edit table, film editor and screenwriter Apurva Asrani, who is gay, was a crucial part of Made in Heaven.

India is in the middle of a streaming boom, with several homegrown streaming services. There is fierce competition for an audience that has also got a taste of international offerings through Netflix, Amazon Prime Video and Hotstar Disney.

EORTV will find takers as its market would be niche and untapped, Elara Capital Vice-President Karan Taurani, who closely tracks media and entertainment space, said.

“The platform is likely to get traction as in India as the number of people watching such content has increased,” Taurani said.

He, however, said a target of three to four million users in a year was ambitious.

“India has almost 380 million users on the internet. Hence getting two to three million may take time but close to one million should not be a problem,” he said.

EORTV is looking at a hybrid model. The original content would be behind a paywall and the rest would be free to view. They should probably look at a complete free model to begin with, Taurani said.

“I doubt if consumers will pay for it (content on EORTV). There is only a niche audience for such content and when you make it pay-based, the target audience becomes even smaller. Hence, a free model to start with will be preferred. Also, such a service will be able to create a scale in bigger markets only,” he said.