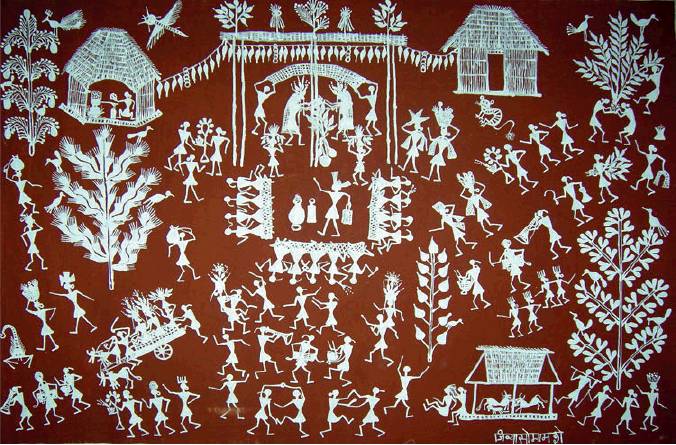 Jivya Soma Mashe was fascinated with tribal art since the age of 11.(HT) Mashe was given a state funeral at his ancestral home in Ganjad, which was attended by tribals and lovers of Warli art on Tuesday afternoon

Padmashri Jivya Soma Mashe, who pioneered the Warli art movement, is no more and I am experiencing his loss just like the rest of his family and the countless people whose lives he touched.

I still remember the first time I met him almost 15 years ago. I had organised a trip to Dahanu for some Italian gallerists who wanted to meet the legendary ‘other master’. They wanted to try and convince him for a show. We drove down to the picturesque Dahanu village and found Jivya picking runner beans in his backyard for lunch. I’ve never met an artist so down-to-earth and barely aware of his immense talent and the effect it had on people.

That day a bond was forged between us and he agreed to present a show in Italy. Not only did he provide his works, he also agreed to be there for the opening and demonstrate as well. While the Italian guests were dressed in their fashionable formal best, Jivya was in his usual trademark white shirt and cotton half-trousers, completely at ease with himself and unaffected by the adulation that was being showered on him. He sat down on the ground with his canvas that had been prepared with a coating of cow dung and started painting using the special needle-like twigs of the ‘taad’ tree that dots the landscape of Dahanu.

Indeed, this is how I will always remember him – crouched over his paintings while sitting on the floor, a pose in which I often found him whenever I visited Dahanu.

Over the years, I assimilated in his family. In a sense, I was their link to the outside world – a trusted friend to whom Jivya, his sons Sadashiv and Balu and grandsons would turn to if they needed advice on dealing with an art dealer or gallery. I would be the person they would turn to when there was a show planned abroad and they needed to get their documentation in order. I am honoured to have been made a part of their inner circle, being given a glimpse into their lives and, at times, sharing their simple meals comprising bakhri and vegetables grown in his farm and humble home.

There was never any doubt about his talent and genius; there wouldn’t have been so many collectors queuing up to buy his works, both in India and abroad, if he did not have that special spark. His most famous works include ‘The Fisherman’, ‘Birds’, and ‘Ants’. With simple formatting and life subjects like ‘Wedding’, ‘Farming’, ‘Diwali’, ‘The Warli Gods’, his art was equally popular among the art lovers and collectors. We were all thrilled when he received the Padmashri; indeed a well-deserved honour. He was even generous in the teaching of his art; there are many young artists, mentored by him, practising Warli art. Though he taught them the folktales and how to render them on canvas, his unique style of painting remained his own till the end.

His sons and grandsons carry on the legacy. As time took its toll on Jivya, he became more of a recluse, sending his children for art workshops and exhibitions abroad. But his doors were always open for me. I will cherish his memory forever. The world has lost not just an exceptional artist but also a wonderful human being who epitomised the words ‘simple living; high thinking’.

Born on March 13, 1931, Mashe was fascinated with the tribal art of living and decided to propagate the rich tribal life through Warli paintings, which is the traditional tribal form of painting.Since he was 11 years old, Mashe was particularly fascinated with tribal weddings and would portray scenes from weddings through his paintings, said Narendra Patil, a social activist who knew Mashe. His paintings adorn the drawing rooms of fans spread across Russia,Italy, Germany, Japan, China, UK, Belgium and many other countries,said Patil.

In 1975, the then Prime Minister Indira Gandhi told Bhaskar Kulkarni,a senior member of the Crafts Board, Delhi, to find a traditional painter who could depict the tribal way of life, Patil said. Kulkarni came across Mashe’s paintings and presented him before the late PM, who was fascinated with his work, and encouraged him to spread Warli paintings worldwide, Patil said. In 1976, the then President of India Fakruddin Ali Ahmed allotted 3.5 acres of land to Mashe in the then undivided Thane district to propagate Warli art. However, Mashe got the land only after 35 years, in 2011, after the intervention of then Congress vice-president Rahul Gandhi.

When Mashe was 7 years old, he lost his mother and was rendered speechless for a few years due to the trauma. Due to the tragedy, Mashe and his family shifted from Dhamangaon in Talasari to his present home in Kalambipada in Ganjad, said Ramakant Patil, another social worker who knew Mashe. When he was speechless, he would communicate with people by drawing images on paper and on the sandy ground,Patil said.

Mashe’s work was highly acclaimed and he won a host of awards. Navnath Zare, resident district collector, Palghar, said Mashe was awarded the Padmashri in 2011 for propagating the Warli art form. In 1976, he received the National Award for Warli art. In 2002, he received the Shilp Guru award, a Government of India award given to master craftsmen. In 2009, he was the recipient of the Prince Claus Award fro Warli tribal painting, said Zare. The Prince Claus Awards are presented by the Prince Claus Fund for Culture and Development to honour ‘artists, thinkers and cultural organisations in Africa, Asia, Latin America and the Caribbean,’ whose artistic and cultural work makes a positive contribution to the social development within their country. Mashe was also given a cash award of Rs17 lakh by the Queen of Belgium for his traditional Warli painting skills and was felicitated by Tokio Hasegave, the founder director of Mithila Museum,Tokamachi, Japan.

He is survived by two sons, Sadashiv and Balu, who are carrying on the legacy of their father, and a daughter