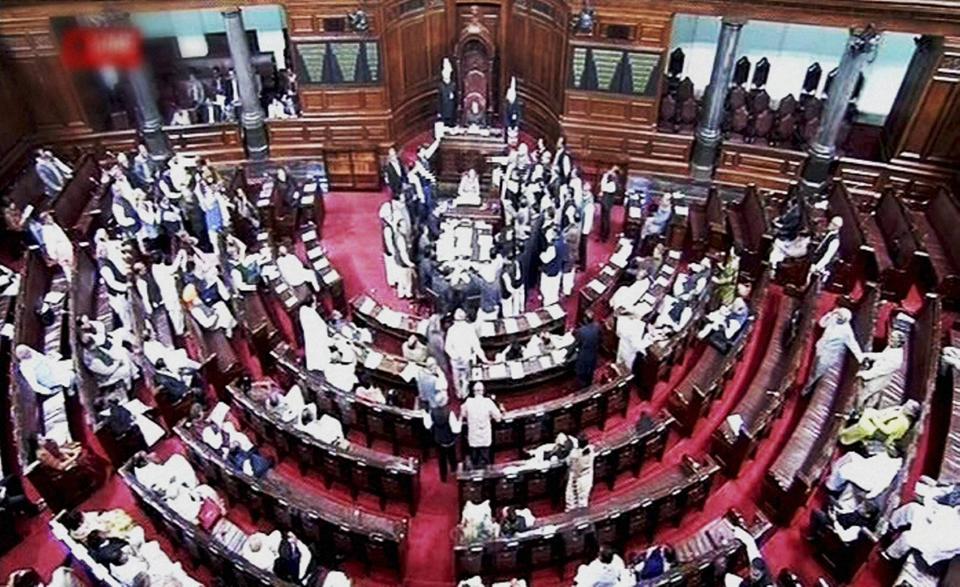 NEW DELHI:
HIGHLIGHTS
Anantkumar Hegde had said BJP will “soon change the Constitution”
Party sources said the minister will not speak on the matter at all
The opposition wants Mr Hegde to be sacked
The government has distanced itself from the latest controversy scripted by union minister Anantkumar Hegde, who has said that his party, the ruling BJP, will “soon change the constitution,” which mentions the word “secular.” The opposition protested loudly in parliament today, disrupting both Houses as they demanded that Mr Hegde be sacked.

“The Government does not subscribe to views expressed by Hegde,” union minister Vijay Goel told the Rajya Sabha, the upper house of parliament.

Outside parliament, Defence Minister Nirmala Sitharaman said, “The government has already said it is not on the same page with Hedge. Only five days are left now in the session. I hope Opposition will come on board now.”

anant kumar hegde ani
Anantkumar Hegde, known for making controversial comments, has been in a series of rows.

But a plan for Mr Hegde to clarify his comments in parliament has been shelved, with party sources saying that the minister will not speak on the matter at all.

The opposition is clear that it wants nothing short of Mr Hegde’s resignation. The Congress’s Ghulam Nabi Azad, also leader of opposition in the Rajya Sabha, said if a person doesn’t believe in the constitution, “he has no right” to be a member of parliament.

Opposition members gathered around Chairman Venkaiah Naidu’s chair and shouted slogans of: “Baba Saheb ka yeh apmaan nahin chalega (this insult of Babasaheb will not do),” accusing Mr Hedge of denigrating Babasaheb Bhimrao Ambedkar, the chief architect of the constitution.

Protests forced the Lok Sabha to adjourn for nearly an hour. Prime Minister Narendra Modi, usually in the Lok Sabha on Wednesdays for questions related to the PM’s office, was not present as he was attending new Chief Minister Jai Ram Thakur’s oath ceremony in Himachal Pradesh.

Anantkumar Hegde, 49, is the Minister of State for Skill Development and Entrepreneurship and a five-term Lok Sabha lawmaker from the Uttara Kannada constituency in Karnataka. He was speaking at a function in his home state when he urged people to “claim with pride that they are Muslim, Christian, Lingayat, Brahmin, or a Hindu,” and added, “Those who, without knowing about their parental blood, call themselves secular, they don’t have their own identity…They don’t know about their parentage, but they are intellectuals.”

Chief Minister Siddaramaiah said Mr Hegde has “clearly not studied the constitution, does not know parliamentary or political language,” and must know that “each and every individual in this country is an Indian, And every religion has equal right and opportunity.”

The Karnataka BJP too has distanced itself from Mr Hegde’s comments. “The party (BJP) doesn’t want to get involved with what Hegde has said. What he spoke about is not an issue for us,” BJP spokesperson for Karnataka, Vamanacharya, was quoted as telling news agency IANS.