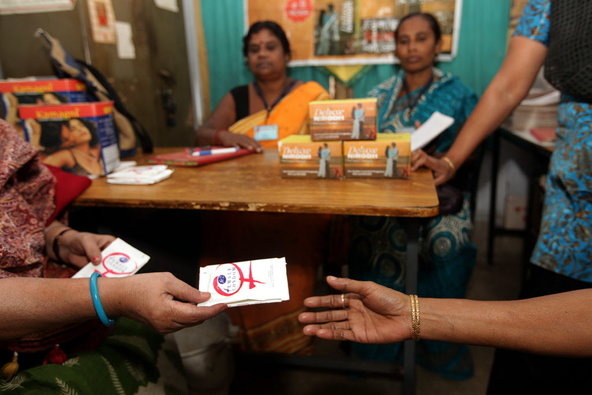 Piyal Adhikary/European Pressphoto AgencyA sex worker receiving a condom at a health clinic in Sonagachi, in the eastern Indian state of West Bengal. The head of the National AIDS Control Organization said condom promotion had been directed at high-risk groups.

NEW DELHI — India’s new health minister, Dr. Harsh Vardhan, has said that he would like to see a change in the way that the government promotes awareness of AIDS and H.I.V., with more emphasis on “promoting the integrity of the sexual relationship between husband and wife,” which he said was “part of our culture.”

“The thrust of the AIDS campaign should not only be on the use of condoms,” he said in a telephone interview last week. “This sends the wrong message that you can have any kind of illicit sexual relationship, but as long as you’re using a condom, it’s fine.”

India reported its first case of AIDS in 1986, and for some years, there were fears that it would become a crisis on the scale that it hasbecome in Africa. The National AIDS Control Organization, a government body, was established in 1992 to deal with the threat.  Over the years, it emphasized the use of condoms and clean needles for high-risk groups — including sex workers, drug users and gay men.

The projections for AIDS in India turned out to be inflated, however, and while the country today has the third-largest population of H.I.V.-infected people — 2.1 million, after South Africa (6.1 million) and Nigeria (3.4 million) — the prevalence is just 0.3 percent of the total adult population, below the threshold of a generalized epidemic, and confined largely to high-risk groups. A 2011 United Nations AIDS report found that new infections in India had dropped by half in the last decade.

In India, more than 85 percent of the cases are a result of unprotected sex, according to the National AIDS Control Organization.

V.K. Subburaj, the head of the organization, said that condom promotion was not directed at the general public, but rather at high-risk groups, like most of the agency’s activities.

“The minister thought that we were promoting illegal activities through condoms,” he said.

Sex work is illegal in India, and the Supreme Court reinstated a law last December criminalizing, among other things, gay sex.

Mr. Subburaj said that the promotion of condom use for high-risk groups was unlikely to change.

“For the vulnerable groups, we cannot tell them about morals,” he said.

But addressing Dr. Vardhan’s comments, Mr. Subburaj said that the “moral fabric” in the country was “becoming very thin,” and he added that his agency would make changes to the information, education and communication strategy and increase its activities, particularly for the general population.

The “Abstinence, Be Faithful, Condom Use,” or “A.B.C.,” campaign is a long-running strategy to promote H.I.V./AIDS awareness globally and is said to have had success in countries like Uganda, which has drastically reduced its incidence of AIDS and H.I.V.

Mr. Subburaj declined to give further information about the specifics of a change in messaging, saying that the consultations with Dr. Vardhan had happened only recently.

This is an uncertain time for India’s AIDS efforts, as the Bill & Melinda Gates Foundation, which worked with the government from 2003 to 2013 to help implement the national AIDS program, has exited the effort, and the government has been tasked with taking up the program alone.

Any shift in communications strategy away from condom promotion, even if it were only for the general public, would raise alarm bells for some AIDS activists.

Anjali Gopalan founded and runs the Naz Foundation, which helps people living with H.I.V./AIDS and spreads awareness of the disease. Naz has also lobbied against the reinstatement of Article 377, the law criminalizing homosexuality, and has run a peer education program on sexuality, gender-based violence, and HIV/AIDS, disseminating information at colleges and universities in Delhi.

“The reality is that people do step out of marriage, and therefore you have to deal with it, and ensure that they do not bring back infection,” she said.

“This whole debate about what is moral in our culture, I think we really need to look at it,” Ms. Gopalan said. “What culture are we talking about?”

India - We need a Civil Disobedience Crusade against CAB
Why Oscars 2017 was symbolic of the anti-Trump America
Bela Bhatia’s partner Jean Dreze - what about all those who are being harassed in Bastar on a daily ...
Kudankulam power output to start by April-end