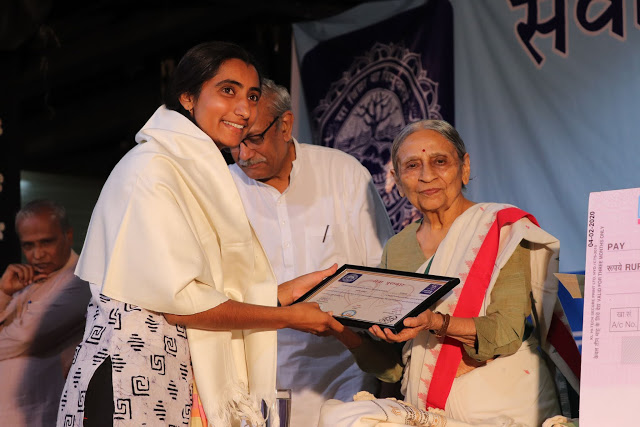 Bharati being felicitated by Ela Bhatt

Founded by Mahatma Gandhi a hundred years ago, Gujarat Vidyapeeth was in news recently for allowing police to enter the campus for the first time ever. The occasion was, some Vidyapeeth students were identified flying objectionable kites on the Makarsankranti day, January 14. The ire was against those who were flying kites printed with anti-Citizenship Amendment Act (CAA), anti-National Register of Citizenship (NRC) slogans – a “seditious act” from current standards!

Ever since this incident took place, I had not visited Vidyapeeth, which has long been regarded by those identified as “left-liberals” as the only island left in Ahmedabad where they could express themselves freely. Indeed, Vidyapeeth was one institute where they could openly hold meetings, criticize the saffron rulers currently ruling the roost in India, though, surely, more recently, pressure had begun being exerted on those who are at the helm of affairs of Vidyapeeth not to allow them in.

Vidyapeeth authorities now are known to deny space to human rights activists, though it all began exactly a year ago, when civil society activists held a meeting in Vidyapeeth on the theme “erosion of Gandhian values.” Organized by Delhi-based India Inclusive, and called India Unites Convention on Nonviolence and Harmony, someone in Prime Minister’s Office is said to have rung up to Vidyapeeth top brass not to allow the meeting. The meeting took place, as the PMO was a little late in conveying the message. People had already gathered, and couldn’t be asked to go away.

When my dear friend Sanjay Dave, who runs an NGO communications network called Charkha in Ahmedabad, sent across a WhatsApp message on February 28 to come over on the next day and participate in a press conference following the award giving ceremony to 15 young Gandhians at Gujarat Vidyapeeth, I got interested. I wasn’t interested in the event itself, but instead wished to see and feel how much the atmosphere in the Gandhian institute had changed.Gujarat governor Acharya Devvrat, a former Arya Samaj pracharak-turned-politician, was called to felicitate the Gandhians whose “hair hadn’t yet greyed”. But he didn’t turn up. Perhaps he thought the function wasn’t up to his level. The job fell upon the shoulders of a humble Ela Bhatt, veteran Gandhian activist and founder of one of India’s biggest, though “purely” non-political, poor self-employed women’s trade union, Self-Employed Women’s Association (SEWA).

Following the function, all young Gandhians, including a couple of Sarvodayists, were “displayed” before the media to tell the reason why they were being felicitated. Chosen by the US-based organization, Gandhian Society, run by a 76-year-old non-resident Indian (NRI), Bhadra Butala, who, I overheard, also handed over an award of Rs 51,000 each, the person who helped make the choice was, Hasmukh Patel, known for his excellent grassroots-level work among Dalits and tribals of North Gujarat.
A businessman, Butala said, he “enjoys” doing this type of activity because he “loves” Gandhi, that instead of offering help to the “babas” and “bapus” who had flourished across India, as many NRIs do, he decided to do whatever he could to encourage young Gandhians in their activity. Flanked by the 15 awardees, he said, all of them have been working to improve the difficult conditions in villages, where the situation remains “terrible.”

Hasmukh Patel, a veteran activist working in North Gujarat, was more forthright. He said, the reason why he made the choice of these young, dedicated Gandhians was because of the gruesome times we live in. Without directly referring to the violent hate campaign on in Delhi, which is witness to the worst communal clashes in the national capital since 1984, he said, it is most unfortunate that those who give slogans like “desh ke ghaddaron ko, goli maro saalon ko” (traitors should be shot) are becoming increasingly aggressive today.

Not they, but we, who don the Gandhian mettle, are responsible for this. We have not been able to do our work properly, one reason why this atmosphere of hate has come to stay

“Not they, but we, who don the Gandhian mettle, are responsible for this. We have not been able to do our work properly, one reason why this atmosphere of hate has come to stay”, he asserted, adding, “There are a large number of Gandhian volunteers who are doing excellent work across India. They are all scattered. Our attempt is to bring them together. These are all crazy people, unsung heroes. There is a need for a Gandhian peace corps, which could work as an alternative in today’s atmosphere.”

Each of the 15 activists introduced themselves, giving details of their activities. The activities include helping poor tribal children in inaccessible hilly tracks of North Gujarat’s Banakantha district to go to school, working among orphaned children of rural areas of Valsad district in South Gujarat, venturing into milk cooperatives, sanitation and toilet construction for the weaker sections, promoting self-help groups, campaigning for making rural areas plastic free, promoting organic agriculture and reviving water bodies.

There was one who stood out, though she spoke the least. She was Bharati, a young woman from Junagadh, who is currently working in a Naxal-infested area of Chhattisgarh, where people are “caught” between police violence and extremist violence. She wondered how to apply non-violence here or how to spread Gandhian principles of truth and violence, to which she has no answer, even as she continues in the forest areas persuading people to send children to schools. Exactly a month ago, well-known Gandhi expert Ramchandra Guha was in Ahmedabad. Even as each of the young Gandhians was introducing themselves, I recalled what Guha had said while addressing an august audience: That Gandhi defined swaraj in 1921 as standing on four basic pillars: Removal of untouchability, promotion of khaddar, Hindu-Muslim unity, and non-violence. You remove one, and the entire edifice falls. These four pillars, to Guha, had a wider meaning in today: Social justice and gender equality, environmental sustainability, unity in diversity of religion, language and region, and non-violent struggle, respectively.

As the young Gandhians were introducing themselves, one of the few socially aware journalists of Gujarat, Rathin Das, sitting next to me, murmured to me: Who among them are working to fight untouchability? This prompted me to pose a question to the organisers of the function, Bhadra Butala and Hasmukh Patel, whether the four Gandhi pillars were taken into account while selecting the award winners. I had to repeat the question twice to a visibly puzzled Butala. He replied, he didn’t know about these pillars, that times have changed, and that he chooses progressive thought while rejecting regressing thinking.

Hasmukh Patel, who has been to jail for a year during the Emergency, where he got married, immediately came to the rescue of Butala, reminding me that “those of us whose hair have gone grey” have to pass on the mettle to the younger generation in order to fight for social justice in a Gandhian framework. “The 15 persons whom we have chosen are all very dedicated. Some of them have left their lucrative jobs in US in order to work in villages, where caste structures are extremely sensitive, which is not the case in urban areas”, he said, adding, “Dedicated as they are, they will surely take up Gandhian values in their struggle… We will have to work in this direction.”
For some strange reason, more questions were not allowed, the media meet split, and journalists were asked to talk “one to one” with young Gandhian activists, who had to be rushed for lunch!