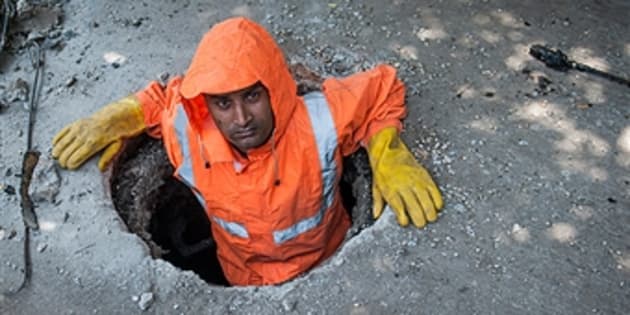 GETTY IMAGES
The sewer divers of Delhi risk their lives to unclog the city’s maze-like drains. Dubbed ‘manual scavengers’, the workers wade through human waste for 30 days a month and are paid just Rs 300 a day – regardless of their level of experience.

Since the Indian Parliament outlawed manual scavenging in 1993, the very existence of a dry latrine became illegal. Bezwada Wilson‘s Safai Karmachari Andolan would take a crowd of former manual scavengers, mostly women, to demolish dry latrines wherever they could find them. On one occasion, they even did it inside a court complex!

The resulting hullabaloo around the demolition would help Wilson spread awareness about the law against manual scavenging. This is just one of many ways in which Wilson has brought down the numbers of manual scavenging from lakhs to a few thousand.

The story begins in 1986. That was the year when Wilson finished school in Karnataka’s Kolar district. He decided to volunteer to teach children in his sweepers’ colony. He found that there was a high drop-out rate among the students.

Why did you dropout?

“Our parents are alcoholic, they don’t want to send us to school.”

Popular In the Community
Liberals Should Be More Outraged Against How Fundamentalist Islam Victimizes Women
Mohamed Ameen2h
Good education concentrating more on women may eventually solve some of the problems that the article discusses   Muslim countries vary greatly in their culture, traditions, and social systems, and there is a wide range of attitudes toward educating women at the university level. For example, in Egypt, women have attended university since the 1920s The percentage of females enrolled in science and technology university courses ranges from 70% in the United Arab Emirates to 8% in Djibouti; in Egypt, 35% of science undergraduates are women For example, at The Lebanese University, the percentage of women studying engineering increased from 16% in 1992–93 to 20% in 1996–97, and in Syria, the total percentage of women studying civil engineering increased from 14.4% in 1980 to 30.5% in 1994. A few female scientists from Muslim countries serve on national and international committees http://www.sciencemag.org/content/290/5489/55.full
Celebrate Khizr Khan, But Don’t Forget What He Revealed About American Muslims
Harmony Dandapani3d
“course Khizr Khan’s emotional testimony does not change some uncomfortable facts. Humayun Khan died in a war that was founded on a lie perpetrated by the government of the United States” It was a lie begun by Bill Clinton who signed the Iraq Liberation Act who said at that time”there is an attempt here, based on the whole history of this operation since 1991, to protect whatever remains of his capacity to produce weapons of mass destruction, the missiles to deliver them, and the feed stocks necessary to produce them”   Mr. Roy: you and your fellow travelers need to get over the fact that getting rid of Saddam was embraced by an overwhelming majority of Iraqis and is still the case. The war’s aftermath is not what they wanted but the fault for that lies with the Bush and Obama administrations. The former for bungling post-war administration and the latter for stubbornly refusing to leave troops behind as the situation improved after 2007
Professional Joint Roller Earns Up To $7,000 For His Creations
johnny peace6h
I don’t understand a few things here.

He asked the parents: “Why do you drink day and night and not spend on your children’s education?” “We drink because our work is such.” “What is your work?” “Cleaning toilets.” “But why does it make you drink?” “Our working conditions are bad.”

What did they mean by bad working conditions? Why do they make them drink alcohol? Or was it all just an excuse?

Wilson wanted to see it from himself, but they won’t let him. He followed them on the sly and found them picking up human excreta from dry latrines and putting them in buckets.

Wilson wanted to see it from himself, but they won’t let him. He followed them on the sly and found them picking up human excreta from dry latrines and putting them in buckets. One karmachari’s bucket fell into a pit of human excreta and he put his hands in there to pick up the bucket. Wilson pushed him away. “What are you doing? Let me do my job,” the manual scavenger shouted back.

“That day I cried for the first time,” Wilson said. He went home and told his retired parents about it. He was in for more surprise. “This is what your parents did all their lives,” they told him.

That day, his life changed, and so it did for the lakhs of manual scavengers all over India.

The people in his colony were employed by Bharat Gold Mines Public Ltd. Kolar had India’s first labour union for the scavengers, but the Marxists just wanted to use them to have a bucket of human excreta strewn outside the houses of those who didn’t strike. The excreta had to be later cleared by the same scavengers.

The manual scavengers did not want to make it an issue. Bezwada got someone to write a letter to the Bharat Mines officials. The reply denied the existence of dry latrines. He sent them pictures, and dispatched copies of the pictures to the prime minister and all Dalit members of parliament. In 1993, thanks to international pressure, India had outlawed manual scavenging. The Centre got the Bharat Mines to demolish them. The manual scavengers were taken into other jobs.

Wilson then moved to Andhra, where he found that municipal corporations had employed 8,340 karmacharis in 16,380 community latrines in the state. The state government actually employed people to do something that had been declared illegal. This is a likely true even today of the Indian Railways and some municipal corporations in a few states.

Lobbying with Dalit MLAs in Andhra, Bezwada got the government to demolish most of them. Bezwada’s Safai Karamchari Andolan went on a 45-day-long yatra in Andhra Pradesh and Karnataka, demolishing dry latrines that the state government didn’t exist.

At the Nizamabad court complex, the court intervened when they were demolishing the toilet. Wilson got the court to order stopping the demolition in writing, and then wrote to the Supreme Court asking how a local court could violate the law. The Supreme Court had it demolished in 24 hours.

Self-taught in English, fighting caste with humour, Wilson was meant to become part of the Christian clergy, but destiny had something else for him. A follower of Ambedkar, Wilson rebuffed Christian clergy and politicians alike who tried to use him.

Self-taught in English, fighting caste with humour, Wilson was meant to become part of the Christian clergy, but destiny had something else for him.

Once a top politician invited him and said, why don’t you organize a dry latrine demolition and I will join you. Wilson realized this was a way of winning Valmiki votes. “You have such a huge all-India network of party workers, why don’t you ask them to identify dry latrines in their area and demolish them. Then I will come to attend the demolitions,” Wilson replied. The politician was suitably chastised.

Wilson has spent the past many years getting the law implemented, getting central and state governments to rehabilitate manual scavengers – of course the rehabilitation packages are swindled away by politicians in most states. The hardest part has been to nail the lie — governments, municipal corporations and institutions like the railways deny the existence of manual scavenging.

So Wilson’s organization took to undertaking massive all-India surveys to identify manual scavengers, and then do everything they could to make them leave the work. Since manual scavenging paid them so little, Wilson’s organization motivated them to leave it and find alternative work. Anything could pay more. There were those who hid their caste, migrated and found work as house-helps. Others started small roadside shops or took to basket weaving.

In one event he organized, I heard woman after woman speak their stories, with tears of joy. Andolan people came and made us leave the work, they said.

In one event he organized, I heard woman after woman speak their stories, with tears of joy. Andolan people came and made us leave the work, they said. Wilson calls them liberated women. One woman whose face I can’t forget, spoke about how she did manual scavenging for 50 years – right from her childhood. In her old age, she had been liberated.

Wilson has now moved to making lives better for those who work to clean sewage lines and septic tanks, often leading to deaths. With determination, humour and all-round goodwill, there is little doubt he will succeed.

Bezwada Wilson has brought hope and joy to so many lives, the Magsaysay Award is the least he deserves. Most of all, he deserves our time and attention.http://www.huffingtonpost.in/2016/07/27/how-bezawada-wilson-liberated-lakhs-of-manual-scavengers/

Criminal waste of food grain in Punjab?
Arms race: India's expenditure on defence has never been higher
‘Manuski chi Shaala’- Online Marathi prog that focuses on the Constitution is a big draw among stude...
Maharashtra - In 10 years, only 3 doctor suspended for medical negligence #WTFnews