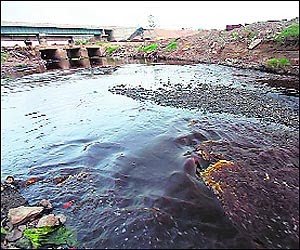 By Our Representative
Acting on a public interest litigation (PIL) filed jointly by the top Gujarat-based environmental body, Paryavaran Suraksha Samiti (PSS), and the Farmers’ Action Group (FAG), the Supreme Court has issued a notice to the Ministry of Environment and Forests (MoEF), the Central Pollution Control Board (CPCB) and the chief secretaries of 19 Indian states, including Gujarat, seeking response on the demand by the petitioners to implement the prescribed pollution control norms, even as ensuring implementation of the “polluter pays” principle in its real spirit,  instead of providing huge subsidies in the name of controlling pollution.

Talking with newspersons, PSS’s Rohit Prajapati said, “The polluter pays principle is being violated at every step. The Common Effluent Treatment e (CETPs), made to treat pollution unleashed by industry, is being highly subsidized. If earlier, 25 per cent of the CETP’s cost was borne by the Centre, another 25 per cent by the state, 25 per cent was soft loan, and only 25 per cent was industrial investment, today the Centre’s contribution is 50 per cent, with the combined contribution of soft loan and industry’s coming down to 25 per cent. We want all subsidy provided by Central and state governments for controlling industrial pollution to be returned, as it was precious public money which industry should pay for. It should pay back with retrospective effect.”

The notice was issued on December 9, 2013 by the Forest Bench of the Supreme Court of India, consisting of Justices A. K. Patnaik, Surinder Singh Nijjar and Fakkir Mohamed Ibrahim Kalifulla, and the PSS and the FAG were represented by well-known human rights lawyer Collin Gonsalves. The PIL was filed under Article 32 of the Indian Constitution under which the individuals may seek redressal for the violation of their fundamental rights. “The PIL expresses concern over the massive pollution of India’s water bodies”, Prajapati said.

Informing that in 2009 Ankleshwar’s industrial area had a Comprehensive Environmental Pollution Index (CEPI) of 88.50, topping the list of critically-polluted areas of India, Prajapati said, “In 2011 and 2013, Vapi industrial area, with CEPI of 85.31, topped this list.” Suggesting that CEPI itself is not comprehensive enough, as it fails to take into account impact on health of workers working in polluting industries and on agriculture, he emphasizes, “A better norm should be fixed to ascertain CEPI.”

Be that as it may, he added, “While pollution itself is deeply worrying, more worrying is that industrialists show no or little concern whatsoever despite the enormity of the crime they commit and the Central and State governments, apart from writing letters from time to time, show no inclination to even take the first step to reverse this trend to restore the health of India’s rivers, water bodies and groundwater.”

· An order to ensure that under no circumstances should any effluent which has pollutants in excess of the norms prescribed, be allowed to flow into any water body in the country or seep into the soil.
· An order that no effluent treatment plants / common effluent treatment plant is permitted, under any circumstance, to discharge effluents with pollution in excess of the prescribed norms onto the land or into any water body.

· An order to desist from subsidizing the costs of effluent treatment plants.

· An order asking independent and reputed agencies, including academic institutions, to conduct studies, in the first instance, in the 43 critically polluted and 32 severely polluted clusters of India as set out above, of the effect on the people, livelihood and animals of the pollution in order to ascertain the polluters and the compensation that they ought to pay to those adversely affected.