India -Is the proposed nuclear plant in AP a cover for massive land acquisition?

Experts say India is being naive when it comes to signing deals for nuclear reactors in the country.

The coast curves through northern Andhra Pradesh and forms a giant U. Deep in the womb of this horseshoe lies Ranastalam mandal of Srikakulam district. During the light winter showers in November, this region takes on a darker shade of green. Small fishing villages are sprinkled across the uneven coast.

People here consider the vast sea their sole asset. “We have been fishermen for generations,” said Juggle Mailapally, ex-sarpanch of Chinna Kovvada village. “I was taught how to stitch a fishing net when I was 9,” he added.

Since 2008, when the Indo-US Nuclear Deal was signed, there have been rumours in the air about a giant nuclear plant taking over their idyllic existence. However only in 2015 did those rumours get confirmed. The District Collector of Srikakulam came to their village to talk to them about relocation, recollected Mailapally.

First, the villagers protested. Then they went on a year long hunger strike, which got the support of several political parties. However, their resilience proved to be weak in front of the government’s grit to see the project through.

Soon there will be six 1000MW nuclear reactors lining the coast. Over 2,074 acres in seven villages –  Kovvada, Ramachandrapuram, Gudem, Kotapalem, Maruvada, Tekkali and Jeerukovvada – will house the reactors, displacing about 10,000 people.

While questions about the viability of the project still persist, people of Ranastalam have had to give up their lands. The Andhra Pradesh government announced in December 2017 that the land acquisition for the project was completed successfully.

In 2014, before the current Telugu Desam Party government was voted into power for the first time in divided Andhra Pradesh, Chief Minister Chandrababu Naidu made a campaign promise to relocate the nuclear power plant from Kovvada and neighbouring villages. “Immediately after he was sworn in, he changed his stance,” said Mailapally.

After his election, efforts on the nuclear plant only accelerated. “Only TV channels owned by the opposition party showcase the hypocrisy and treachery,” said Rajesh of National Alliance for People’s Movements, who is researching the power plant. “Otherwise, the media is fairly jubilant about the project.”

According to the World Nuclear Industry Status Report 2017, the Prototype Fast Breeder Reactor (PFBR) in India has been listed as “under construction” for a decade or more. “The average construction time of the latest 51 units in ten countries that started up in the past decade, since 2007, was 10.1 years with a very large range from 4 to over 43 years,” the report reads.

In Maharashtra, work is yet to begin on the Jaitapur Nuclear Plant whose agreement was signed in December 2010.

According to the Land Acquisition, Rehabilitation and Resettlement Act of 2013, if the government does not use the land acquired for the purposes it was taken, the lands should be returned to the people. “Since nuclear energy is seeing a downward slide across the world, most proposed nuclear plants are tentative. Might never be built at all,” said Dr K Babu Rao, retired scientist, IICT.

Acquiring lands to construct a nuclear facility has certain additional rules. Atomic Energy Regulatory Board (AERB) is the national authority which is responsible for approving construction, commissioning, operation and decommissioning of nuclear power facilities in the country.

As per the AERB guidelines, 1.6 kilometres from the periphery of the project’s rim is exclusive zone – no one can inhabit that zone. Beyond that, upto 30 kilometres, the place needs to be monitored and evacuation-ready. Even though people living within those 30-odd kilometres will be exposed to high doses of radiation, compensation is given only to those whose lands are taken away.

Add to this, India has a weak Civil Nuclear Liability law, which guarantees lower compensation in case of a disaster.

Seven hundred and ninety one acres of the required 2074 acres are government lands, therefore easier to acquire for the nuclear project. However, 684 acres are lands assigned to landless poor, with a condition that they be sold only to the government. And 599 acres are private lands.

“We are paying the highest compensation of Rs 18 lakh per acre for private and assigned lands,” said KVN Chakradhar Babu, Joint Collector, Srikakulam. “In addition, we will pay Rs 9 lakh per acre for encroached land. That is why we have been so successful in acquiring lands so soon,” he added.

Residents of Ranastalam though compare the compensation to Amaravati, the new capital of bifurcated Andhra Pradesh. “If they are being given Rs 48 lakh per acre, why are we being given only 18?” asked K Pentayya, a fisherman in Pedda Kovvada.

While the compensation is being handled deftly, there are more fundamental questions about the Kovvada Nuclear Power Plant. Why did the Government of India tie up with a financially weak nuclear reactor manufacturer? Is the nuclear plant merely a cover for massive land acquisition? Most importantly, does India need nuclear power to meet its growing energy needs?

The Kovvada Nuclear Reactor was to be built by US nuclear reactor maker, Westinghouse. But, in March 2017, Westinghouse filed for bankruptcy. The company was bled to death because of cost-escalations in two of the four nuclear power plants it designed and is constructing in the United States. “Kovvada will benefit only Westinghouse, and no one else. Not the people. Not India’s energy security,” said EAS Sarma, former Union Energy Secretary.

According to Mint, Krish Rajan, Westinghouse vice president, India Business and Project Development, said the company, which has filed for bankruptcy in the US, has a restructuring plan in place. Rajan also said that the bankruptcy proceedings in the US will not affect the design of nuclear reactors in India.

Cost escalations in nuclear plants are common because there are no reasonable estimates of how to process the radioactive waste generated by nuclear power plants. Moreover, cost of decommissioning an aged nuclear power plant is also tough to gauge.

“India is being bamboozled by the multinationals into signing these agreements with foreign companies,” said Dr Sarma. Since the 1979 Three Mile Island nuclear accident in the US, when a Pennsylvania-based nuclear plant malfunctioned, the US has been cautious in using nuclear energy. “It is not just the US, even Europe is not gung-ho about nuclear. So, Westinghouse and GE have very little business,” said Dr Sarma. “They are looking for a market and India is fertile ground of them,” he added.

Westinghouse is not alone. In May 2015, weeks after Modi’s visit to France, a French company announced it was going into loss. Areva, the French nuclear reactor manufacturer, is to design the nuclear reactor in Jaitapur, Maharashtra. The French government is desperately trying to breathe life into Areva. “Again, it is in their favour to woo India. And India is being naive,” said Dr Sarma.

Chinna Kovvada (small Kovvada) and Pedda Kovvada (big Kovvada) are two adjoining villages, which sit lazily by the sea. Sloping roofs of houses in these villages are made of dry coconut leaves. Very few homes are constructed with brick and mortar, an indicator of economic prosperity.

Houses are separated by narrow overflowing drains. Early in the morning, the place smells of fish. “If we pay attention, we can differentiate the odour of one fish from another,” said Sarada Ramudu, a fisherman in Pedda Kovvada. 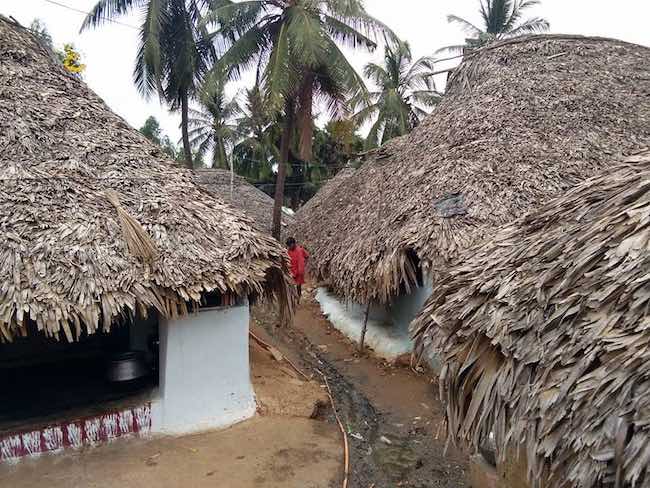 For a few years now, villagers claim, Chinna Kovvada, Pedda Kovvada, Ramachandrapuram and Tekkali have been denied basic infrastructure facilities. There are no concrete roads, buses to these villages are few and far between. Two thousand five hundred families live in these four villages, and most of them rely on fishing for their livelihoods. But, when they do not fish, they have not been provided with alternate employment.

Mahatma Gandhi National Rural Employment Guarantee funds remain unused. “Village development funds have not been released in these parts for some years now,” said Mailapally, who was the sarpanch of Chinna Kovvada between 2008 and 2013. He claims that a local Telugu newspaper had a news item which said that panchayat elections in the villages which were to be held in 2018 were cancelled since the villages would be relocated.

“Prime Minister is pushing for toilets to be built all over. But, that is not so in our village,” he said.

Over a period of time, land holdings in the region have reduced drastically. On average, a family owns about four acres of land. This makes opposition to land acquisition tougher. “It is tough for a Sompeta-like agitation to take place in Kovvada,” said Saraswati, an activist who worked against the nuclear plant.

Saraswati is referring to the struggles of villagers of Sompeta, another village in Srikakulam District, who took turns to sit on a relay hunger strike for six long years opposing acquisition of their fertile multi-crop agricultural land. The struggle was so successful that the leaders were invited to other parts of Andhra Pradesh to replicate their success.

Whether it is due to under development or regular market forces, labour migration is not new in Kovvada. It is common for fisherfolk from the region to migrate to Gujarat or Kerala, where they earn three times as much. K Pentayya from Chinna Kovvada moved to Kochi in Kerala at the age of 18. Since then, he has returned to his village to marry, at his children’s birth, and when his brother wanted to sell some of the land.

His neighbours say his Telugu sounds weird. “That is what they said about my Malayalam initially when I moved,” said the 32-year-old. Initially he did odd jobs like selling fake goggles and balloons on the beach in Kochi. However, now he works with a fisherman.

Almost every house in these villages of Kovvada has a migrant. This leaves the villages with older people or children. “It is easier to uproot us,” said Sarada Ramudu, 60-year-old fisherman who was assigned one acre of land two decades ago. 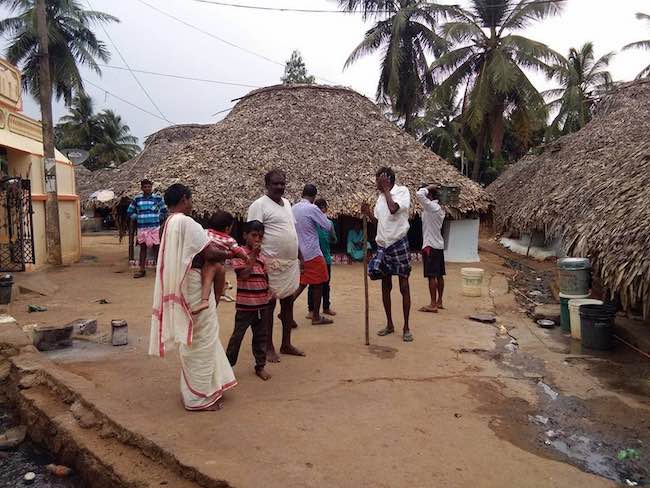 Juggle Mailapally stands with his family in his village. Courtesy: Raksha Kumar

All these factors have ensured successful land acquisition in the villages.

A more basic question remains in the minds of most villagers. Is the nuclear power plant necessary at all? Should we invest in nuclear energy?

“Since India is planning to depend heavily on such foreign reactor suppliers, the future trajectory of nuclear development in the country is going to be uncertain and highly expensive,” said Dr Sarma.

Villagers in Kovvada have no time to think about all that. They are busy trying to think alternate modes of employment in the villages they would have to move into.

Sushma Swaraj pushes for declaring Gita as national scripture #WTFnews
Hathras Rape and Murder -Women huddle over strategy to prevent sexual violence
UP Police Tortured Children Swept Up In CAA Protests
What do Avengers, Black Panther and Wonder Woman have in common?  The Abuse of Women