India – It is a Sham to Celeberate Jharkhand Foundation Day #BirsaJayanti 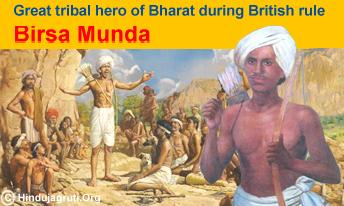 The state of Jharkhand celebrates “Birsa Jayanti” as well as ‘Jharkhand Foundation Day’ today.
Crores being spent on celebration of this ‘auspicious’ day, with the President of India himself being present.
17 years ago, the state of Jharkhand was carved out from Bihar to address “tribal aspirations”.
Tribal Aspirations??
Well that was the said reason.
The tribals had for long struggled for separate statehood so that they can benefit from the vast natural resources that the state was endowed with, and their economic conditions could be bettered.
17 years have elapsed and the newspapers today are singing paeans for the government on achievements made so far.
Well give them money, and they’d even declare Jharkhand as Switzerland of India.
.
Let’s have a reality check on the situation, esp. of the tribals:
1. There are 32 Scheduled Tribes residing in Jharkhand, their population being 26% of the state.
2. Out of 24 districts of Jharkhand, 5 districts have more than 50% ST population while 8 districts have ST population b/w 25-50%.
3. 34% tribals don’t have access to drinking water.
4. 77% tribals don’t have drainage facilities.
5. Literacy rate among STs is 57%, 16% below national average.
6. About 80% of tribal students’ dropout from education system by the time they reach secondary level. This is highest among all categories and among all states.
7. The tribals today are living on social, economic and political periphery. It is ironical that the state that was created to address tribal aspirations, the tribals have got little out of it.
8. Majority tribals are living at a subsistence level, with most of them relying on minor forest produce (MFP) like collecting Tendu leaves, making ‘dona’ out of leaves and selling them in the market to get few rupees. Restrictions have been put even on that by the state, and thousands of innocent tribals are languishing in jails for crimes as petty as collecting ‘tendu’ leaves from jungles.
9. Anti-Naxal operations are being carried out in different parts of the state to get rid of Naxalism. Well that’s the stated reason. The reality is that, the state wants the lands of the tribals, so that they can be given to corporate and mining carried out. And for that to happen, you need to get rid of those tribals, since the tribals would die, but won’t give their land. They consider their land as their mother. So, the state frames up charges against innocent tribals, declares them as naxalites and puts them behind bars (if they’re lucky) or just shoots them (if they’re unlucky).
.
All the above is carried out in a very fine manner. Newspapers never show the reality, and the government gives full page ads, crediting itself with the “vikaas” being carried out in the state. The innocent citizens are unable to figure out the intricacies of dirty politics, and get good feelers through such advertisements.
Who would speak for the rights of tribals?
The general classes don’t have any idea of their sufferings,
While the tribal leaders are debauch and corrupt, often aligning themselves with the state, to get their share of cake.
In wake of such atrocities being committed by the state against its own people, it becomes a sham to celebrate its foundation day.
I, for one, would not like to be a part of it.

Why Govt Deliberations on the Land Ordinance A Secret ?
Tale of two health ministers: One succeed despite failures while other failed despite success
IIT Bhubaneswar professor taken to task for mentally ‘harassing’ girls #Vaw #WTFnews
Enact 'anti-discrimination in education' law: NGOs to Govt