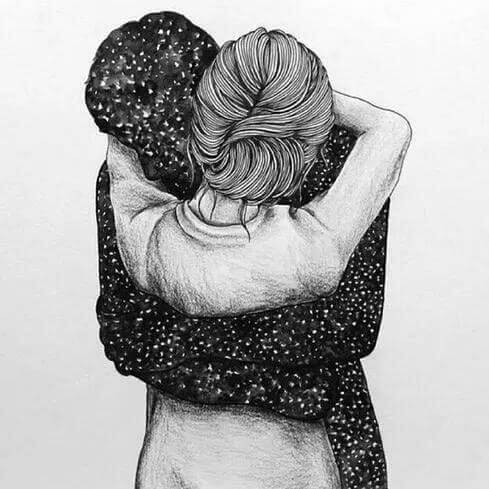 A young woman tried to explain to me the other day why she had broken up with her ex-boyfriend. As she outlined some of their problems, I asked her (my absolute test) – “Did he give good hugs?” “No!” she exclaimed, “very bad hugs! And I need hugs.” There is a lot to be said for hugs, for they suggest a certain ease with the body and human affection.

It reminded me of a poem titled ‘Militant Hugger’ that we published on Agents of Ishq, a site about love, sex, and desire that I run. A woman complains to her husband, they don’t hug anymore (though all other amorousness is ongoing). “We’ve hugged in trains, planes, musty rooms and river banks. In temple towns and mountain tops, in tents and under the star-spangled sky. In secrecy, in mirth, in sadness and in love. And now, there’s no more left?”

Hugs can have multiple meanings. They are a celebration of the magic of human touch and a rendition of many different kinds of love, friendly, familial, collegial, amorous. But there is also something fundamentally affectionate about a hug. Even in a sexual relationship, a hug signals something besides the sexual – something friendly, human, and fundamentally loving.

And yet so many people find it difficult to hug. Another young woman wrote on our site about being hesitant to hug. “It started after a few conversations where I heard friends discuss hugs from friends as over-familiar and predatory,” she wrote. “I became a little self-conscious and aware of how simple gestures could be misconstrued.”

Many people feel this way, among them, the principal of St Thomas Central School in Thiruvananthapuram, Kerala. On seeing a male and female student hug for five minutes, he seems to have combusted because “I had never seen such a shocking public display of affection.” The boy’s parents were called to the school over the alleged indecency. A board member told them their son was like a“bull in heat”. The boy was expelled. The parents went to court – which ruled in favour of the school (what do you expect? It’s 2017, that’s the kind of year it’s been).

Where should one begin about the number of messages this kind of event spits out? One, that a girl could never invite a hug. A young man hugging her must be a predatory “bull in heat” and must be punished. Two that “ek ladka aur ladki kabhi friends nahin ho sakte”. Three, that ek ladki aur ladki or a boy and a boy can be only friends. Lastly, that bull-in-heat hug. How much the principal would benefit from sex education, you know?

Such incidents are too common in schools and colleges. They shame young people for affection, flirtation, romance, crushes, scarring them for life. They make us awkward about our bodies, and all the feelings inside them. They make us separate affection from sex and friendship from romance in unnatural ways. They make us say “just” friendship as if friendship is innocent and sex-ship is guilty, and this is the tone it sets for far too many relationships in adulthood, not to mention making it impossible to have a healthy context for consent.

The indecency is in the gaze, not the hug. There is no point in saying that those with this gaze should be ashamed of themselves. The sad things is, they probably already are. It is their deep sense of shame, about love and sex, given to them when they were young, that makes them turn so violently on young people; to be so incapable of acting with love.

Meet the incredible woman breaking taboos on sexual health and building a more inclusive Muslim comm...
National Squash Player Puts Up Kidney For Sale On Facebook To Fund Tournament #WTFnews
#Censorship - Beep out 'Bombay' from song: Censor Board tells singer #WTFnews
Why Is Women’s Leadership Not in the Headlines?