BY TOMMY WILKES AND SANJEEV MIGLANI 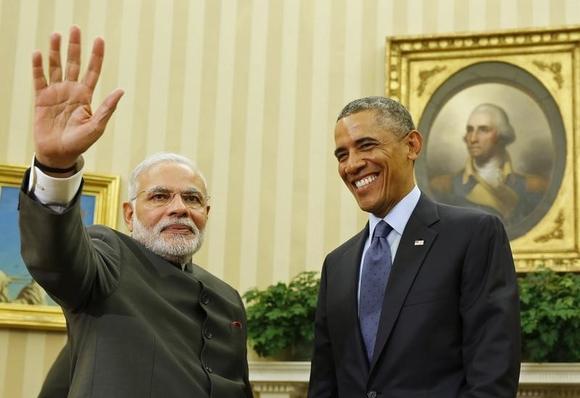 U.S. President Barack Obama smiles as he hosts a meeting with Prime Minister Narendra Modi in the Oval Office of the White House in Washington September 30, 2014.

(Reuters) – India is offering to set up an insurance pool to indemnify global nuclear suppliers against liability in the case of a nuclear accident, in a bid to unblock billions of dollars in trade held up by concerns over exposure to risk.

Prime Minister Narendra Modi’s government is hoping the plan will be enough to convince major U.S. companies such as General Electric to enter the Indian market ahead of President Barack Obama’s visit at the end of next month.

Under a 2010 nuclear liability law, nuclear equipment suppliers are liable for damages from an accident, which companies say is a sharp deviation from international norms that put the onus on the operator to maintain safety.

From the 1950s, when the United States was the only exporter of nuclear reactors, liability has been channeled to plant operators across the world.

India’s national law grew out of the 1984 Bhopal gas disaster, the world’s deadliest industrial accident, at a factory owned by U.S. multinational Union Carbide Corp which Indian families are still pursuing for compensation.

The law effectively shut out Western companies from a huge market, as energy-starved India seeks to ramp up nuclear power generation by 13 times, and also strained U.S.-Indian relations since they reached a deal on nuclear cooperation in 2008.

GE-Hitachi, an alliance between the U.S. and Japanese firms, Toshiba’s Westinghouse Electric Company and France’s Areva received a green light to build two reactors each. They have yet to begin construction several years later, according to India’s Department of Atomic Energy.

Even Indian suppliers refused to sell equipment until the law is amended or they can be sure they are indemnified against any liabilities.

“We are working fast to address the concerns of suppliers. We are working on a solution with the insurance companies,” R.K. Sinha, Chairman of India’s Atomic Energy Commission, told Reuters.

State-run reinsurer GIC Re is preparing a proposal to build a “nuclear insurance pool” that would indemnify the third-party suppliers against liabilities they would face in the case of an accident.

Under the plan, insurance would be bought by the companies contracted to build the nuclear reactors who would then recoup the cost by charging more for their services. Alternatively, state-run operator Nuclear Power Corporation of India (NPCIL) would take out insurance on behalf of these companies.

Sinha said New Delhi believed the insurance plan was the best option given how tricky changing the law would prove, and that the proposal should be ready within the next two months.

Details of the plan have yet to be thrashed out, and Sinha said the government was considering how it would better capitalise NPCIL.

India wants to generate 62,000 megawatts from nuclear sources within two decades from the current level of 4,780 megawatts, even as other countries shift away from nuclear energy following Japan’s Fukushima disaster.

GE declined to comment on the Indian proposal to offer insurance cover. Westinghouse said it needed more information before it could comment.

Areva said in a statement that the creation of an insurance pool was an “encouraging signal”, and that the government appeared committed to working out a comprehensive solution soon.

One Indian company said it was ready to return to the 2,800 megawatt Gorakhpur nuclear power project in the northern state of Haryana it abandoned, once the insurance cover is in place.

Moves to win over the Americans coincide with Russia’s push to build more nuclear reactors in India.

Earlier this month, during President Vladimir Putin’s visit, Russia’s state-owned Rosatom said it would supply 12 nuclear energy reactors for India over 20 years, following two it has already built in the south of the country.

G. Balachandran, one of India’s foremost nuclear affairs experts, said Russia appears to believe it can operate with the existing nuclear liabilities law without suffering a loss.

This week U.S. and Indian nuclear affairs officials, as well as representatives from the NPCIL Ltd, Westinghouse and GE-Hitachi met to advance implementation of the nuclear deal, an Indian foreign ministry official said.

The group is meeting again early next month, before Obama arrives, to move the discussion forward.

Creating the insurance scheme to help projects get off the ground is GIC’s “top priority”, chairman Ashok Kumar Roy said in an email, although he cautioned that the timing, coverage and level of participation were yet to be finalised.