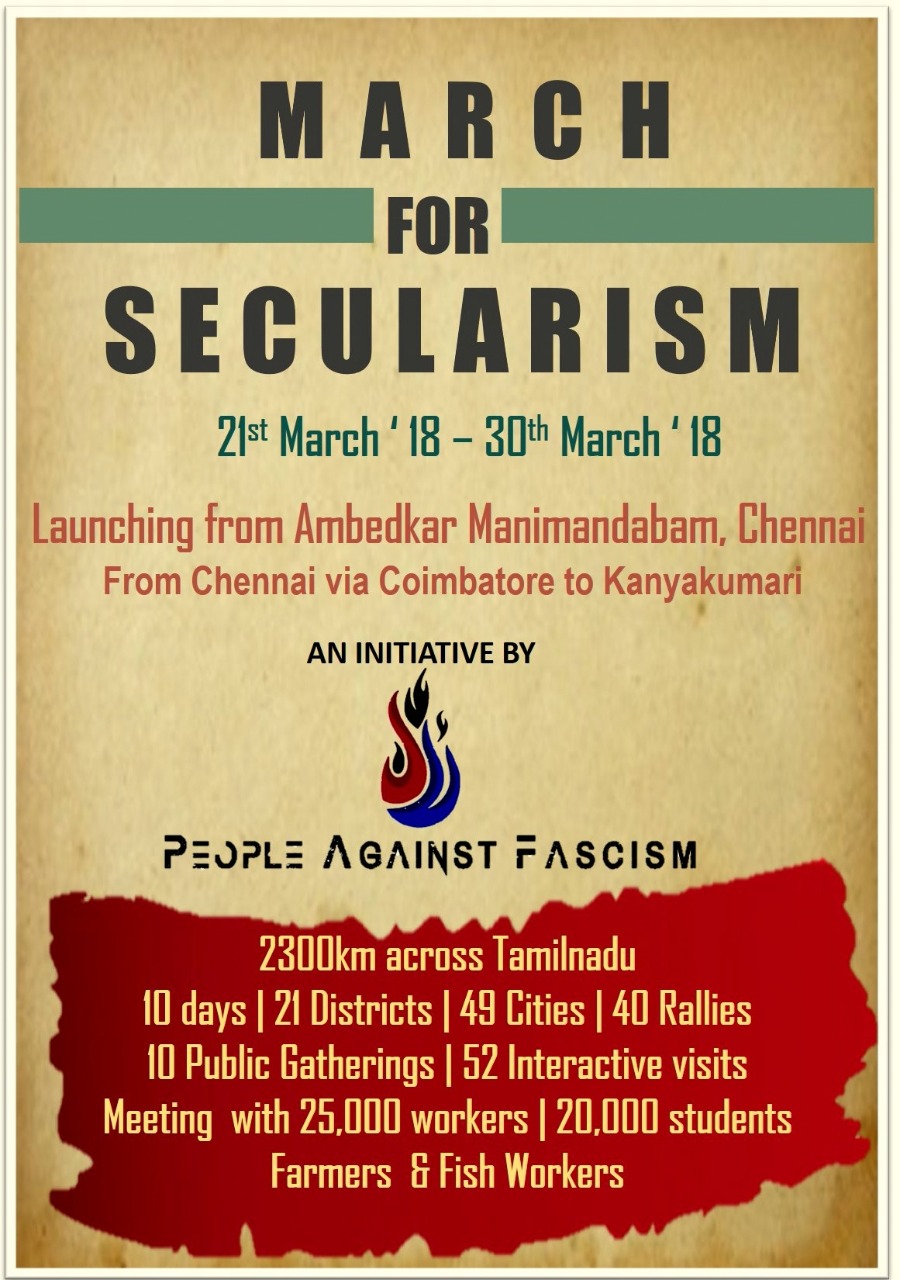 The march will involve a caravan physically designed to invoke secular anti-caste, resistive and rationalist traditions of the modern Tamil era and of earlier literary and archaeological sources. A number of progressive student leaders, students’ groups and secular organisations are eager to be a part of this caravan. We are also talking to a large number of well known activists, personalities, from the fields of art and cinema, as well as individual politicians committed to a secular democratic cause from outside of Tamilnadu, who will be able to extend their solidarity.

It will depart from Chennai on March 21st and arrive in Coimbatore on the 24th .There will be a grand public meeting in Coimbatore the same day which will be in solidarity with Bhagat Singh‘s memorial anniversary. This public meeting will take Bhagat Singh’s message (based on his letters prior to his martyrdom) to a wide audience of students and youngsters.
<

The caravan will then proceed to Madurai, Rajapalayam, Tirunelveli, Rameshwaram and finally to Kanyakumari on the 10th day. All along its route, the caravan will speak to 20,000 students, more than 50,000 struggling workers, farmers in the Cauvery delta region and fishworkers of the south eastern coast, inviting them to rally together against the fascist forces threatening to permanently poison the democratic basis for struggle.

Through continuous pamphleteering, institutional campaigning and targeted public events, the caravan will expressly stand for the protection of and justice for minority communities, for putting an end to their humiliation, and for an alternative progressive agenda of dignified jobs/livelihoods, education and healthcare for all.
A people’s pledge shall be administered on all these points by community leaders and organisers. Tamil Nadu has always been close on the heels of Gujarat and Maharashtra in terms of an alarmingly disproportionate number of Muslim undertrials in prison and detainees in lockups.
Hence, wherever possible, the caravan will make its way to riot hit areas, to areas where the Sangh Parivar or its casteist allies have been trying to leave a mark, reaching out to communities living under pervasive intimidation, State terror or Islamophobic repression.
**************************************
In solidarity and hope
March for Secularism
Ph. no.: 09384632023, 9444689572
[email protected].com

SC: Farmers, not banks, have first right over proceeds from sugar sales
'Himmat' during the Emergency: When the Press crawled, some refused to even bend
India - RTI officer who gave Patanjali land papers quits #WTFnews
Ram Mandir: Supreme Court Judgements Have Contributed To ‘Hindu-isation’ of India