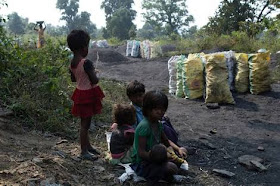 By Our Representative
Raising a major policy issue, a top advocacy group, Mines, Minerals and People (MM&P) has regretted that the plight of the “mining children” is not the responsibility of the Ministry of Mines, Government of India, which looks after all the mines in India, and the result is a strange “mess”: the lives of children as a result of mining has to be addressed by other departments like child welfare, education, tribal welfare, labour, environment and others.
Insisting on the need to converge between various departments and agencies for taking care of the mining children, MM&P in a memorandum submitted to government of India ministers and MPs cutting across party lines, says, the issue becomes particularly precarious as “laws and policies related to mining do not address specific rights and entitlements of mining children.”

Pointing towards gravity of the problem, MM&P says, “India currently produces 89 minerals out of which four are fuel minerals, 11 metallic, 52 non-metallic and 22 minor minerals. Mining for fuel, metallic and non-metallic industrial minerals is currently undertaken in almost half of India’s districts.”
Currently one of the main industries that generate high revenues, the problem of mining children, says MM&P, has acquired added dimension, because the tribal and other marginalized communities have had to fight for their survival in mining areas, such as in Niyamgiri hills, where they were pitted against Vedanta and Posco in Odisha; Steel Authority of India (SAIL) in Salem, Tamil Nadu; iron ore mining in Goa; and coal mining in Chhattisgarh.
“It is in and around these mining areas that we find children the most vulnerable to the stark realities of extractive economy. These children are affected by mining, both indirectly and directly. It is these children who need our concern and attention and should be referred to as the mining children”, MM&P says.
It says, “Due to environmental pollution, children are most at risk to various health hazards due to silicosis, TB, structural birth defects, etc. Jodhpur and Makhna (Rajasthan), Rewa (Madhya Pradesh) and Panna (Maharashtra). Panna is also a classic example where both child mortality rate and maternal mortality rate are very high.”
According to MM&P, “While almost 50% of children across states are malnourished, malnourishment is widespread and acute in mining areas. Malnutrition is a problem in many places like Rewa and Udaipur (Rajasthan). In Panna, malnutrition among children is the highest out of all the mining areas.”
“Displaced homeless or living in inadequate housing conditions, forced to drop out of schools, children become easy target for abuse, exploitation and being recruited for illegal activities by mafia and even trafficking”, the memorandum, signed by MM&P’s Rebbapragada Ravi (chairperson) and Ashok Shrimali, secretary general, says, adding, “Cases of sexual abuse and trafficking among children are a harsh reality in all the mining areas.”
Then, it says, “Mining children are unable to access schools or are forced to drop out of schools because of circumstances arising from mining activity. Children’s education getting hampered and drop out problems are major concerns in many places like Jodhpur, Makhna, Udaipur, Rewa and Panna.”
Also, MM&P says, “Mining regions have large numbers of children working in the most hazardous activities. Since child labour is illegal these activities are mostly done clandestinely taking advantage of the poor condition of the community. Child Labour is prevalent in many places like Panna, Udaipur (Rajasthan) and Tamil Nadu.”
Pointing out that due to “large scale mining projects children are fast losing their constitutional rights under the 5th schedule, due to displacement, land alienation and migration by mining projects”, MM&P says, “The mining sector is largely dependent on migrant populations (who most often do not have any proof of identity) where children have no security of life and where children are also found to be working in the mines or other labor as a result of mining.”

India - Watchout for a factory of fake quotes - a dangerous trend
Free and fair: Saudi Arabia to build a women-only city
Activists Prepare to March Against Monsanto
Indian money in Swiss banks rise to over Rs 14,000 crore #WTFnews