The DPCO 2013 covers only 376 essential medicines in specific presentations and strengths. India’s domestic pharma market sales is about Rs 1.3 lakh crore per year. Perfect competition does not favour the patients Indian pharma’s boom period, which began in the early 1970s, has seen the annual turnover of the pharma industry shoot up from Rs 300 crore to Rs 1.3 trillion — even in real rupee value terms that is progress. (Source: File Photo)The editorial ‘No easy cures’ (IE, July 2) appears to argue that the scarcity of Furoped syrup is an indicator of the failure of price regulation and, therefore, price control ought to be abandoned. Presumably, once we junk the Drug Price Control Order (DPCO) 2013 and its implementing arm, the National Pharmaceutical Pricing Authority (NPPA), the market will work and all will be well. This is a regrettably incorrect argument as is the editorial’s chastising of the NPPA for having a “ham-fisted approach to price regulation” in stents and knee implants.

The idea of free market and perfect competition does not work in pharmaceuticals, and in health services in general — or in favour of the patient. The “choice”, such as it is, for the poorly-informed consumer is made by the prescriber and the pharma company. The state thus needs to intervene when the market fails. 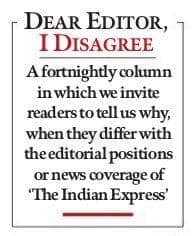 Several distortions have crept in because of the failure of pharma markets. The same medicine is sold at prices ranging from Re 1 to Rs 10 — in some cases Rs 100. Arguments about the cost of R&D to explain the high prices hold no water because at least 95 per cent of the medicines sold by Indian companies are out of patent.

The DPCO 2013 covers only 376 essential medicines in specific presentations and strengths. India’s domestic pharma market sales is about Rs 1.3 lakh crore per year. Less than 11 per cent is under price control. How can the tail wag the dog?

It is also wrong to say that the shift in a chunk of API (active pharmaceutical ingredient/bulk drug) manufacture to China occurred because of the DPCO 1995. The DPCO 1995 covered only about 74 medicines and half of which were medicines that the medical profession was not using before 1995. To address the loss of self-reliance in API manufacture, a relatively recent occurrence, policy recommendations of the government committees need to be implemented with some sense of urgency.

Indian pharma’s boom period, which began in the early 1970s, has seen the annual turnover of the pharma industry shoot up from Rs 300 crore to Rs 1.3 trillion — even in real rupee value terms that is progress. Price control should have hampered this growth to a hobble. But it has not.

In the current case, the API of frusemide (the generic name of the drug mentioned in the editorial) is being manufactured in India by at least a handful of companies and so are its tablets. The price of the API has increased recently by about Rs 500 to Rs 3,800 per kg. This does not warrant it going out of the market unless the ceiling price fixed earlier under DPCO 1995 by the NPPA was just barely viable. At the same time, the revised ceiling price fixed by the NPPA for frusemide syrup 30 ml at Rs 78 does not appear to have any relationship with the cost of inputs. It appears to be a monopoly price.

The basic problem, therefore, is that the ceiling price of price-controlled drugs is not directly related to the cost of the inputs, of which the cost of API is a big part. Currently, the ceiling price per DPCO 2013 is fixed by a rabbit that has been pulled out of nowhere — the simple average mechanism. It results in such absurdities as a ceiling price of about Rs 60 for 10 tablets of the cardiovascular atorvastatin of 10 mg, whereas its ex-factory cost price is Rs 3 per strip of 10 — a 2000 per cent margin. There is an urgent need to go back to the cost plus mechanism of the DPCO 1995 to prevent such runaway prices.

If the cost plus price control mechanism of the DPCO 1995 were in force, with real time access to API costs, the reported scarcity of frusemide syrup would not have happened. A fair price for the consumer and the manufacturer could have been ensured.

The havoc of unregulated pricing in pharmaceuticals is best exemplified by the US, which accounts for most sales of medicines in the world but with poor access to affordable medicines. In September 2015, Turing Pharmaceuticals, registered in Switzerland, and with offices in New York, raised the price of Daraprim (pyrimethamine, used in malaria and other parasitic diseases) from $13.50 to $750 a tablet. There was tremendous brouhaha in the US media that went up to the US Senate. The company thereafter offered discounts to hospitals that reduced the price by half — small mercy, but the Senate of the world’s most powerful country could not do anything because price control is anathema in its worldview. Incidentally, brands of pyrimethamine 25 mg with sulphadoxine 500 mg, sell at around Rs 2 per tablet in India — at a profit.

To conclude, here is a report from CNN on the excesses of a single drug, Acthar: “Medicare spent nearly $2 billion on Acthar from 2011-2016… even though some doctors say an equally effective treatment would have cost a tiny fraction of that amount. Medicare spending on Acthar from 2013-2016 accounted for nearly $1.8 billion.”

Do we want this kind of unregulated pharma market in India? No easy cures for sure but throwing the baby of price regulation with the bathwater is no cure.