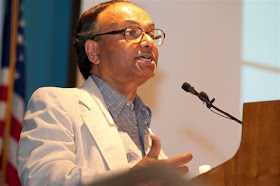 By Our Representative
A senior Indian American economist, Prof Pranab Bardhan, has said that, as against Prime Minister Narendra Modi‘s big promise of creating 100 million jobs to win the 2014 Lok Sabha elections, what one is witnessing today is a movement in just the opposite direction: “We have a total number of workers exceeding 50 million who are either unemployed or underemployed”, he has said in a comprehensive interview.
“This”, says Prof Bardhan, who is is at the graduate school in the department of economics at the University of California, Berkeley, “Doesn’t count the hundreds of millions of women, who are outside the labour force.” He adds, in India, in order to gauge unemployment, the surveyors only ask questions “about employment to only those who are part of the labour force”.

Pointing out that “the Gujarat model of high growth was not a particular exemplar in job creation”, Prof Bardhan says, the “Gujarat model, in spite of its high manufacturing growth, was particularly in sectors like petroleum refineries and petrochemicals, which are highly capital-intensive. They don’t create that many jobs.”

According to Prof Bardhan, “It is by now clear to many people that the pace of job creation has not been shining. In fact, some of the data — like the annual data produced by the labour bureau surveys — show that there may have been even some absolute decline in jobs”, adding, though, ” This is not new. Even for the last 40 years, job growth in India has been by and large rather sluggish.”
Coming down heavily on demonetisation, Prof Bardhan says, a “This has turned out to be one of the grandest hoaxes ever in Indian political history”, adding, surprisingly, the step came ” after insignificant progress in getting the black money stashed in foreign accounts or from repeated announcements for tax amnesty”

“The announced objective was to vaporise the corrupt cash hoarded by the rich. But then other objectives were also mentioned — to eliminate counterfeit money, to prevent terror funding. And when these things were not working, they talked about the need to digitize the economy. So, goalposts were changed over time.”

“Looking back now”, he says, ” We can say that most of the money has come back. This means that black money hoarded in the form of cash was tiny. Or, even if it was not tiny, it has been deftly returned through the backdoor with the complicity of corrupt bank officials.”
Prof Bardhan says, “Usually, most rich people do not keep their black money in cash. They use other means like real estate, gold, foreign account etc. I don’t know what gave the government the idea that most black money was stashed in cash”, adding, “To this day, the hardship that it caused has not been properly measured.”<

He underlines, “What was done was a cruel joke on the Indian poor, particularly those in the informal sector. I think demonetisation was a hastily-thought-out programme by some ignorant but arrogant people in Delhi and foisted on an unprepared and somewhat confused bank bureaucracy.”

“We have now data — not for whole of India though — on the extent of losses in jobs and wages”, Prof Bardhan opines, adding, “Take the textile hubs like Panipat in north India and Tiruppur in south India. Now, there is evidence of huge losses in trading as well as jobs. We also have evidence of small companies losing out and the informal sector failing to pay wages and workers going back to their villages.”

Critiquing those who say that tax returns increased because of demonetisation, Prof Bardhan quotes the Economic Survey as saying that “the average income level of the new tax payers was Rs 2.7 lakh, slightly above the tax threshold”, which suggests that “the new people brought under the tax net are not the superrich who have been evading tax all these years.”

According to him, “They are more likely to be relatively small people who have come under the tax net because of pressure from the banks to link accounts with the Aadhaar card and the PAN card and the Goods and Services Tax (GST) bringing some people in. So, it is not that fat cats were disgorging their illicit hoards due to demonetisation.”
https://www.counterview.net/2018/01/more-than-50-million-jobless-in-india.html

An Open Letter to AUD: "The many ways a student can be violated by an institution"
Poem on the diktat of #Delhi police chief #Delhigangrape #Vaw #moralpolicing
TEPCO sued over deaths of elderly patients during Fukushima evacuation
Disasters waiting to happen: 8 most dangerous nuclear plants