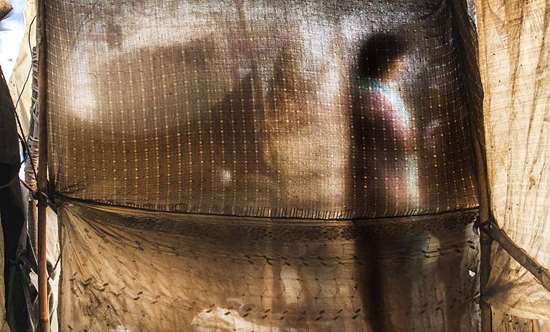 NARENDRA BISHT
Thin cover A woman victim at Loi
EXCLUSIVE | COVER STORY: MUZAFFARNAGAR
Thread Bared
They had invested hope in the village pradhan. He had said he’d protect them. Instead, what happened at his house during the morning of the riots will make you shudder. Outlook meets Muslim women at the camps, the faceless Nirbhayas of Muzaffarnagar….
NEHA DIXIT

Lakh Bawdi, a village in Uttar Pradesh’s Shamli district, 20 km from Muzaffarnagar town, is surrounded on three sides by harvest-ready fields of sugarcane as high as the average Indian, and a pond on the fourth. The joke in north India is that there is no better place to hide an abducted person than in a harvest-ready sugarcane field.

This harvesting season, however, the cane fields in Lakh Bawdi are throwing up tales infinitely more sordid. Like the partially decomposed, half-naked body of a woman found recently. It won’t be the first—more corpses will emerge as the harvesting season progresses.

Lakh Bawdi was among the villages most affected by the sectarian violence in Muzaffarnagar and Shamli districts in September, the others being Lisad, Phugana, Kutba-Kutbi, Kirana, Budhana and Bahawdi.

It’s a scene etched firmly in Abid Khan’s mind. “It was 7.30 in the morning,” recalls the 35-year-old from Lakh Bawdi. “A group of young men stopped outside our house and asked us to run away if we wanted to stay alive. We ran to Billu Pra­dhan’s house for help.” He is referring to Sudhir Kumar, the elected head of the village, better known as Billu Pradhan. 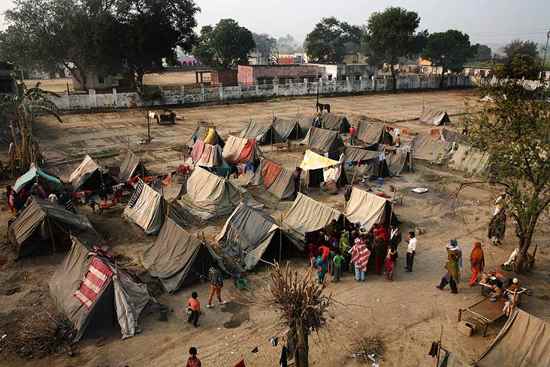 Lakh Bawdi has a total voting population of 9,500; most of the village’s 1,200 Muslims live beyond the fields, in an area loca­lly called pallipaar, working as agricultural labourers, carpenters, washermen, butchers, tailors. Sugarcane farming, the primary occupation here, is the preserve—and the privilege—of the land-owning Hindu (and a handful of Muslim) Jats.

Billu Pradhan’s is a sprawling mansion. We are constantly asked “not to leave” the pucca road while seeking directions to it. The road’s fairly new, the only metalled one in the village, and ends at the pradhan’s house.

To reprise the well-worn back story, things had been tense for a while, since the end of August. Word was a Muslim boy in Kawal village had ‘eve-teased’ a Jat girl (though some say it was a traffic-related incident). Her brother and cousin apparently avenged the slight by killing him, and were in turn allegedly lynched by an irate Muslim mob on the spot. Tem­pers ran high for days—the air rife with rumour, fake videos and all the modern complements of a riot in the making. Politicians led the chorus as provocative speeches and incitements to viole­nce rent the air at two ‘war councils’: a Muslim con­g­regation after Fri­day pra­yers in Muzaffarnagar town, and a Jat maha­panchayat at Kawal on September 7. The following morning, several villages woke up to the news that a Muslim mob had attacked groups of Jats returning from Kawal, killed them and dumped their bodies in the Jauli canal, a Muslim-dom­inated area. The news reached Lakh Bawdi too. “When we asked Billu Pradhan to protect us, he assured us that nothing would happen,” says Abid. “While some of us collected in his courtyard, others were asked to flee in a different direction.”

Billu Pradhan’s house has a well-manicured garden; nea­tly trimmed rose plants line its entrance. Three tractor tro­lleys are parked to the left, five buffaloes are tied on the right. The building has a separate visitor’s room, with charpoys and hukkahs—markers of Jat identity. There’s a big courtyard in the centre, the one Abid is talking about.

Around 30 people, including Abid’s mother and other women from the village, had come here that morning. Abid himself, along with 50 others, including his grandfather and uncle, had taken the route to safety the pradhan had sugges­ted. Except that a mob awaited them there. “My grandfather and uncle were killed in front of my eyes. Me, my father and other family members ran into the sugarcane fields to hide,” Abid recalls. Frantic, he’d cal­led the police on the mobile. “They arrived, but only at 12.30 pm, four hours after everything was over. Around 80 people from my village had been killed by then,” he says. They found Abid’s grandfather’s body on September 8 itself; his mother’s naked and mutilated body was found a day later, in a store heaped with dung cakes. That very day, Abid left for the makeshift camp in Loni in Ghaziabad district, 40 km from the national capital, along with the rest of the family members.

It may be difficult to corroborate the number of dead Abid quo­tes, but testimonials of several refugees from the vill­age, now in the 16 relief camps in Shamli and Muzaffarnagar districts, leave no doubt of the gruesomeness they encountered.

It’s raining the evening we reach the Idgah camp in Kandhla in Shamli district. A town dominated mostly by Mus­lims, the refugee camp is being supported largely by donations from locals. Several heaps of donated clothes lie soaked in muddy pools in the compound of the mosque as we enter. Over 12,000 people from the riot-affected villages have taken refuge  here. When the rooms in the madrassa couldn’t accommodate them, tents were set up. Except that when the rains came, water leaked through the tents and forced people to stuff themselves in the madrassa’s corridors.

Women occupy the first and ground floors. Sitting with a group of old women is Shabana, a thirtysomething from Lakh Bawdi. The left side of her face is dominated by a giant black-and-blue bru­ise, and she sits there, medicines given by the camp doctor in hand, the women around her exhorting her to take them. What happe­ned? “My house was burnt, three buffaloes were burnt too and my two sons are missing,” she says, in a tired and practised answer. What’s her name, what are her sons’ names, what happened to her and how did she esc­ape? Again, the same mechanical answer. “My buffaloes were burnt too.” Shabana is too traumatised to provide any immediate answers. After a full hour of reassurances and demonstra­ted empathy, she recounts what happened to her on September 8.

“They came at eight in the morning, a group of 20 men. I was cooking while my husband, a washerman, was about to leave for work. As soon as we heard the commotion, my husband, two sons and I fled. Even as we were running towards Billu Pradhan’s house, we saw our house being set on fire.” It was in this mayhem that Shabana lost track of her two sons. The couple reached Billu Pradhan’s house and were taken ins­ide the gated compound. “Within half an hour, a group of men from the village entered the compound and attacked us. They hacked my husband right before me.” Was she attacked? Shabana is quiet. I try again. This time, her voice a whisper, she says, “They stripped several of us. Took our honour.”

They first beat them with batons, then stripped them and brutally sodomised them. The men were stripped and simply chopped into pieces. Shabana and several others were thrown out, naked, an hour later.

“I and two other women hid behind a house,” she says. “I don’t remember what happened after that, except that a man from this camp gave me his kurta. He must be here. He is wearing a shirt,” she tells me, seeking him out with her eyes in the water-logged fields the balcony overlooks. 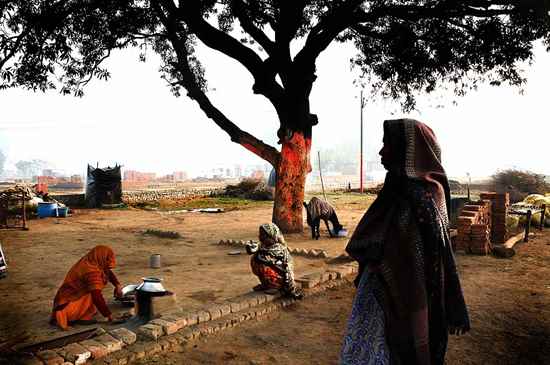 The plundered Sakira, at the Islamabad camp in Shahpur

She and other women were rescued in the trolleys Haji Wajid Hasan, chairman of the municipal corporation of the Kandhla block, sent off to the neighbouring villages. “They didn’t have clothes,” says Khurshida, a woman from Kan­dhla. “None at all.” Locals like her collected clothes from the neighbourhood that very evening. Shabana’s two sons, Tahir, a student of Class 5, and Shahid, who was in Class 2, are still missing. It has been three months.

Shabana’s, though, isn’t the only harrowing tale. Sabra, in her late 40s, recounts the same nightmare as her 12-year-old dau­ghter Saju listens on. She too has come to Idgah camp from Lakh Bawdi. “My husband Ajiman and his first wife Almiyat, who was also my elder sister, along with me and my three daughters, including Saju, were in Billu Pradhan’s house that morning. My elder son had asked us to stay there while he went to arra­nge a vehicle for us.” Sabra was married to Ajiman 10 years after his first marriage because her elder sister could not bear children. She worked at the neighbouring brick kiln.

“My husband was old and a tuberculosis patient,” she tells me. “We thought Billu Pra­dhan had been the head of the village five times and would help us.” Ajiman and Almiyat were attacked with a sickle on the neck within 15 minutes of entering the pra­dhan’s house. Sabra looks away as her eyes well up with tears. And your daughters? She purses her lips tight and shakes her head, refusing to say more. When I persist, the tears roll down her cheeks. “How can I tell you?” she says, looking at Saju, her 12-year-old. She then takes me aside, to the extreme corner of the compound. “If I tell anyone, who’ll marry Saju?”

A deep breath and fresh resolve later, she continues, “They first pulled my elder daughter and stripped her. Two boys dragged her to the ground and took turns raping her. Then they grabbed my second daughter and hit her private parts with batons. She started bleeding and was pushed to a corner. They then proceeded to assault the other girls.” “Aapa was engaged and would have gotten married today,” Saju tells me later. That day, when the gates were opened after an hour, Sabra rushed out with Saju and others into the jungles close by. They had to walk a whole day and night to reach Kandhla where the volunteers of the camp there came to their aid. This is where she found Rashid, her elder son, who on that day had gone looking for help, and who is out again today, to the Loni camp in Ghaziabad to look for his two sisters who have been missing since that morning at the pradhan’s house.

It is important to note that the first response at any of these camps to questions of sexual violence is immediate denial. In Gangeru, a small town in Muzaffarnagar district dominated by Shia Muslims, the Arabia-Islam-Hudru-Islam  madrassa has provided refuge to over 400 people from the 21 villages nearby. When asked if any of the women here had reported any cases of rape, Mohammed Sanaullah, the head of the seminary, tells me candidly, “Women have been raped and tortured, but it is my sincere advice to forget them. The families of these women will disown them if they come to know that they have spoken about it.”

When I reach the Gangeru camp, a group of women is sitting around Sabiha, who gave birth to her third daughter three days after reaching this camp. I asked them if they knew of any cases of sexual violence, and they all replied in unison, “We fled before it happened. But we know of other women who were brutally raped.” This attribution to other women when talking of sexual violence is consistent across camps. “In Islam, rape is treated like adultery,” Manzar, a local lawyer from the district, had told me earlier. “The women will not talk for fear of being accused of adultery.”