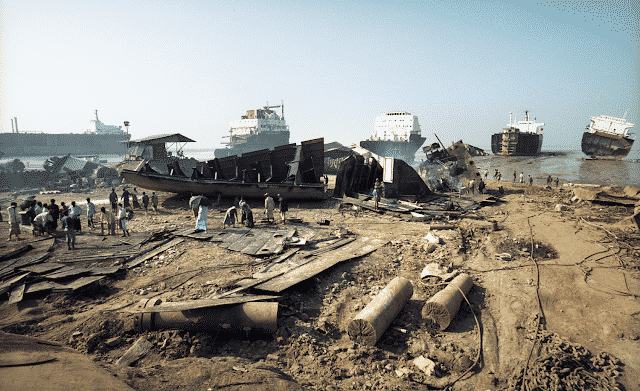 A virtual discussion organised by NGO, Toxics Link, taking strong exception to the refusal of the Government of India to ratify international ban on transboundary trade in hazardous waste, has said that the refusal to ratify the ban has come about despite the fact that “India took a significant decision of putting an import ban on plastic waste”, in what has come to be known as Basel Ban Amendment, adopted in 1995, and come into force last year, on December 5, 2019.

A Toxics Link concept for the discussion note warns, “There is a likelihood that India will become the dumping ground of hazardous waste in the name of recycling and creating job opportunities, which may have a far reaching impact on the environment and human health”, adding, “As India is not a party to the Basel ban amendment, it is losing out on playing a leadership role in the Basel Convention and the amendment discussion, which is critical from developing countries’ perspective.”

The Basel ban on the transboundary trade of hazardous waste includes most Persistent Organic Pollutants (POPs), most electronic wastes, most obsolete ships, most flammable liquids, and most toxic heavy metals. It will not likely include plastic, scrap metal or paper waste unless it is contaminated with, or containing a hazardous waste/material.

A detailed report, “The Basel Ban Amendment and Implications for India”, jointly prepared by Toxics Link in alliance with international NGOs, Basel Action Network and IPEN, says that India was one of the first countries of the global south in the early 1990s to call for a ban on export of hazardous waste to developing countries. It went so far as to notify the hazardous waste rules in 1989 before the Basel Convention came into force in 1992, and became a party to the Basel Convention in 1992.

Subsequently, the study says, India made amendments to their regulations in 2000 and in 2003 in order to properly align national law with the Convention. A revised version of the Hazardous Waste Rules was promulgated in 2008. The rules were further revised again in 2016, and now called the Hazardous and Other Wastes (Management and Transboundary Movement) Rules, 2016.

The report says, in March 2019, the country passed a complete prohibition on the import of solid plastic waste into the country, including the Special Economic Zones (SEZ) and by Export Oriented Units (EOU). Calling the plastic ban in SEZs and EOUs “an important step that the Indian government to protect its environment”, it regrets, “However, India does not have a national ban on the import of hazardous wastes” and as “still not ratified the Basel Ban Amendment, which will be critical in the context of global waste trade.”
A major reason why India is refusing to ratify the ban, it is a top destination for ship recycling. Its share of the gross tonnage of ships recycled worldwide is about 26%The report points out, India’s refusal to ratify continues despite the fact that some of the countries had earlier not ratified the ban such as China, Indonesia, Malaysia, Maldives and Sri Lanka, have now ratified it.
Strongly advocating ban, the report says, “India, as one of the emerging economies of the world, is having difficulty managing its own hazardous waste. Therefore it would be prudent to ratify the Basel Ban Amendment to prevent the possibility of more hazardous waste via imports. Because India is not a party to the Basel Ban Amendment, India does not benefit from the international cooperation such an instrument could provide to ensure countries do not use India as a dumping ground for hazardous wastes, including e-wastes.”

The report continues, “A simple implication of the amendment is that countries that have ratified the Basel Ban Amendment cannot export hazardous waste to India. However, countries that have not ratified the Amendment would have no legal obligation to not export their wastes to India unless India has erected the equivalent national bans and had notified the Basel Parties via the Secretariat. They would be required to receive consent from India.”

It adds, “However, if India does not ratify the Ban Amendment, the parties that have not ratified the Ban Amendment can export hazardous waste to India, following treaty obligations for prior informed consent.”

The report believes, a major reason why India has not favoured the ban is, “In India, waste recycling is a source of employment and livelihood for many people. There are a large number of formal and informal workers engaged in the waste recycling sector. Most of these jobs will be retained in India and will be made far safer.”
Another major reason is, asserts the report, “India is one of the top destinations for ship recycling. As per UNCTAD data in 2018, India’s share of the gross tonnage of ships recycled worldwide is about 26%. The Basel Convention considers obsolete ships as a form of hazardous waste and thus the Basel Convention, including the Basel Ban Amendment is meant to apply to these forms of waste as well unless they have first been pre-cleaned of hazardous substances.”

However, the report says, “Considering all environmental, public health and socio-economic costs, ratification of the Basel Ban Amendment would benefit India by internalizing those costs with those responsible for them.” It adds, “China has been a strong advocate of banning waste importation including obsolete ships precisely for this reason. India would be wise to follow suit.”