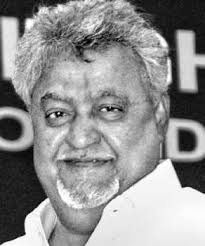 Text messages on What’s App have a strange way of blurring the line between the formal and the informal, the public and the personal. This one did the latter last Saturday evening: “Noted poet and Dalit Panthers leader Namdeo Dhasal in hospital… colorectal cancer… family finding it difficult to raise funds for treatment (which) will cost around rupees six lakh”.

Dhasal is no stranger to illness, even of the debilitating sort, after having lived with myasthenia gravis and other ailments for years; nor is he an outsider to the world of modest means though his immediate past lifestyle in a suburban apartment, sports car and armed bodyguard would have many believe otherwise.

Whatever turns and twists his life of poetry and politics has taken in the last four-and-a-half decades, Dhasal seems to have sheltered some of the rawness, rage, rancid quality of his early life on the margins of the city’s red-light district Kamathipura, so evocatively and offensively extracted into his poetry, first into the award-winning ‘Golpitha’ and repeatedly then in his nine collections of verse.

His work fetched him the Padma Shri and the Lifetime Achievement Award of the Sahitya Akademi. His poetry of the untamed and ugly, savage and sexually-explicit, sewer-slice of Mumbai provoked fierce debates on the poetic and literary value of Dalit verse and prose. It is what his fellow-poet, translator and friend – though they robustly disagreed on many things – Dilip Chitre termed “unique ethno-linguistic cocktail” and insisted that “Golpitha occupies a position equal to that of TS Eliot‘s ‘The Waste Land’, not only in Marathi but in pan-Indian poetry and it could have been written only by a Dalit”.

Dhasal fused his poetry and politics, life and activism, professional and personal with such incisive and unforgiving rigour that it became difficult to fathom the U-turns he often took in his political choices. He strutted on the Shiv Sena stage; it was at complete variance with his rant against all that the party stood for. What were we to make of the Dalit Panthers joining forces with the Sena? Then, in an equally maverick stroke, citing affront to his stature, Dhasal de-merged his party weeks before the city was to vote for the Brihanmumbai Municipal Corporation in February last year. No one seemed to care much.

But care we must. For, in Dhasal, Dalit poetry and politics found the space that other Dalit writers/poets had not enjoyed or Dalit cause-espousing parties were not able to cleave. It’s unlikely that Dhasal holds much political value for any party or existing alliance or possible coalitions. Bound to the wheel-chair and dependent on caregivers – most consistent being his wife Mallika Amar Shaikh – Dhasal has been relegated to the past of the city and its raging romance with young Dalit leaders, but Dalit politics has to chart its future.

Dalit politics in the land that shaped Dr BR Ambedkar, tugged between the likes of Dhasal, Prakash Ambedkar and Ramdas Athavale, is in shambles. Dalit poetry has aged better; its legacy remains more enduring. The state government that pulled out all stops to get approvals for the Ambedkar memorial earlier this year can – and must – extend its generosity to the man who became the face of the searing Dalit poetry. Beyond that, it would be in the fitness of things if Dhasal’s lines ‘Man you should explode… Jive to a savage drum beat’ were to become the new anthem of the Dalit youth