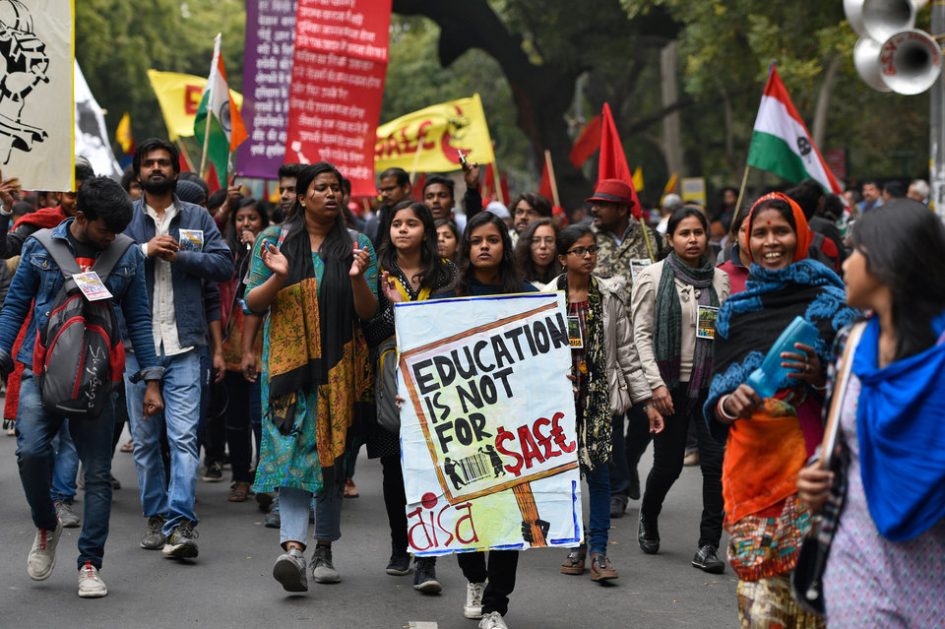 In a document like the New Education Policy, one must distinguish platitudes from new provisions, including the dropping of old platitudes. Thus, phrases like “education is a public good”, “6 per cent of GDP should be earmarked for education” are just platitudes, unless some concrete suggestions are advanced to realise these.

In short, repeating old platitudes is inconsequential; it is only not repeating them that has some significance, but such inconsequential repetition of old platitudes in the New Education Policy has impressed many otherwise well-informed observers, which explains the strange phenomenon of their according some approval to a policy that is downright reactionary and represents an obvious retreat from the goal of laying the foundations for an egalitarian society.

This retreat takes the form, above all, of exclusion of the socially and economically deprived sections from the ambit of education. There is scarcely any mention of affirmative action in the form of reservation for the socially oppressed anywhere in the document. And given the way reservations are being given a quiet burial in universities, such as Jawaharlal Nehru University, directly under the nose of the Central government and hence undoubtedly with its tacit support, the trend towards the exclusion of students from Dalit and OBC (Other Backward Class) backgrounds is unmistakable.

There is in additional exclusion for economic reasons, through the privatisation of education, which the New Education Policy encourages. With “autonomy”, including financial autonomy, proposed to be granted to numerous colleges, they would obviously garner funds by charging higher fees, which would make them out of bounds for students from poor economic backgrounds, including those from the oppressed castes.

The proponents of the policy may contend that there will be scholarships for poor students, so that the better off students would in effect be cross-subsidising them. But, if at all such a scheme is implemented, given the investment required for making these institutions attractive enough for the well-to-do students, the fees charged to them, both for financing investments and for financing scholarships, will have to be very high.

This will create a social cleavage among students (“my fees are going to educate you”), destroying all collegiality. The obvious solution, of having publicly funded institutions with government scholarships, is precisely what the NEP, operating within the ambit of neo-liberalism, is moving away from.

Hence, the impecunious students will either be completely excluded, or remain in such institutions as second-class students, derided by the better-off students until they eventually drop out.

Interestingly, in the Draft NEP of 2019, on which the current NEP is based, there were sentences expressing disapproval of private non-philanthropic educational institutions. But, in this final version, those sentences have been removed. Likewise, in the initial document released by the government as the final NEP, there were references to the Right to Education, but these, too, were removed in the version put out on the government website.

In fact, the NEP plans explicitly for the dropping out of students, which would inevitably occur according to us, though it camouflages such dropping out as an exercise in “flexibility”.

The policy provides for a four-year undergraduate programme, though the reasons for having such a programme are wholly unclear. Such a programme was introduced in Delhi University by the then HRD minister Kapil Sibal, under the Congress-led United Progressive Alliance-II government, and had aroused much opposition.

It was withdrawn by human resource development minister Smriti Irani during the tenure of the first Narendra Modi-led National Democratic Alliance government, but has now been inexplicably reintroduced for the entire country!

Within this programme, however, students can drop out after the first year with a certificate and after the second year, with a diploma. There are, however, no one-year or two-year programmes as such that are being offered. So, anyone dropping out would be doing so in the middle of a four-year programme after having done just a few courses.

What the NEP does is thus to legitimise dropping out, except that it promises a piece of paper as a sort of consolation, called a certificate or a diploma, to students who are dropping out. These pieces of paper will not enable their holders to lay claims to any worthwhile jobs; and one or two years in college, which is all they would have spent, will not provide them any worthwhile education, not even any worthwhile experience of “college life”.

In effect, therefore, the idea of NEP is to produce a whole army of barely-educated persons, who would only be given the illusion of being “educated”. And these persons would typically belong to the socially and economically deprived categories.

This is a travesty of the social vision that independent India had set itself, of making education accessible to all as part of the country’s new awakening. Likewise, the policy of pushing people into career-oriented courses, into vocational training even before they have had a minimum number of years of general education, is typical of a government that wishes to wash its hands of its responsibility towards young persons.

It offers them neither a proper education so that they can become citizens of the republic, nor a proper job. It just wants to dump them on the market with a modicum of training, and then let them fend for themselves.

This exclusion also makes a mockery of the NEP’s provision that school students, for the first few years, should be educated in their mother tongue, which may be a local language different from the language of the state to which they belong.

This idea, which might otherwise have been a welcome one, requires as a complementary measure some assurance, through an appropriate policy of reservation for instance, that those receiving such education will not be at a disadvantage in going further in their educational careers. But in the absence of any such reservation, learning in one’s mother tongue may well turn out simply to be a ghetto to which the non-elite students would get consigned, without much chance of progressing further.

But it is not just the de facto dichotomy that the NEP introduces among the elite and non-elite students that is reprehensible. Its very philosophy is to make people accept such dichotomies.

Likewise Niskama Karma may inform one’s personal philosophy of living; but if it is taught as part of a curriculum to every student, then that inevitably amounts to playing down exploitation; if a factory worker’s child is taught that Niskama Karma is an ideal, then that child will have little sympathy for his or her father’s going on a strike for higher wages.

The purpose of education must be to create a better world. To do so, one must be dissatisfied with the existing world. Making one adjust to the existing world, or, worse still, to a world that had existed earlier but which the people are engaged in transcending through their praxis, is a reactionary project in the realm of education. The NEP promotes such a reactionary project.

The children of the elite will become conformist servitors of international finance capital in executive positions; the children of the excluded, the socially and economically under-privileged, will become conformist members of the working classes, among whom a shrinking number of jobs will be rationed out, but who will lack the intellectual wherewithal to fight against their predicament effectively. This is an inappropriate philosophy of education in any country, especially in a country like ours.

In the name of flexibility, inclusion, reduction of burden on students, and such like, what is being attempted is the very opposite: exclusion and reconciliation to the state of being excluded. In fact, one would understand NEP better if one approached it differently.

The introduction of a homogeneous mass education is a requirement of capitalism, which entailed substantial mobility of personnel in contrast to the feudal era, when people scarcely went out of their villages or local areas. Capitalism still needs such an educational system that would impart a homogeneous education to equip a person to serve the needs of capital, no matter where s/he is.

But education on a much larger scale would be entailed in the programme of “universal education” that independent India had promised, compared with what the operation of capitalism per se needs today.

The objective of an education policy under neoliberal capitalism, therefore, is to educate people merely on the scale required by capital, and to renege, through various subterfuges, on the promise of universal education. One would understand the NEP better if one approached it by looking for such subterfuges, namely how it reneges rather than what it says.