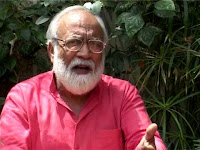 By Our Representative
The new education policy (NEP), to be unleashed by the Government of India next year, is likely to provide free education only for one per cent of the so-called meritorious and one per cent of the needy, one of the most well-known educationists, Dr Anil Sadgopal, has alleged at a lecture he delivered at the Indian Institute of Management–Madras (IIT-M).

Organized by the IIT-M’s Ambedkar-Petiyar Study Circle (APSC), which was temporarily banned for organizing lectures and discussions uncomfortable to the Modi government, Dr Sadgopal told the gathering that under the garb of liberalization and deregulation, “foreign educational institutions” were sought to be allowed to grant degrees in India by “importing subject experts from the industry and foreign academia.”
Pointing out that for “content generation” online repositories like Massive Open Online Courses (MOOCs) would be used, Dr Sadgopal, who is chairman of the All-India Forum for Right to Education (AIFRTE), said this would “trash” job security of local teachers and gradually push them out as “an endangered species.”
Opposing “digitization of education and networking of institutes through ‘Digital India’,” Dr Sadgopal said, under the new system, the students would no longer be “stake holders in education”, but would be at the mercy of “foreign universities, multinational companies (MNCs), corporates and private industries.”
“Though, students rush to MOOCs with an idea that it is ‘open’ and a public property which anyone can access ‘at anytime’, ‘from anywhere’, and ‘acquire knowledge as if they wish’, the whole education establishment will be scrapped down, as MOOCs is a ‘disruptive innovation’ for the corporate like Coursera to loot”, Dr Sadgopal said.
“Vocationalisation of school education from eighth standard in the name of skill development would push majority of the children of toiling masses into informal labour”, the top educationist apprehended adding, “We need to ask the question whether ‘Make in India’ will ride on the back of exploitation of such unorganized informal labour.”
“Finally”, Dr Sadgopal said, “Subjecting education to international trade rules would lead to the loss of authority of the national and the state governments to regulate education according to the nation’s needs and priorities.”
Pointing out that all this is being done by stating that the existing educational establishment is “incapable of and has failed in supplying skilled human capital to the labour market”, Dr Sadgopal said, “NEP is a move towards demolishing the academic establishment of the nation phase by phase.”
He said, “Phases will start with grabbing the power of the states to legislate and administer education through the unification and centralization of pedagogy and curriculum”, followed by “dissolving the power of syndicates/senates and disaffiliating colleges from Universities, turning them into skill instruction based community colleges; stopping fund allocation and dissolving the UGC.”
In fact, Dr Sadgopal believes, “NEP 2015 is a move towards the implementation of the World Trade Organisation – General Agreement on Trade in Services (WTO-GATS) dictates before its ministerial meeting in December 2015. While recolonializing our nation by implementing the WTO-GATS dictate, under that umbrella, Hindutva forces are planning to reestablish caste system and revive the brahminic hegemony.”
“The composition of the four member NEP drafting committee itself is revealing in terms of what the government’s agenda: three members are bureaucrats and only one is an academician – who is none other than RSS and Hindutva ideologue Dinanath Batra”, Dr Sadgopal said.
http://www.counterview.net/2015/11/just-1-meritorious1-needy-to-gain-from.html?m=1

Kasab, Bajrangi and the case against the #deathpenalty
#Deathpenalty cannot be fairly implemented in the US. Is India different?
Haryana man kills wife for denying sex #WTFnews
Arrest Imminent for Indian Cartoonist and Blogger Aseem Trivedi by MUMBAI POLICE #FOE #FOS