India – No funeral in Kashi without #Aadhaar #WTFnews 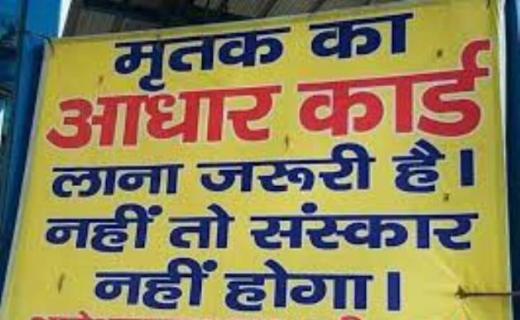 The  adhaar card of the deceased has been made compulsory for Manikarnika and Raja Harishchandra Ghat for funeral in Moksh Nagri Kashi. It is being told that now the identity cards for the Aadhar card or the deceased has now been made compulsory for the carcass (Motorboat) facility in Kashi. This new system has been started in collaboration with NDRF.However, the identity card is not necessary at present for burning the body on the Mahashmashan.

A large number of bodies are brought to the funeral from the surrounding districts, besides local people, on Mahashmashan Manikarnika and Harishchandra Ghat of the Parliamentary Constituency of Benaras. In such a way, the Sudhanshu Foundation of Gujarat has come forward to provide development of Manikarnika Ghat and to provide relief to the dead bodies.

At present, four steamer “corpse corps” have been provided to the Ganges to bring the bodies to Mahashmashan on behalf of the Foundation. Under this arrangement, people are taken to Bhainansur Ghat before taking bodies and from there they reach Manikarnika or Harishchandra Ghat from the corpse. This arrangement has been done to get the city out of jam.

So that the last rites could not be stolen

Foundation Coordinator Gulshan Kapoor said that Aadhar card or any other identity card has been made mandatory for the corpse. This step was taken after the information that in the case of murder, dowry death or even in a mysterious situation, the funeral is being done by bringing the burglars to Banaras.

The only basis for this thing is mandatory

On the other hand, Vishal Chaudhary of the Domraja family told that no introduction letter is necessary for burning the dead body at Manikarnika or Harishchandra Ghat. Under the first arrangement, a fire is being offered for the funeral. It has been said on behalf of the family that the Aadhar card has been made mandatory for those who come from the ancestral body of the body..