We are under attack from Western culture, our culture doesn’t teach us to wear jeans,’ BJP MP Raghunanandan Sharma tells Rediff.com‘s A Ganesh Nadar. 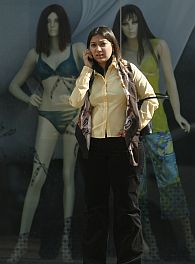 Bharatiya Janata Party MP Raghunandan Sharma has come up with the following suggestions to check crimes against women: Girls should not be allowed to use mobile phones before marriage and women should not wear jeans.

Sharma — a member of the Rajya Sabha and vice-president of the BJP’s Madhya Pradesh [ Images ] unit -expressed his views at a meeting of Brahmins in Ratlam district on Sunday.

The BJP MP termed mobile phone usage by students, particularly young girls, as a big menace and the genesis of other evils.

Sharma lambasted girls wearing jeans, saying it was the attire of American cowboys and in no way gelled with Indian culture.

Sharma, who was born a year before Independence, told Rediff.com on Tuesday, “I don’t know what the problem with you journalists is. I was at my samaj meeting. It was a meeting of my society of Brahmins.”

“I am a representative of the Brahmins and I am their leader. I was trying to suggest ways to improve my society. The advice was only for Brahmins, not for the country.”

“I was speaking not as a MP or a BJP leader, I was speaking as a Brahmin to other Brahmins. I have my ideas of improving my society, what is your problem?”

“We are under attack from Western culture, our culture doesn’t teach us to wear jeans,” Sharma added.

“I have every right to tell my society of Brahmins how to dress, not to use mobile phones and whatever I think is good for my society.”

“Nowhere did I suggest that I am trying to change the country, change my party’s views or change my state’s views. This was advice only for my people and meant only for them