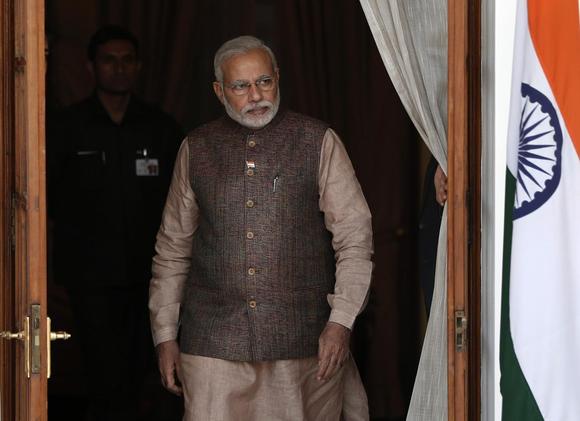 India’s Prime Minister Narendra Modi comes out of a meeting room to receive his Bhutanese counterpart Tshering Tobgay before the start of their bilateral meeting in New Delhi May 27, 2014.

(Reuters) – India is expanding a covert uranium enrichment plant that could potentially support the development of thermonuclear weapons, a defense research group said on Friday, raising the stakes in a regional arms race with China and Pakistan.

The revelation highlights the lack of nuclear safeguards on India under new Prime Minister Narendra Modi, while sanctions-bound Iran faces minute scrutiny in talks with world powers over its own nuclear program.

The facility, located near Mysore in southern India, could be operational by mid-2015, the research group said, basing its findings on analysis of satellite imagery and public statements by Indian officials.

“Taking into account all the enriched uranium likely to be needed by the Indian nuclear submarine fleet, there is likely to be a significant excess,” Matthew Clements, editor of IHS Jane’s Intelligence Review, told Reuters.

“One potential use of this would be for the development of thermonuclear weapons.”

No comment was available from the Indian government press office or the foreign ministry.Pakistan reacted with consternation, with a senior aide to Prime Minister Nawaz Sharif saying the news underscored India’s “established hegemony.”

“This is something that India has been trying to develop for a long time,” said Tariq Azeem. “We don’t want any nuclear race. That doesn’t bode well for either country.”

Unlike Iran, India is not a signatory to the nuclear Non-Proliferation Treaty. New Delhi tested its first nuclear weapon in 1974, provoking international sanctions that barred it from importing nuclear technology and materials.

It conducted tests again in 1998 that drew a quick response from Pakistan, triggering an arms race between the neighbors, who have fought three wars since independence in 1947.

A civil nuclear cooperation deal with the United States, sealed in 2008, gave India access to know-how and fuel in return for a pledge – so far unfulfilled – to bring in U.S. firms to expand India’s nuclear power generation capacity.

The pact exempts military facilities and stockpiles of nuclear fuel from scrutiny by the International Atomic Energy Agency, a United Nations watchdog. The Mysore plant is not subject to IAEA safeguards. The IAEA declined to comment.

The exemption, granted by the administration of former U.S. President George W. Bush, faced opposition from China and Pakistan – India’s regional rivals – as well as European countries, which said it would undermine efforts to control the spread of nuclear weapons.

In Washington, a State Department spokeswoman played down the IHS Jane’s report, saying the United States remained committed to its civil nuclear deal and strategic relationship with India.

“It’s one report … We’re not in a position to speculate on its conclusions,” said State Department spokeswoman Jen Psaki.

“We remain fully committed to the terms of the (civil nuclear) agreement and to enhancing our strategic relationship,” she added. “Nothing we provide to India under the civ-nuke agreement may be used to enhance India’s military capability or add to its military stockpile, but we don’t have enough information or confirmation of the report to speak to that.”

Based on its analysis of commercial satellite images, IHS Jane’s has identified what appears to be a new uranium hexafluoride plant that would increase the uranium enrichment capacity of the Mysore facility.

The plant would be able to produce a surplus of around 160 kilos a year of uranium enriched to 90 percent purity, IHS Jane’s reckons. That is roughly double the needs of the nuclear submarine fleet that India is developing to supplement its land-based missile arsenal – and enough to make five atomic bombs.

By blending the uranium with its existing stock of plutonium, India could develop thermonuclear weapons that have a more complex detonation process and greater force than simpler weapons.

“Whether or not India uses the plant mainly for fuel for reactors and naval vessels as is sometimes surmised, it adds to India’s already far greater advantage over Pakistan in terms of nuclear weapons production potential,” said Mark Fitzpatrick, director of the non-proliferation program at the International Institute for Strategic Studies.

“It also brings India closer to matching China, which is how most Indians would probably see it.”

The IHS findings have been corroborated by other analysts, with the Stockholm International Peace Research Institute (SIPRI) writing this week that the Mysore facility could signify India’s intent to move toward thermonuclear weapons.

India is estimated by SIPRI to hold 90 to 110 nuclear weapons in its arsenal.

The IHS Jane’s assessment revealed incremental progress at Mysore since the Washington-based Institute for Science and International Security (ISIS), in a report last December, identified the construction of a new gas centrifuge plant.

India’s new Arihant class of submarine is assessed to have an 80-megawatt onboard reactor that contains around 65 kg of uranium. One submarine is operational, a second is being built and a third is planned, according to ISIS.

Modi, leader of the nationalist Bharatiya Janata Party, in his first weeks in office has sought to assert New Delhi’s regional leadership while seeking to engage with major powers, such as the United States and China.

But although he invited Pakistan’s Sharif to his inauguration, Modi has made clear that any rapprochement would require a halt to occasional military clashes on the de facto frontier of the disputed Himalayan region of Kashmir.

Before Modi’s landslide general election victory last month, sources close to his party had suggested India might abandon its “no first use” nuclear doctrine, which committed it to refrain from any pre-emptive strike.

Modi later denied any planned shift and vowed to uphold no first use, a signature policy of India’s last BJP prime minister, Atal Bihari Vajpayee, who ordered the 1998 nuclear tests.

#India - For your #biomerics #UID - do the Eyes really have it? #Aadhaar
After all this fuss, I-T may only probe 1% of assessees #WTFnews
Modi Sarkar - Bitter medicine for poor, advantage Pharma
#India - Effective PDS lifted 38 million people out of poverty in 2009-10