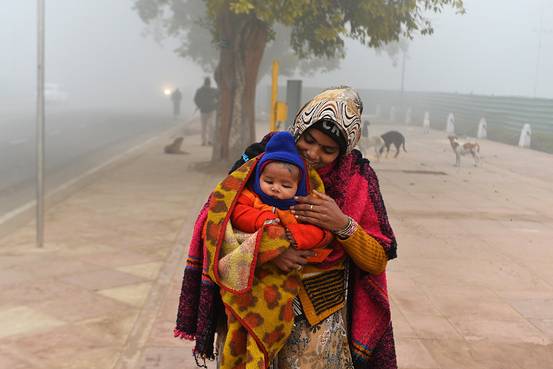 An Indian woman carried her child in New Delhi on Jan. 2015.

It’s getting tougher for mothers in India, according to a global ranking of the best and worst places to be a mom.

India scored 140th place out of 179 countries in the charity organization Save the Children’s 2015 report titled “State of the World’s Mothers” putting it behind Zimbabwe, Iraq and Bangladesh.

In 2014, India was 137th out of 178 countries in the global mother’s index that measures countries on four indicators of moms’ wellbeing: risk of maternal death; under-five mortality rate; expected number of years of formal schooling; the gross national income per capita and participation of women in government.

According to Save the Children, Indian children on average spend 11.7 years in formal schooling and 52.7 out of 1,000 children in India die before their fifth birthday.

This year, as last, the top of the table was dominated by European countries and Norway replaced Finland at pole position. The United States ranked 33rd.

The report, for the first time this year, looked at the different access to health care for children from rich and poor families in cities across the world. It found those living in Delhi were among the most unequal with large gaps between health provision for the poorest and the richest.

“It’s a tale of two cities: the wealthy who are doing well and then the marginalized who are largely living in slum-like conditions,” said Robert Clay, vice-president for global health at Save the Children.

In Delhi, “it’s the survival of the richest, they have the advantage and the poor are not getting access to essential services,” he added.

Only 56% of the poorest children were vaccinated for measles in Delhi compared to 98% of the richest children, the report said.

“While private high-quality sector health facilities are more plentiful in urban areas, the urban poor often lack the ability to pay for this care,” the authors said.

“Public sector health systems are typically under-funded, and often fail to reach those most in need with basic health services,” the report said. “In many instances, the poor resort to seeking care from unqualified health practitioners, often paying for care that is poor quality, or in some cases, harmful.”

On average, according to Save the Children, children living among the urban poor in India have a lower under-five survival rate (85 deaths per 1,000 live births) than children in rural India where child mortality stands at 82 deaths for every 1,000 live births.

“Most policy makers feel that urban areas offer more opportunity,” said Mr. Clay. “But a lot of people who migrate because of opportunity get lost and those are the ones we need to focus on.”

Modi Sarkar discusses military training plan for 10 lakh youth #WTFnews
Modi Sarkar, of the People, by... the Consultancies
Koodankulam Alert 22 nd March 2012
With provision for jail term, clinical trial norms to get a shot in the arm #healthcare