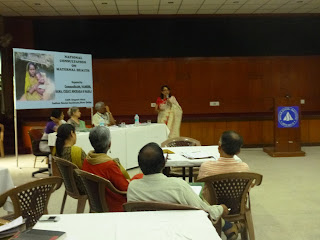 On the first day, health activists and civil society organizations came together from various states including Jharkhand, Gujarat, Maharashtra, Uttar Pradesh, Karnataka, Tamil Nadu to share experiences on various government schemes and policies as well as concerns with implementation and accountability within health systems. The following concerns came out during the discussions:
●        In spite of the fact that the poorest and most vulnerable women are the most affected, the government has fallen short in addressing maternal health with a comprehensive strategy and being accountable for it. Specific issues need specific focus for example malaria prevention, sickle cell anemia screening, blood storage, hot cooked meals.
●        Undignified treatment of women during childbirth from minorities particularly has been reported from various parts of the country, which makes them reluctant to use public health facilities.
●        Several issues that affect maternal health – such as access to abortion services, access to choice of contraception, dignified childbirth, domestic abuse, nutrition, poverty, caste and gender – remain blind spots in policy. Thus, the solutions proposed often fail to capture or be relevant to the lived realities of women.
●        Maternal death reviews, though mandated since 2010, are not being carried out in several states, especially in rural areas or in the private sector.
A set of recommendations were then developed on the cross cutting themes about some aspects of the maternal health care situation that were presented to the policy makers on the following day.
Key recommendations:

Dr. Syeda Hameed, Member Planning Commission and Shri Keshav Desiraju, Secretary MoHFW attended the event. Dr. Syeda Hameed acknowledged that civil society groups in India play a crucial role in strengthening government systems. She added, Planning Commission is considering strengthening its convening role with multiple Ministries on urgent cross-cutting issues, for example, health and nutrition (MoHFW and WCD). She suggested that the issues and recommendations be shared with the NRHM Mission Steering Group meeting that would be held soon in August.

Addressing the gathering Shri Keshav Desiraju, stated that while the Government’s policy had led to a reduction in maternal mortality, it was also true that focusing on Institutional delivery numbers alone had led to neglecting what happened to women and children after the birth.  He also acknowledged that it was important to strengthen a team in communities to support safer home births, such as ASHA, ANM, SBA and local TBAs. He promised to revive the Technical Resource Group on Maternal Health that had been set up by the MOHFW two years ago.