#India – Outside Mumbai, Reports of Rape Buried in Pages of Newspapers #Vaw

By THE NEW YORK TIMES 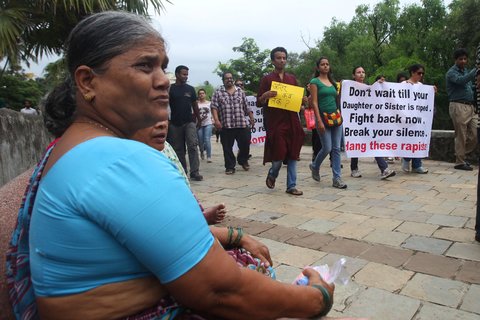 Rafiq Maqbool/Associated Press People watching as youth demonstrate on Sunday against the gang rape of a photojournalist in Mumbai, Maharashtra.

It was a familiar scene in the lower house of the Indian Parliament on Monday as Sushma Swaraj, the Lok Sabha leader of the opposition Bharatiya Janata Party, demanded the death penalty for the five men who allegedly gang-raped a 22-year-old photojournalist in Mumbai last week while she was on assignment for an English-language magazine.

A similar outcry ensued for weeks in the national legislature after a 23-year-old physiotherapy student was brutally violated by six men on a moving bus in December. She later died from the injuries. The gang rape sparked nationwide protests demanding better security for women, which forced the government to toughen laws on sexual violence. But little seems to have changed despite the new legislation.

As the photojournalist recuperates in a Mumbai hospital and all the five suspects have been arrested, national attention continues to focus on the case. However, according to one media report, through an anonymous letter the victim’s family has appealed for privacy.

A paragraph in the letter reads:

I have one small request to all of you. Please continue to respect the privacy of my daughter and me in this most trying time of our lives and give us the breathing space we so desperately need by not visiting our residence. We live in a society where such actions will only make it more difficult for us to get back to normal life. This can also impact my daughter’s life and become an impediment in our struggle to regain our sanity and composure.

The occurrence of a rape in Mumbai, which has for years been perceived as a relatively safer city for women in India, made it to the front pages of the nation’s newspapers, but reports of sexual assault elsewhere in the country found scant attention last week, buried in a far less prominent spot in newsprint.

A laborer allegedly raped his 3-year-old daughter in Jaipur in the northern state of Rajasthan on Wednesday and dumped her outside his house afterward, according to a Press Trust of India report in the Hindustan Times. Some passers-by spotted her and took her to a local hospital. The girl’s mother, who was asleep when the rape took place, informed the police and had her husband arrested, the report said.

In neighboring Haryana, a girl from Narwana village in Jind district told the police about a sexual assault by her college classmate two-and-a-half months back, a Press Trust of India report in Daily News and Analysis said on Saturday. In her complaint, she said that she took up the offer of being driven home by the suspect, who instead took her to his friend’s house, where she said she was violated. The police have registered a case, the report said.

A 25-year-old woman from Sangolda village in the western state of Goa, who had impaired hearing and a speech disability, died Saturday, six months after being raped, The Times of India reported. The local police registered a rape case on Saturday against an unknown person, the newspaper reported.

In another case of sexual violence, the police said a 16-year-old tribal girl was raped and stabbed in the throat on Aug. 20 in the southeastern state of Orissa’s Nayagarh district, according to a Press Trust of India report in Daily News and Analysis. The police said the assault took place at an isolated spot near a local police station in the Kandhamirigi village, where her family found her lying in a pool of blood. Her condition was critical, the report noted.

As the number of reported sexual assault cases rises in India, what do you think should be done to make Indian cities safer for women? Tell India Ink in the comments section below.